“Unfortunately, Cincinnati was in the midst of a freezing rainstorm, but we were set on going through with this unusual father-daughter activity.”

The last time my father—who identifies as a Constitutionalist—and I spoke about politics, our phone conversation got so heated I found myself yelling into my iPhone and crying on a random Manhattan street corner. This was right after the 2016 Presidential Election and we, like many other families, were a household that became extremely divided. But a year later, during a period of major depression, I asked my dad if he would come to psychotherapy with me in New York. As we sat across from each other in my therapist’s office, we slowly began addressing issues including my parents’ divorce and his own battle with depression. Though it was a difficult conversation, I realized our differences in political opinion were just the tip of the iceberg, and since then, we’ve been able to break down the walls that once divided us.

When I realized I was going to be visiting my dad in Cincinnati, Ohio while the 2019 Women’s March was taking place, I decided it would not only be interesting to witness it in a red state, but also, to take my dad along for the ride.

While I had enthusiastically traveled to Washington DC for the first Women’s March, filling up five disposable cameras with pictures, and had proudly attended the last one in New York with a sign in hand, I wasn’t so sure about going to the Women’s March this year. As a Jewish woman, I had heard the anti-Semitism allegations leveled at the March’s leaders, and while in the past the protest had felt effective and inspirational, I believed that this type of performative activism had lost some of its luster. But when I asked my dad he would go to the march with me, I was delighted to find that he agreed to attend. In the days leading up to the event, he sent me countless articles about it, while I excitedly told other family members and friends about our upcoming plans. “Get him one of those pink pussy hats!” my mother, who leans more liberal, joked over the phone.

The day I arrived in Cincinnati, we discussed the march over a shared salad and soup. My dad asked what I hoped to get out of the experience, and I explained that the point was to experience it alongside him and see what we might learn about each other. Still, I voiced my concerns about the aggression I had perceived in our past conversation, and he reassured me I had absolutely nothing to worry about. He was there to solely support me.

On the day of the march, he arrived at my room with a bright yellow raincoat for each of us to wear. Unfortunately, Cincinnati was in the midst of a freezing rainstorm, but we were set on going through with this unusual father-daughter activity. 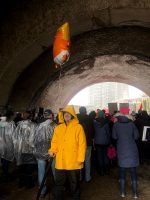 As we pulled up to the march in his car, we noticed a few other folks walking with signs and massive umbrellas. “They must be coming from that way!” my dad announced.

Upon arriving, we surveyed the small crowd huddled under the bridge in downtown Cincinnati, which I estimate was around 100 people. I heard one woman say there were over 10,000 people at the last one. But bad weather and other extenuating circumstances such as disputes over permits had gotten in the way of this year’s plans, forcing the Ohio chapter of the Women’s March to call off its event and a few local socialist organizations to step in.

Catching the very end of the rally, I peered endearingly at my father as he took in his new and unusual surroundings. He listened closely to the speeches, making small, harmless comments here and there. His expression was light, and he was curious about the different platforms of the various organizations participating. “Let’s go find out what they’re all about!”

At his suggestion, we each took one side of the space, asking for brochures and pamphlets in effort to better educate ourselves. Then, a woman began talking to us. I was nervous to see how my father would react and converse with anyone at this liberal-minded event. But he listened intently as she explained the organization she worked for, a local non-profit working to combat sexual assault in the area. He expressed support of her efforts and together we posed for a picture with her sign. 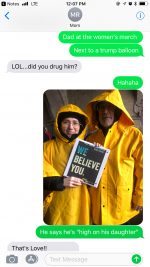 Then, I noticed someone was holding a cartoon-like balloon of Trump, asking my dad to stand in front of it for a photo opp. He smiled and laughed. This thing unfolding in front of us was beyond both of us, but at least we were having fun with it.

As the crowd began to ready itself for a march throughout the rainy city, my dad asserted his opinion. “Let’s go! No smart woman would march in the pouring rain,” he said. I bit my tongue at the statement, reminding myself that he did not mean any harm.

Later, in the car, we discussed the experience peacefully. “I believe in parts of the Women’s March, but not all of it. I think it’s more complex than you and me,” he said. Just for once we were in agreement about something political. In that moment, I realized something deeper—although I may not agree with my dad’s politics, I have his full support and that is enough for me. And in some strange way, going to the march with my dad had softened my initial ambivalence towards attending, and pushed me to experience it in a new, wildly unexpected way. 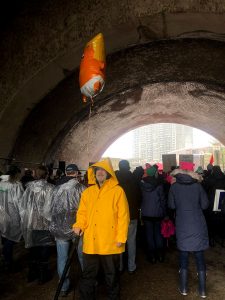 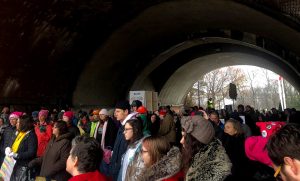 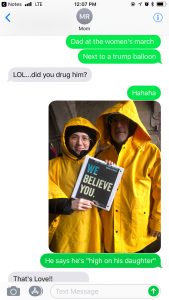