A time of emotional and visual discovery, Document looks back on the best of Milan menswear.

An ode to graphic novels, Miuccia Prada transitioned from her political past to an exploration of human stories, sending out jumpsuits—blocky, sleeves rolled up, entirely utilitarian—comic book prints, and graphic knee-touching socks for Prada Spring/Summer 2018. Stately, and perhaps not entirely summer, herringbone coats were paired up with short shorts and studded belts. A standout was the trio of suits—pale red, olive, and coral—each with a stripe running down the inseam.

With its Spring 2018 men’s collection, Fendi returned to the 1950s, reaching to both the casual and the corporate—executive, yet suppressed. Pale, pastel pinks offset the more serious toned beige, blue, and sand colored suiting; a sleeveless sweater over top a crisp shirt and trousers, see-through jackets and shirts belie the masculine executive, as Silvia Venturini Fendi subverted and critiqued universal corporate life.

With the oeuvre feeling ubiquitous to Giorgio Armani shows, the eponymous Spring line began stonewashed and relaxed, led by casual monochromatic tailoring and two-toned knits. A wonderfully genteel trenchcoat marked the introduction of color, leading to deep hues of magenta and sapphire, as outerwear—including a bomber jacket of scaled emerald—took center stage. Shoes of solid white and solid black caught the eye while piazza-ready suits of pure ivory marched stoically underneath “Made in Armani”—projected decisively onto the backdrop of the show.

Logo-mania and Californian sun never seemed so perfect. MSGM brought the luminous Venice Beach skater to Milan, as each paraded in vibrant Baja sweaters and short shorts, floral prints galore, and beatnik-esque sweaters down the brand’s Spring 2018 runway. To start, a declaration of self—loud and clear—as monochromatic looks completely awash in the brands logos were flaunted. Next up—with a modicum of subtlety—was camouflage-like floral prints, mixed with neo-workwear, and precise, technical outerwear.

A sense of ease and comfort, surf and sea. Guillaume Meilland’s Spring collection for Salvatore Ferragamo was replete with sun-tanned nonchalance in which he paired his lightweight shirt fabrics with a soft toned palette of pale lilac, powdery blue, and burnt yellow. Aquatic life—seahorse and coral motifs—appeared throughout. Grounding the collection though, was the appearance of corduroy pants, along with thick, fisherman-inspired knits.

“Nonchalance” was printed on a earthen hued sweater as Alessandro Dell’Acqua offered his take on the carefree, escape to the sea and surf trend that seemed ubiquitous this season for No. 21. The designer put together a less sun infused mix of surf and floral patterns though, creating a collection of soft tones and neutral colors. Military inspired suits and the sharp pastel colored, rain-ready outerwear added to the more pared back take on escapism.

Mr. Giorgio Armani looked to the east, focusing heavily on utilitarian and stark Japanese imagery for Emporio Armani’s Spring/Summer 2018 collection in which ankle-length culottes and martial art inspired outerwear were the stars. Paired with the classic tailoring that is to be expected at Armani’s shows, abstract calligraphy adorned sensuous silk blazers and jackets. 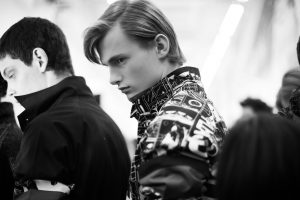 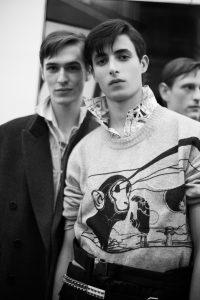 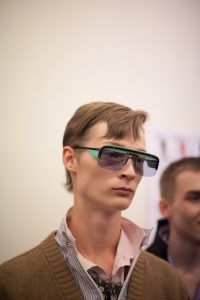 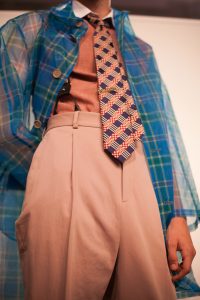 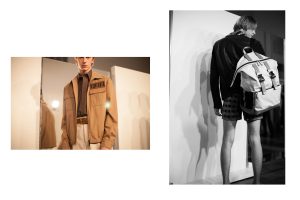 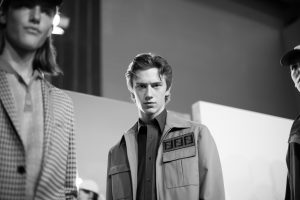 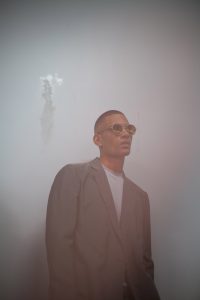 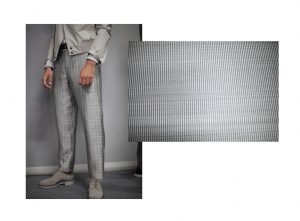 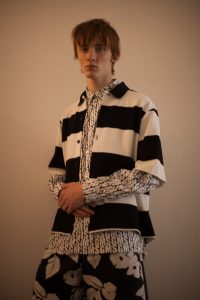 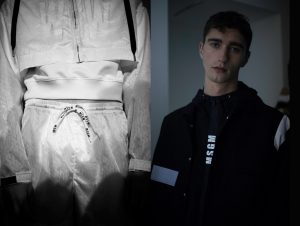 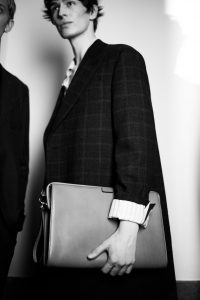 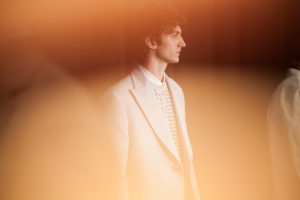 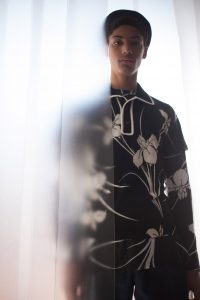 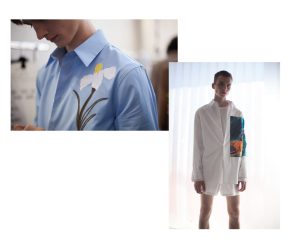 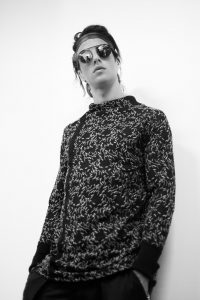 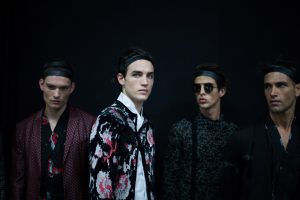