The Pirelli Tire building by Marcel Breuer, a forgotten icon of brutalist architecture in Connecticut, has been renewed as the stage of “Tom Burr/New Haven,” a liminal exhibition by the conceptual artist. Capturing the illusory and bygone space in the gallery above, photographer Daniel Swindel visited Burr’s exhibit (alternately titled “BODY/BUILDING”) for Document for an intimate preview of its first phase, “Pre-Existing Conditions.”

Known for his ongoing series “Bulletin Boards,” in which the artist works with and collages photographs of various disparate subjects, Burr provides a rejoinder to one of his most popular bulletin boards, “Brutalist,” in this new work. For the 2001 original, he grouped together raw sensuality through photos of the singer Jim Morrison with the jarring, Brutalist architecture of the Knights of Columbus Building, drawing an anthropomorphic—near erotic—perspective of the structure. His method of humanizing and drawing parallels between the inanimate and the somatic come to the fore now with the bandaging of the space’s wall where its formerly attached warehouse was “amputated” to make room for a new parking lot when Breuer’s building was purchased by IKEA in the early 2000s. Populating the departed space are the specters of workers past—their uniforms in discussion with each other as they hang from the solitary racks.

Adaptation and response to the city’s strict building code was a major aspect of the exhibition’s process: “I wanted to deal with the building as an event,” Burr says, “not simply as a structure but as a temporal condition. I dealt—out of necessity—with the building’s state of neglect and dilapidation.” Through the cordoning off of “unsafe” floor tiles, to the need to wall away an exposed elevator and electric panel, Burr lets the necessity of the building code guide the form of the space. Required railings are inscribed in full with the fiery and unceasingly poignant “May Day” speech written by French writer Jean Genet and read in English at Yale University in 1970. “I chose to consider the space and the place as a stage, and to introduce characters onto that stage,” he says. Genet—who also appears in portrait work elsewhere in the exhibition—writes about the unjust imprisonment of founding Black Panther member Bobby Seale and the hidden, insidious effects of white, liberal apathy. With the conceptual and immersive transformation of the once derelict space, the artist seeks to bring about a return to the modernist dream for which the iconic building once symbolized.

“Tom Burr/New Haven” is on view now by private appointment, and will continually be updated and adapted for the next six months at 450 Sargent Dr, New Haven, CT 06511. 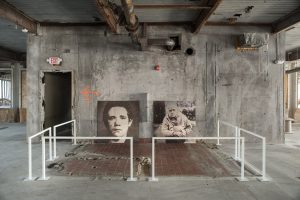 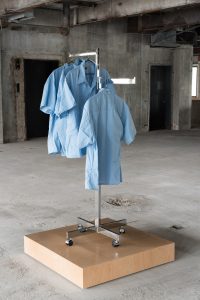 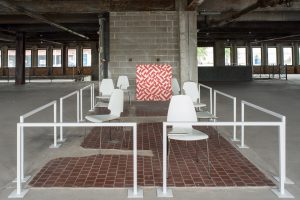 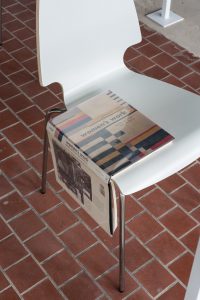 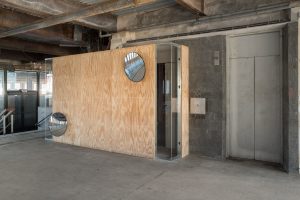 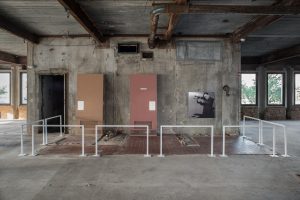 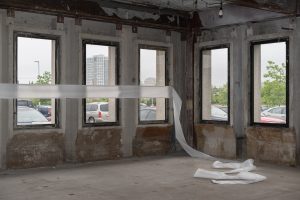 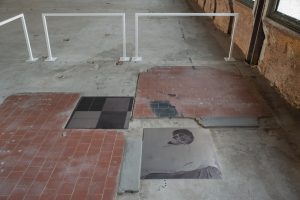