Delivering a poignant line that mixes traditional Arab garments and the designer’s personal love for sportswear, Marine Serre showcases an attention to color, detail, and experimental silhouettes. Born out of her work for Maison Margiela and Raf Simons at Dior, she has developed her collections as forms of self-expression and observation—channeling the need to stand out while too redirecting convention. In advance of the announcement of the 2017 LVMH Prize, Document speaks with Serre, one of this year’s eight finalists that are changing the way we think of and view fashion.

Document—How do you interpret beauty?

Marine Serre—It’s about a certain equilibrium between differents. The fabrics or colors that I use have different references and chains around them and are from very different times and places. Putting them together wakes them up onto one another. Beauty never works alone, it always works in confrontation—as activation. My work is always about trying to merge different paths together, creating a conversation between different styles.

Being a designer for me feels somewhat like a connector, and it is really strange to imagine fashion as somehow isolated from the rest of the world.

Document—Are there certain moments of your past that have defined you as an artist today?

Marine—As a designer, I feel like a sponge—it is really impossible to single out a particular moment. I studied for over seven years, I looked around at many different houses, learning from looking and trying to grasp things and follow them to the end. Other influences just as important [to me] are my historian boyfriend from Amsterdam, my family, my many weird friends, my travels—especially through the Balkans—and my sporty background.

Document—Do you think fashion should be political?

Marine—When it is about garments, no. Not in any explicit sense. This pressing need to give support to one or the other nowadays often irritates me. A garment works like language, perhaps, but then a language also works like garment, and they are certainly not the same. My work is not about giving or supporting an already articulated political message, and my collection does not support any already defined political program. That said, however, being a designer for me feels somewhat like a connector, and it is really strange to imagine fashion as somehow isolated from the rest of the world. 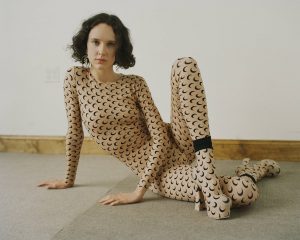 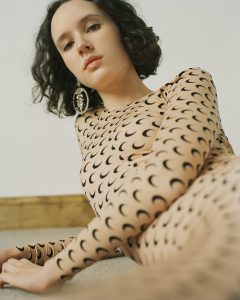