Syria-born, 3-D printing enthusiast Nabil Nayal draws a fine line between historical craft and modern innovation. With supporters such as Rihanna and Florence Welch, the designer returns to the competition for a second time following his 2015 shortlisting. In advance of the announcement of the 2017 LVMH Prize, Document speaks with Nayal, one of this year’s eight finalists that are changing the way we think of and view fashion.

Document—How did growing up in Syria inform you as an artist?

Nabil Nayal—Ever since I can remember I have been drawn to fabrics. My father ran a textile shop in Aleppo, where I was born. I used to accompany him to the store, which, for me, was a playground of creative possibilities. Customers would come in and unroll meters and meters of fabric, abstractly draping shapes and forms—using their own bodies as living mannequins. They would throw the fabric in the air to assess its qualities; their bodies transformed by endless creative possibilities. It was this confidence in asserting one’s own aesthetic in dramatic Syrian manner—cemented by my mum’s Western contradiction to traditional Syrian—that sparked some kind of moment in me as a young child.

In embracing new technologies, we can disrupt our thinking to arrive at unexpected creative potential.

Document—What led to your research and experimentation with 3-D printing? Do you see this as the future of fashion?

Nabil—I came about 3-D printing by accident. When I was studying at the Royal College of Art in London, the lifts would always break, so I used to have to walk up seven flights of stairs to get to my studio. If I got tired, I would stop and look through the windows over the park. One day, I saw students carefully carrying the most mesmerizingly pure-white objects into the Rapid Prototyping department. I followed them in and, three months later, my MA collection was shown depicting cobweb-like tulle draped over 3-D printed baroque. In embracing new technologies, we can disrupt our thinking to arrive at unexpected creative potential.

Document—What have you learned since your previous participation in the competition?

Nabil—Being part of the LVMH Prize is a tremendous experience. I was fortunate enough to be shortlisted in 2015. That gave me the opportunity to discuss my vision for my brand with so many talented individuals and led to moments that I shall always treasure—the most notable being when Karl Lagerfeld, upon seeing my work, exclaimed “I love it, I love it, I love it” and then proceeded to buy one of our shirt-dresses for Amanda Harlech. I was thrilled to be shortlisted once again this year, and it was great to be able to show the panel how we have grown and evolved following the advice we received [before]. 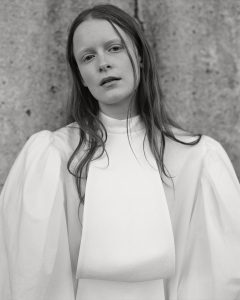