Knighted by Prince William, Duke of Cambridge, just this past week for his services to the field of design, Sir David Adjaye is one of the most important architects of our time. A role model for not only black architects—who are underrepresented in the industry—but the world at large, his work is conceived with the intention to effect positive change. Perhaps his most memorable milestone, the National Museum of African American History and Culture, opened earlier the year and has been heralded as a new type of building that reflects not merely an architect’s singular vision but the experience of an entire community. As he described in Document No. 9 in conversation with Smithsonian curator Lonnie G. Bunch III, the three-tiered, upwardly ascending institution not only completed Pierre Charles L’Enfant’s grand plan for the National Mall but also an understanding of America’s dark past. Now, Adjaye is extending his expertise to a new field of design: audio. Together with Master & Dynamic, the architect has crafted the MA770 Wireless Speaker, a sound system made of proprietary concrete that displays an expressive, lyrical silhouette. As with his design practice, Adjaye pushes the formal qualities of the speaker’s design to new limits by eliminating a traditional box frame and, instead, molding an organic curve that slopes from the base of the piece to a near-dematerialized peak. The shape realizes Adjaye’s investigation into the “geometry of sound,” elevating what would be an electronic device to the status of an art object. 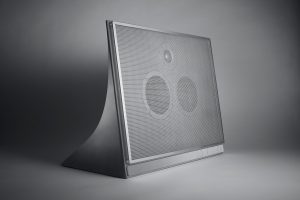