In a moment in history when the role of art and the responsibility of artists to take action has returned with urgency, the 57th Biennale di Venezia seems entirely escapist. The exhibition, “Viva Arte Viva,” directed by long-time chief curator of the Pompidou Center in Paris Christine Macel, puts art and its makers first—everything else starts from that point. With all the many parallel events and museums, a giant, golden public sculpture, and more than 85 national pavilions, Document joined designer Patrik Ervell to explore special moments from this, one of the world’s most significant contemporary art events.

To enter the first of nine so called transpavilions, “artists and books,” we must pass under a suspended drape painting, “Yves Klein Blue” by 83-year-old African-American pioneer artist Sam Gilliam. The authority of the all-white columned building is undermined by the richly saturated blue, yellow, and red soaked raw canvas that hangs like a protest banner. Gilliam is a painter’s painter, a window into Christine Macel’s “for artists by artists” curatorial approach. Coming from color field painting as a signifier of personal freedom, he maintains visual and material decisions, and his work complicates the philosophical (transcendental) aspirations of American abstract expressionist painting. This liminal space of the portico transitions us from outside to inside, shining with vibrant primary colors.

The first piece we encountered was a series of black and white photos by the mostly unknown Mladen Stilinović of himself sleeping, titled “Artist at Work.” Perhaps, to give weight to her concepts, Macel calls upon the Roman terms “Otium,” which roughly means “taking time away” or “meditation.” It is also the title of a work by giant of postwar art Franz West, known for working while “chatting to friends or napping on the divan.” Other artists on view are hard at work lounging, like a self-portrait of Frances Stark on the couch (a psychoanalytic pun, as she is surrounded by inspirations and images of her boyfriend).

Dawn Kasper “The Sun, The Moon, and The Stars.” Photograph courtesy of La Biennale di Venezia.

Past the wall of slumber, we immediately hear Neil Young’s “Heart of Gold” on the record player in the next room. We arrive in a rotunda under a stunning vaulted frescoed ceiling to Dawn Kasper’s “Nomadic Studio Practice Experiment.” She has moved her materials and equipment—including a full set of drums, a record player, guitars, paint, and a flatscreen TV to play Buster Keaton films—to Venice for six months where she will work inside the exhibition. “Music is a way to get to people emotionally,” she says, explaining that her being present is a performance. “I’m freaking out for you or in front of you, but I don’t want to freak out on you. I don’t want it to be shock art.” Perhaps the two most beautiful bodies of work in the exhibit are both centered around books, which, while not nostalgic, proves that publications matter more than ever. First are the ink-soaked volumes by Geng Jianyi laid out in a vitrine, and the careful but incredibly suite of small oil paintings titled “books on books” by Beijing-based Liu Ye. As much as they call on a history of realism, the paintings are inspired simultaneously by cartoons (Muffy, for example) and the neoplasticism of Piet Mondrian.

“The Pavilion of Joys and Fears,” is suddenly much more existential. A centerpiece inside is work by the late Syrian artist Marwan; he spent his lifetime obsessed with portraiture. Early paintings in the 1960’s were fairly straightforward naturalistic representation but over time he zoomed in closer to the sitter’s face making them more grotesque and abject until the last paintings are nearly abstract—turning the visage inside out. Beside Marwan is art world stalwart Kiki Smith, who nearly owns abjection as a mode of working, and brings this to a new body of work inspired by dark fairy tales.

Nearby is Chicago-based McArthur Binion, another African-American abstract painter, who by not making the political immediately visible, reveals what can not be seen. Taking the documents of social contracts—his own birth certificate, licenses, and other legal papers big and small—he subjects them to shredding and places them inside cross-hatching along a post-modern grid, his signature style. One of the fair’s youngest artists, Rachel Rose presents a new stop motion cartoon, “Lake Valley,” that illustrates a 19th-century children’s book. The main characters are a girl that levitates out of her bed while sleeping (or is a dream?) and a hybrid rabbit/dog/fox—a border-crossing species of what Donna Haraway would call a “messmate.” The only female African-American artist in the exhibition, post-minimalist Senga Nengudi presents her “RSVP” sculptures (begun in 1975), working with nylon stockings that not only recall the body but require movement and performance to activate them.

Over at the Arsenale, we run smack into the great Lee Mingwei, a relational aesthetics artist from Taiwan, who expanded the discourse outside of Europe—and often in a far more poetic and queer way. He remounted his “Mending Project,” in which viewers are invited to bring their torn or battered clothes to him. After giving their names and occupations, he sews up the clothes (healing the wounds) with colored thread. Charles Atlas, a Document contributor presented one of his large-screen video works “The Tyranny of Consciousness,” which displays a collage of sunsets. The voice over the image is New York night-life luminary Lady Bunny, who talks about the downfall of American politics to an electronic dance beat.

Elsewhere around the biennial there are artists asking the question “How can we reinvent a new humanism after its failure?” Another New York artist Sam Lewitt, who here deals conceptually with the historic electric company of Venice in a work titled “Stranded Assets,” addresses notions of institutional critique. Taking historical lamps that were shaped uncannily like open books, Lewitt smartly produces their ghosts out of coal ash.

In the “Pavilion of the Dionysian”—dedicated to the ecstatic states of the feminine—Ervell finds his favorite work here, ironically, the only male artist in this section. In a combination of new and old works by Berlin-based Canadian artist Jeremy Shaw. He is literally a rock star and artist—his solo music production is aptly titled “Circlesquare.” It is an image of two opposing shapes that fit perfectly together as art and music. His last album, “Songs About Dancing and Drugs,” is kind of a leitmotif of recent work. We stop to see his “Towards Universal Pattern Recognition” series, mostly black and white found photos covered by transparent prismatic formations that transform the photos into a sculptural wall reliefs. One photo is a person screaming that recalls Edvard Munch in subject and even more so Francis Bacon in its formal elements. His new video, “Liminals,” is a science fiction piece that follows a group of people engaged in trance-like states to save humanity. A very David Attenborough authoritative voiceover tells us that ”in extreme periods of political change we enter a period of great uncertainty and disorientation that brings about a potential of important new perspectives.” The voice continues: “Although there is no exact date, our extinction is a quantifiable certainty.”

Out of all 85 pavilions, everyone was talking about the German space the most. We waited along with museum directors, curators, and billionaire heiresses more than one hour to get in. Some people said they waited much longer. Once inside, we were immersed into a gesamtkunstwerk of the world of artist Anne Imhof. Bringing together painting, drawing, sculpture, installation, architecture, and dogs in cages for a five hour-long performance, it won the Venice Biennale’s Golden Lion. Imhof disrupts established orders, boundaries, and barriers by subverting idealized representations—especially from fashion—into bodily desublimation of the abject and spiritual. She works with a core of performers who are all friends, including her lover Eliza Douglas, whose Ars Nova-style Gregorian chanting almost moved us to tears in the premiere of “Faust,” produced just for the Biennale. One association comes quickly to mind, the aesthetics of HealthGoth: bodies that are augmented by biotechnology, neoprene and sweat-resistant sportswear nearly all black, like Nike, Adidas, Hood by Air, Rick Owens, mixed with band T-shirts, and embracing the reality of current dystopia. Not without irony, Imhof herself wore Balenciaga during the performance. The bodies of the performers became hybrid (zombified) cyborgs, collapsing the self and other in the dissecting gaze behind glass walls. In the end it is the music that redeems us, composed in part by collaborator Billy Bultheel, in a moment his smears ignitable petroleum jelly on the floor in the shape of a serpent and lights it on fire. His hand in the jar of lubricant evokes “fisting” and in fact faust means “fist” in German, a symbol of solidarity knowing when to raise your fist to fight for what is right.

The last thing we see with Ervell before the tour ends is as magical and mythical as the floating city itself—“the golden tower” by the late, legendary shamanist artist James Lee Byars. It is a colossal, 20-meter tall that, in his words “bridge heaven and earth, and unify humanity,” a deeply spiritual work of the sublime. In every sense of the idea, this phallic symbol has been erected at the edge of the grand canal. He intended it to be a monument to humanity in one of his hometowns of Venice, which is of one of the earliest cities of globalization where west meets east—nothing could be more fitting than this shiny golden beacon of optimism. 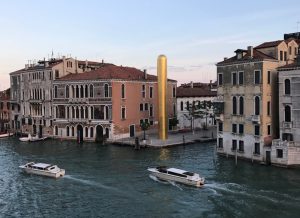 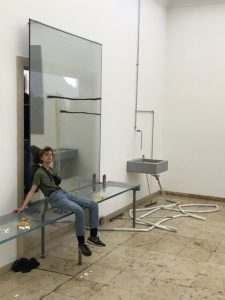 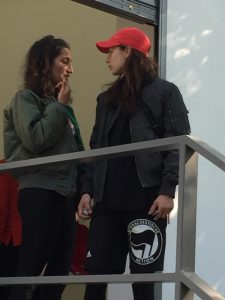 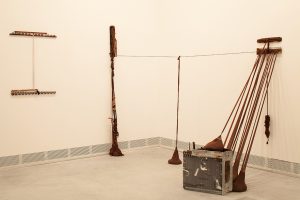 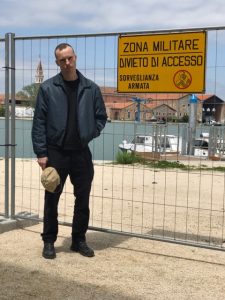 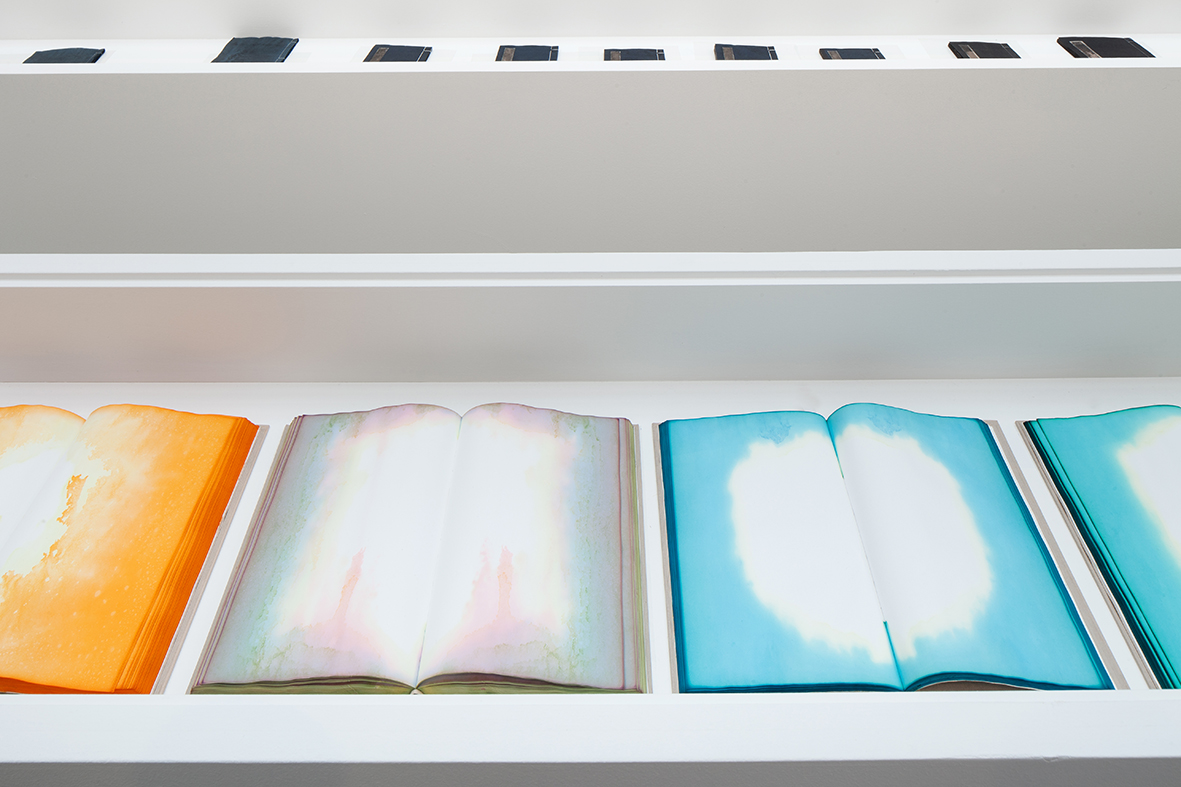 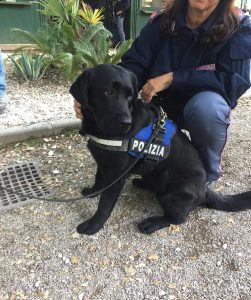