An exclusive preview from Document No. 10, the magazine’s upcoming five year anniversary issue, we unveil a special portfolio by Jesse Mockrin in collaboration with Night Gallery and Korean boy band EXO on exhibition at Galerie Perrotin Seoul now.

In uncertain times as these, indulging in beauty and fantasy can seem decadent and even frivolous, but our ability to dream begets passion. And passion—particularly the youthful, unbridled kind we hold for our heroes—has always provided the thrust for countercultural movements and political rebellions. The painter Jesse Mockrin finds strains of progressive politics and transgressive aesthetics in the illusory, spectacular fantasy world of pop star idolatry and luxury fashion, questioning how gender codes are prescribed, performed, and disrupted in popular culture. Mockrin finds a fitting fashion counterpart in Alessandro Michele, the creative mastermind behind Gucci’s recent reinvigoration. Indeed, the singular visions of the artist and designer prove a beautiful match in this series. Nodding to portraiture tradition dating back to the Renaissance and to celebrity merch pins, the suite of tondo paintings depict the K-Pop superstars EXO, the nine-member juggernaut considered to be the biggest boy band in the world, wearing Gucci’s Spring/Summer 2017 collection.

Long interested in the tension between artifice and substance and gender fluidity in cultural spheres high and low, Mockrin has drawn broadly on references from the effete, romantic aesthetics of 18th-century Rococo portraiture to contemporary Korean boy bands for their fine features and lissome shapes. Here the artist takes on the music group that has set hearts aflutter across Asia while co-opting the stereotype of the Asian male as effeminate and challenging prescribed gendered standards for attractiveness. Just as dandies have employed wit and seeming frivolity to challenge heteronormative, bourgeois values, there lies far more substance beneath the lushly rendered surface of these paintings.

View Slideshow
Tags
Above the FoldArtExoJesse MockrinK-Pop
Tweet this quote 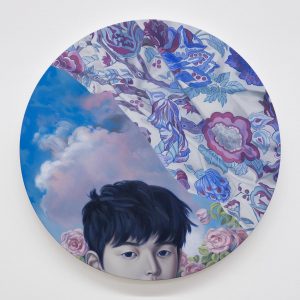 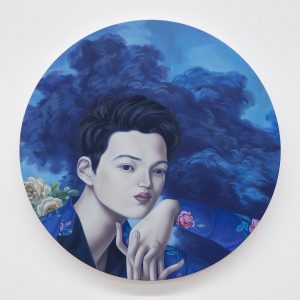 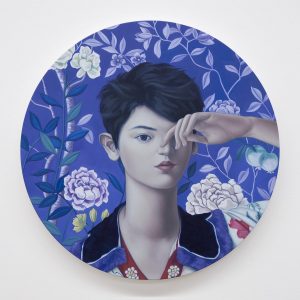 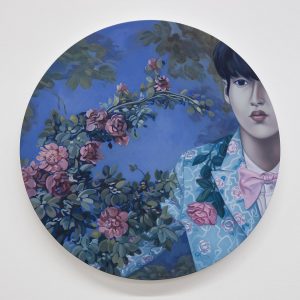