The Italian artist Nico Vascellari is one of few living artists whose multidisciplinary practice crosses such a plethora of nonsensical disciplines that it can only be understood through its own sense of synthesized chaos. Through collage and sculpture to neo-pagan séance and thrashing, electrified jungle percussion, his deeply immersive universe is one peppered with references from the dark underbelly of European history combined with a compulsive fanaticism for 20th century death metal music, gore culture, and the occasional brush with fashion or the occult. Based in Vittorio Veneto, a sleepy town in the north of Italy, the 40-year-old artist has led a double life traversing the art and music worlds for over a decade, the latter via his collective performance studio Codalunga—itself a cult entity in the region, known to draw subversive musical acts from across the globe—and his group Ninos du Brasil, whose maniacal on-stage performances combine costumed theatrics with thumping drum and bass improvisation. His art career has existed in a separate bubble; whilst far from the post-Internet generation, his work combines the digital, industrial and natural worlds in a symbiotic exploration of our contemporary human condition.

Like modern day relics, Vascellari’s recent sculptures (shown, notably, at the Estorick Collection in London, Manchester’s Whitworth Gallery, and the Villa Medici in Rome) are cast in bronze from plants and the found carcasses of birds and small mammals, their lifeless forms immortalized in metal, at times buried amongst a nascent cocoon of wiry filaments extending from the casting process. From tree bark and thorn branches to owls, pigeons, and foxes, many of them set the scene for the artist’s latest work “Scholomance,” an evolving in-situ performance and installation piece that began at the Palais de Tokyo in Paris last Thursday and will continue in Bologna this May, bringing together an unexpected cast of collaborators from auxiliary worlds as cohorts in Vascellari’s 21st century call for old world magic. Named after the mythical Transylvanian academy of dark magic that was purported to disappear and reappear in the darkest forests of Eastern Europe, “Scholomance” is a natural progression and collision of Vascellari’s worlds—a clash of sculpture, poetry, music, and an ephemeral, multi-sensory experience all housed within the museum context.

His collaborators for the first chapter are a motley crew: from underground musicians Carlos Casas, Mark Of The Devil, Ash/Nargaroth, and Ghédalia Tazartès, to Vascellari’s partner, jewelry designer Delfina Delettrez (who sculpted hundreds of crystal-strewn chalices to hold Valerie Chartrain and Franck Audoux’s home-brewed “forest” liquor) and Michèle Lamy, Rick Owens’s magi wife. Forming a call-and-repeat of improvised performance works, the artists’ welcomed a cast of thousands through Vascellari’s maze of metal for a trance-inducing evening of live music and prose.

Dan Thawley—Where did your idea come from for this sprawling, jointed metal sculpture through the Palais de Tokyo?

Nico Vascellari—It was inspired by the infamous homicide by Luka Magnotta, who was constantly seeking attention. He published videos of himself killing kittens and a Chinese student on BestGore.com. People first dismissed [them] as fake, then recognized the room that they took place in and traced it back to him. In the end, the reason I was intrigued by his story has nothing to do with the killer himself, but rather the fact that his act was a total exaggeration and extreme manifestation of Internet culture and self-referential documentation. It went further than social media, something that is affecting our entire society.

Dan—Was it about vanity and narcissism?

Nico—It is like creating a closed circle, an infinite loop between the camera and one’s self; like the Ouroboros snake swallowing its own tail, the beginning and the end of a person. As such, this translated into the basic structure of self-advertisement (being the billboard), where I placed bronze sculptures of palm leaves, referencing the “Casablanca” film poster that was in the background of Luka’s original video. To me, it was a subtle detail linked to the crime. There were two surveillance cameras on the sculpture, one that was filming the sculpture and projecting it back onto itself. It was called “True Faith,” after the New Order track that was playing in Luka’s video.

Dan—How did that idea evolve into the “Scholomance” piece?

Nico—It is like a liquid forest that can adapt and grow within different spaces. After [Palais de Tokyo], it will move to Bologna during Live Art Week this April, an entirely different environment and architecture. [In Roman mythology], Scholomance was a school where you were taught about the mystery of nature and the language of animals. The teacher was the Devil himself; however, that idea is not so central to my work. Rather, the content is related to the people who I invite to perform alongside me and the ways that they deal with the natural world. They are sharing their knowledge with the audience, not in a scholastic way, but to present their work for people to take what they want from it. Everything is recorded: the actions and happenings and sounds that they produce, even the way the audience respond to the installation—this becomes a part of the installation later on. When people enter the show in Bologna, they will be confronted with the video and sound from Paris. And that will continue to be layered on top of each other as time goes on—again linking to nature, almost like fossils. I call them “fossils of experience.” I believe people are built the same way, and that many things that we do come from things that are buried inside ourselves that we don’t even remember, like a part of our spiritual DNA. I’m interested in the fact that all of the performances will remain a part of the piece moving forward, as though they were like a strata of leaves on the forest floor. I don’t want to show literal videos of each of these artists, I want it to be an echo, a shadow. Not a ghost but like an aura. I want to explore the idea that nothing lives forever, nothing dies, but instead everything just changes form.

Dan—How will you produce this shadow video effect?

Nico—At Palais de Tokyo, there were simultaneous projections that were scattered throughout the space so that, for example, Ghédalia Tazartès was chanting in one corner, but visitors could watch that projected somewhere else in the space, too. The show was conceived as a sort of chorus, with a cycle of actions happening at the same time so that you are coerced to move around and get lost to discover all the different elements. As the performances are projected onto the sculpture, they became ambient projections to stimulate a feeling rather than an implicit representation.

Dan—Do the performers interact with the “Scholomance” structure?

Nico—Paris was the first chapter, so my goal was to reach for the most primordial experience possible. The people I invited to be involved in the show work primarily with sound, because I think that when humans came into being, sound was one of the ways that we began to experience and understand ourselves. I was trying to understand how to translate very primal human experiences into the piece, which is also why I didn’t unveil too much about the sculpture to the other artists beforehand. This way the structure for the first show was more about being a backdrop and an environment within which the performers went their own way, rather than dictating any direct interaction. This will change in the coming shows. But for the beginning I wanted a sort of chaos for the artists to discover, too.

Dan—Did each artist improvise his or her piece entirely?

Nico—Performance is not representation for me but an experience, and the performer is the first one who has to live it. I gave each artist some rules to follow, but mostly in regard to timing. I am not trying to direct anyone too much. [The artists] are chosen because I believe in their coherence with the project and I respect their work. It has always been like that for my performances: there are certain rules, but I always think about the beginning, the middle, and the end as the elements of timing. The free moments that happen in between are what count. That is why I won’t do the same performance twice. Michèle Lamy is the only artist who read a text written by myself and my grandfather, mixed with citations from Werner Herzog and Ian Dominick Fernow (AKA Prurient).

Dan—How did you choose each collaborator for this show?

Nico—There is a different story for each of them. Nargaroth, for example, is a musician that I had never met before, we had only [been in] contact via email, but his music kept coming back to me as I was working on the piece. The more I understood about him—the way he lived his life—the more it made sense for him to be involved. I had worked a lot with Ghédalia Tazartès in the past, and he has taught me how to use the voice as a connection to different realities—the balance of an internal and external entity that remains a very mysterious thing for me. For this project I have tried to write down feelings and experiences and fantasies about the beginnings of the human race to try. Although some of these artists are very close to me and some are not, they all come from very different environments and that is crucial to be able to gather an atypical audience for the performance itself.

Dan—Is it difficult to find a place where your art practice and music can coexist?

Nico—Moving from the music industry into the art world, it became clear to me that both sides have their own rules and limitations, but also their own richness. The people from the music scene came to see my first art performances, and would look at [them] and think “This is art bullshit.” The people coming from the art world were simplifying the performance and classifying it as a concert. I was interested in the fact that each was somehow seeing aspects of the work that did not belong to their own language. That feeling is something that I have always felt is very important to recreate. It puts me in a position of being constantly unsatisfied, and therefore pushing the work further with each show. It is very frustrating but very vital. 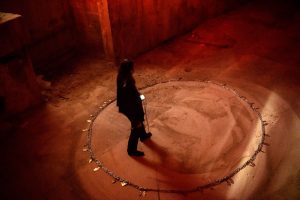 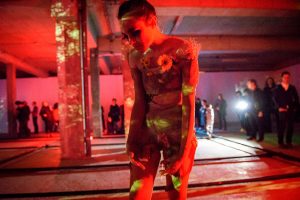 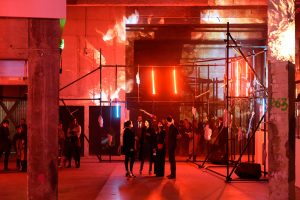 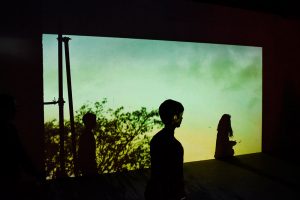 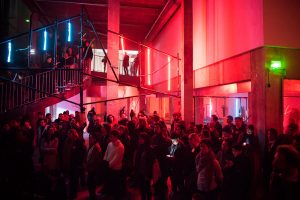