British sculptor Nick Hornby returns to New York with “The Curators’ Eggs” at Paul Kasmin’s summer exhibition. Having recently installed the prestigious commission of the Glyndebourne Opera House in the U.K., the artist speaks with art adviser Thomas Rom for Document about his new work and art history.

Thomas Rom—We met in Miami in 2011. I remember being struck by how mature your sculptural language was for a recent graduate: pristine white abstract forms cast in synthetic marble.

Thomas—The passage of time, time itself and the notion of the “contemporary” seem to be very important to you?

Nick—Yes, if we judge art according to its context, then when is as important as what. Our cultural heroes are the inventors and the trailblazers—Picasso and Matisse for example.

Thomas—So if Matisse did his cut-outs last year they wouldn’t be so important now?

Nick—Actually, I think the cut-outs would stand up very well as new work today. But it is a difficult thesis to test.

Thomas—That leads us neatly into the exhibition at Paul Kasmin Gallery. Co-curating the show allowed me to spend some time with you discussing several pieces in different scales and materials. It was fascinating to have this dialogue with a sculptor at the early stages of a project, before size and materials are decided. Why don’t we start with the concept.

Nick—It was a great opportunity to work with you and the gallery to realize an ambitious piece, and see how it functions in the context of this exhibition, which includes multiple voices. The concept comes from a story about the beginning of Modernism 100 years ago, when Picasso visited Matisse for tea. Matisse had been collecting African masks and antiquity when Picasso found a Fang mask hanging on a wall and instantly fell in love with it. He was transfixed. Matisse let him take it home and two weeks later—inspired by this mask—Picasso painted “Les Demoiselles d’Avignon” (1907), thus inventing cubism and changing the course of visual art forever. This isn’t entirely historically accurate—but gives you an idea. In my practice I spend a lot of time with cut-out shapes because I believe silhouettes inhabit a halfway house between picture and code. I was spending some time looking at Matisse’s cut-outs—an end point of European modern art—and discovered that if you extrude Matisse’s “Acrobat” (1951) and intersect it upon itself at an oblique angle, the resultant object looks remarkably like a mask.

Thomas—It’s an uncanny object—from the front it looks like a mask, but as you walk around it it’s very strange to see the outline of the Matisse “snap” into view from the side. How is it actually made?

Nick—It is a Boolean operation performed in a computer and then digitally cut using robotic tools. I worked with the Walla Walla Foundry in Washington State, who produce elaborate and complex sculptures by Jeff Koons, Paul McCarthy, Urs Fischer, etc. I didn’t invent this shape—it is a manipulation of the Matisse that is faithfully represented.

Thomas—Is it “another version” of Matisse?

Nick—The sculpture is intended to problematize questions of authorship: What is an “original?” And what is a “copy?” For the mask it depends on where you are standing and the angle in which you view it—from the front you see a mask, from the side you see the Matisse cut-outs. In the U.K. I have recently installed a variation of this piece in which I added an image on the surface—an enlarged detail from a late Picasso portrait—it’s bright and yellow and completely wild. This additional layer gives the viewer clues to my intentions, reinforcing the narrative, but also creating quasi camouflage to obfuscate authorship, and it emphasises on the “front” view. In a lush green garden the piece is like an exotic flower against the traditional English Garden.

Thomas—So one is a colorful wild sculpture out in the garden, and the other is wooden sculpture in a polished gallery space?

If we judge art according to its context, then when is as important as what.

Thomas—Another major project you have this year is your exhibition at Glyndebourne Opera in the U.K., which is a prestigious commission. Previous artists have included Tony Cragg, Anish Kapoor, and Antony Gormley, and this year you sit alongside Rachel Kneebone at White Cube who has a pop-up gallery next to the opera house. You’ve assembled a significant number of works—ten sculptures, including some monumental pieces—which is your most complex installation to date. What was that like, installing in that landscape?

Nick—Glyndebourne is a magical place—full of so many narratives. The opera festival came about because a hundred years ago the heir to the estate fell in love with an opera singer and effectively built the opera house for her. Today, the landscape comprises formal gardens as well as rugged fields. These spaces evoke two quite contrasting styles of sculpture: figurative statues standing on pedestals in ornamental designed gardens and Henry Moore-esque bronzes sited directly on the landscape in the rolling hills.

Thomas—Yes, it’s as if Glyndebourne itself begs to include both historic and modern sculpture. You took the opportunity to work with numerous materials and processes—marble, steel, corten, bronze, epoxy resin, and digital fabrication.

Nick—I installed ten pieces, several were quite large—weighing up to 700 kg. The marble pieces were fabricated with Studio SEM, who are based in the hills of Carrara, Italy, from which the marble for “David” was quarried. The steel and corten pieces came from northern England. I worked with my London foundry on a new method of direct burn-out. Many different steps and processes are needed: analogue and digital, traditional skills, and new experimental techniques.

Thomas—The show is titled “Sculpture, 1504-2017.” Can you tell me a little more about why you chose those dates?

Nick—Yes, 1504 is when Michelangelo made “David”—the famous Renaissance marble statue.  The pieces at Glyndebourne reference this and other canonical artworks. Situated by the lake, “God Bird Drone” extrudes the outline of “David;” at over 12 feet, the sculpture converges at a single point. The silhouette of the canonical and classical body lies horizontal, flush with the ground, visible only from above—by birds, gods, and drones. The figurative perfection of this sculpture is juxtaposed against Platonic ideals of geometry, with the body repositioned in the contemporary moment; where the technologies of satellites and drones bring new viewpoints to these relationships. According to art history, single point perspective was invented in Florence around the same era as “David,” as if everything was converging to this single point in time. But, of course, this “grand narrative” is a fairy tale—a reductive narrative from a Eurocentric male perspective.

Thomas—When you say fairytale, you’re talking about the myth of genius—how history tends to single out individuals and place disproportionate weight on their significance? Because despite your critique of this canon, you clearly have a genuine and rather geeky love of art history,  which seems to be a contradiction?

Nick—Yes you’re right. We’ve made great progress by toppling these “men on horses” and patriarchal dynasties; but at the same time I would have to admit that I genuinely do think Picasso was a genius and I love his work. I struggle with this contradiction.

Thomas—I agree that cultural history has a tendency to be overly simplified. What’s next?

Nick—I have a lot going on—a V.R. project with a V.R. theatre company called Breaking Forth, a residency in Tel Aviv, and an installation at Ceruti’s new flagship store in Paris. I’m currently researching some new stories. [Laughing.] Some of them are “old” stories from the canon of art history! 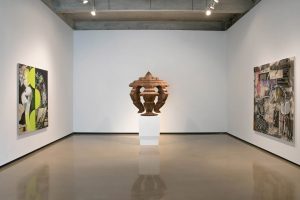 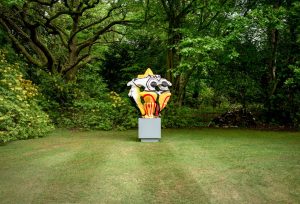 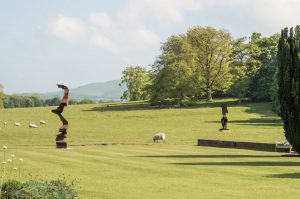 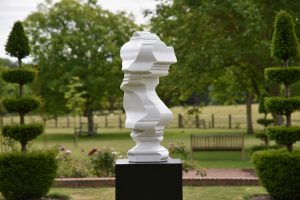 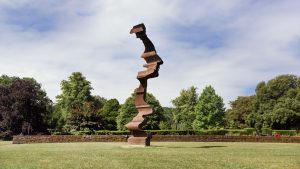