From a youth spent in 1990s Tokyo, music subcultures and Japanese streetwear runs through Kozaburo Akasaka. Through meticulous technique—each individual stud on the designer’s berets are given patinas by hand—he infuses his contemporary designs with a near-couture sense of fabric and craft. In advance of the announcement of the 2017 LVMH Prize, Document speaks with the Akasaka, one of this year’s eight finalists that are changing the way we think of and view fashion.

Document—When did you first notice an interest in fashion?

Kozaburo Akasaka—The way I was brought up in Japan has contributed to the ways I approach my work. My mother taught me the concept of mottainai, or “waste nothing.” It is about respect and mindfulness for every material—a notion that was passed down from old Japan. My older brother also influenced my interest in music. There were so many alternative music scenes in the 1990s. I became interested in how these musicians dressed and acted on stage. It was a true revelation for me from which I found beauty and excitement.

My work is about finding that harmony [and] working with people.

Document—What is the basis of your creative process?

Kozaburo—It’s the harmony of the imperfection. My work is about finding that harmony [and] working with people. Collaborations with friends in recent year have changed how I [create]. Today, I find it to be a positive action.

Document—How have you enjoyed the LVMH Prize experience so far?

Kozaburo—Being a finalist is one of the most honorable moments and has been the greatest opportunity so far for my career. I’ve learned so much from the advice and stories that I’ve received from the panel. 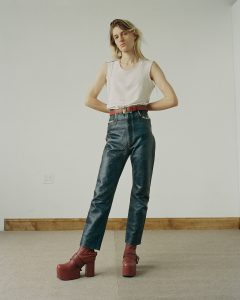