Infusing her light, ethereal fabrics with a femininity for the real-time, Molly Goddard is driven by nostalgia and the wistfulness of our formative years. Winner of the prestigious Emerging Talent award at the 2016 Fashion Awards, her collections are centered around brightly-colored tulle smock dresses and tutus. In advance of the announcement of the 2017 LVMH Prize, Document speaks with the designer, one of this year’s eight finalists that are changing the way we think of and view fashion.

Document—What is beauty to you?

Molly Goddard—I don’t think I could ever define beauty in one answer, I find too many things beautiful. Often the ugliest things are most beautiful to me, and my viewpoint changes so often it’s impossible to define. I would say combinations are what I find most beautiful and interesting though, fabrics in certain colours, textures at certain times of the year—again it changes too often!

Document—You often reference your upbringing. How has this shaped you as a designer?

Molly—I think what I wore as a child and as a teenager has influenced me, not so much in the way I create but what I am interested in and inspired by. Always being on a budget has been one of the biggest influences for the way we create in the studio; it’s often a case of making something very simple transform into something precious, simply by technique and time.

I don’t think I could ever define beauty in one answer, I find too many things beautiful.

Document—How have you grown as a designer throughout the whole LVMH Prize process?

Molly—It has already been an amazing learning curve. Meeting so many people has taught me so much and made me really think about what I do, what I want to achieve and why. I still have a massive amount to learn and having support from designers as well as business advisors would be incredible; it’s not often you get to speak to established designers and understand how they work and get their opinion on your work. 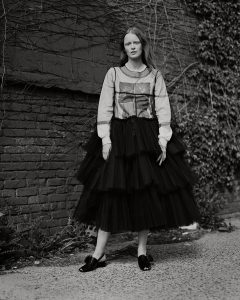 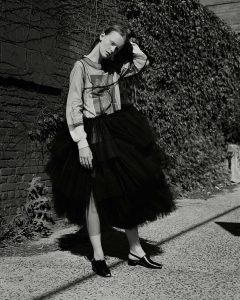