Like much else in the art world, Gallery Weekend Berlin is about faking it till you make it, keeping up appearances, and gatecrashing. As one gallerist humorously described it, it is the “summer camp of the art world.” Now in its 13th edition, the non-stop 72 hours of openings and parties has been so successful that similar weekend events have begun to pop up worldwide.  In Berlin, the concept is simple: make the city itself into a sprawling exhibition where galleries become little pavilions themselves to show their most important exhibitions of the year. The center of it is occurs in the official 47 selected spaces, each given a BMW car service to drop collectors off at their front doors and ten tickets to the massive, more than 1,000-person Gallery Weekend Dinner: There are rumors that it is harder to get one of those coveted 10 tickets than a personal invite to Gagosian’s own home in Amagansett.

Gentrification is in full swing in the city, in an interesting shift over the past years the galleries have left Mitte (old East Berlin), which is now home to luxury real estate, to come back west. On the Landwehr Canal you’ll find Isabella Bortolozzi. When it comes to scholarship, few gallerists compare to her outstanding program. She daringly mounted a fashion show-cum art exhibition in which the duo of designer Anthony Symonds and stylist Max Pearmain invited photographer and Document contributor Tyrone Lebon to create a campaign for the launch of their perfume, Iron Lady, named ironically after Margaret Thatcher. When asked what the relationship between art and fashion is, Symonds, the nerve-center of the exhibition, said, without skipping a beat: “Photography.”

During the Spring 2017 London Fashion Week, Symonds and Pearmain premiered their hand-cut haute couture collection in collaboration with gallery Cabinet, which served as the backbone of their show at Bortolozzi today. The clothing—with strange silhouettes recalling a hybrid of 1980’s Japanese design with 90s club culture (not to mention Leigh Bowery, Rick Owens, and John Galliano who Symonds once worked for) —transformed the gallery into a performative “retail baroque” critique of the fashion industry. As Ms. Bortolozzi put it, “the whole exhibition is one extended advertisement.” With Lebon, the artists casted porn star Stoya to star in the campaign accentuating the sexualized implication of perfume sales. In the photographs, the crystal bottle—with the diamond cut glass stopper and golden liquid perfume (taken directly from the design of the Chanel Number 5 bottle, which makes up 50% of scent, the other half is YSL Rive Gauche)—enlarges and distorts Stoya’s vagina. Since all three artists are men, it touches not only on sex but sexism, too. Sex indeed sells, however, one hesitates: Is the work misogynist? Is that its point? The central focus of the imagery was clearly the female genitals, rarely shown in ads, but always suggested. Does it recall the radical art historical painting by Courbet, “L’Origine du monde” (Origins of the world) or later Duchamp’s “Étant donnés” (The Given) and most recently Paul McCarthy WS? As a work art, the advertising campaign seemed to subvert the male gaze into an oppositional gaze, the feminine object became the agent of change. Symonds said affirmatively, “The distinction between art and fashion is artificial.” In the end it is still about a return to the real, which is a mystery of what Lacan called “the speaking body.” It confronts capitalism grip on fashion and libertates it into the aesthetic realm.

Nearby, on Kurfürstendamm, the art of Symonds, Pearmain, and Lebon transformed the way we saw the sex shops and hooker in bomber jackets and the shortest short shorts possible. This is how art can change the world by shaping the way it’s seen. There we found the most cutting-edge gallery in the city, Société, who showed the daring Lu Yang. Previously seen in the Chinese Pavilion in Venice, Yang, deals with subjects as varied as original sin, the nimbus, buddhas, and deep brain stimulation. The show for GWB was a sensation right from the entrance, when you encountered a massive balloon (the kind used on in the Macy’s Thanksgiving parade) of the artist’s face lying like a gargantuan and demonic sleeping muse of Brancusi, sandwiched between the floor and ceiling. The eyes of the self portrait glowed with crystal red lights (the colors of the lights resonated with the surrounding sex-filled district of Berlin).

Another artist that takes from the fashion world but in a completely abstract way is Pamela Rosenkranz, who premiered her first show at Sprüth Magers and is perhaps best known for her Swiss Pavilion in the Venice Biennial in 2015, where she melted a liquid matching the standardized northern european skin tone into a monochrome pool. In her new show, the artist worked with backlit, imageless screens of sky-blue RGB in her typical way of transforming everyday consumer goods into surrealist uncanny sculptures.

A cool neighborhood, even before the 30s when Isherwood penned “Goodbye to Berlin,” in Kreuzberg we found one newcomer ChertLüdde. In Kasia Fudakowski’s third solo show with the gallery, “double standards”, we were immediately faced with a binary decision: As we entered, we encountered a small light-box that insisted we pick sides; enter the door on the right or the door on the left, which referred to a broken two-party political system. We chose to go right. No matter what choice we made, the experience was frustratingly incomplete. Yet, in retrospect, the unknown only heightened the experience. The room was mostly empty except a discrete sculpture of life-sized, carved wooden flaccid male genitals cut from the body and suspended on hooks by a leather strap, connecting penis-to-testicles: the embodiment of “liberal baiting.” A pair of wooden cock and balls attached to a fishing line of a bamboo fishing pole rested in the corner. On the door to the small attic room there was a bronze plaque that stated, “Little room for diplomacy.” Fudakowski’s sculptures were whimsical and literally post-gendered. In the other room, we supposed, wooden carved breasts hung, loaded by being left of center.

The most moving exhibition was the premiere of renowned French and Albanian-born artist Anri Sala who inaugurated Esther Schipper’s brand new, Selldorf Architects-designed space with “Take Over.” In the black-box space, a two channel video installation was projected onto a glass-cornered wall. Confronted with moving images that partially bisected the entire space, ceiling-to-floor, the pictures that struck us were formally beautiful: a close-up of massive hands playing an automatic piano—a duet of man and machine. The hands, a metaphor for humanity itself, were as large as our bodies; the piano, a loaded signifier of particularly elitist aristocratic European culture. Each of the two-part videos showed the pianist’s hands going in and out of focus while playing two well-known politically charged songs: “La Marseillaise” and “L’Internationale.”

Music replaced words in a non-narrative fabric of signification between the individual and the nation. The automatic and unstoppable keys acted like the constant drive of history: It was automation contra a human, one of the most contemporary themes. The technology we are building today is the utopian promise of salvation—but instead is the dystopic reality weaponization. “L’Internationale” was the anthem of the socialist and labor party meetings in Paris, but 2017—making the 100th anniversary of the Russian revolutions—has revealed the colonial reality of those dream. The totalitarianism of the past century. We are desperate for the humanity of the individual. In one moment in the film, the fingers, delicately stroking each note, turned into a clenched fist that smashed the keys. It was ambiguous symbol: the revolution suppressed or the hope and dream to break free from tyranny. As with all of Sala’s work, he is “interested in what haunts, not in what makes sense in the world.” Likewise, this enigma remains with us. 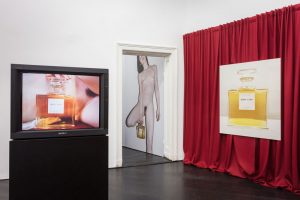 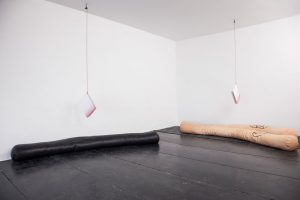 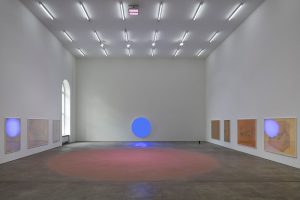 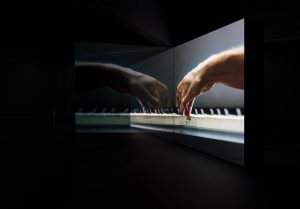