General Idea is a legend. Or, more precisely, the artist collective “trouple” made up of Felix Partz, Jorge Zontal, and AA Bronson is a myth. Like all myths, they escape chronological time. They are post-contemporary in that their works distort and “queer” our relationship with it. Art may not be able to change the world, but activist artists like General Idea can change our lives as their images diffuse into our memories. As pioneers of post-modernism, they blazed the trail for pluralism and identity-politics that would change our subjectivity. A new retrospective, “General Idea: Broken Time,” at the Museo Jumex features more than 25 years of work in over 100 objects, performances, and documentation. Active from 1967-1994, the work has only become more relevant since its creation to a younger generation more than two decades later.

The collective’s most famous body of work, “image virus” was a mega-project that occupied the group from the late 80s onward until the death of Partz and Zontal from AIDS-related illnesses only months apart from each other in 1994. They appropriated the “frame” from Robert Indiana’s icon of pop art, the word painting “LOVE,” (1966), and transformed its blue, green, and red, into the word “AIDS.” The three colors became a leitmotif of the group, standing in for the three members. By the time they made their first AIDS painting in 1987, Indiana’s “LOVE” had been reduced to kitsch by overuse in mass reproduction on mugs and tchotchkes in gift shops. They restored it to its original (if there is such a thing) and dignified form by hand painting AIDS a kind of simulacrum of the Indiana’s. However, it wasn’t this reversal into making a precious art object they were interested in, but in fact how a highbrow artwork can be polluted through circulation into lowbrow culture until it becomes a part of collective imagination. In this way, an image infects society (and our minds) by spreading through all the channels of production and reproduction.

They transformed the painting of “AIDS” into a logo, which became a graphic image of a generation devastated by the virus. As a logo, it could be applied to nearly anything and through channels of broadcasting, mass media, and reproduction the project spread quickly throughout the world from San Francisco across Europe—on posters, billboards, wallpaper, stamps, rings, and patches. They mobilized the corporate language of commerce, copyright, and paraphernalia. Culminating with posters appearing in every subway car in New York City and a huge neon sign in Times Square that flashed alternating “LOVE/AIDS.” This was art as activism that inspired many collectives in the 80s (Group Material, Grand Fury, etc.), but, in the hands of General Idea, their private identity-based self-representations, appropriation, and authorship delegation strategies seamlessly merged personal and public. The work anticipated the current world we live in, post-privacy, where we perform ourselves in a constant online show that is our own constructed virtual reality. Yet the profundity of General Idea’s work is that from this constructed fiction, it reveals to us a deeper reality.

Long before the AIDS pieces, the collective worked toward what would be their magnum opus, The 1984 Miss General Idea pageant. What began by chance (an often theme in their work) is that even before they formed their trio they lived in a communal house in Toronto with six (sometimes seven) other people, some of which were women. Capturing the spirit of the counterculture of the 60s, General Idea pushed back against the weight of dominant conservative narratives. They queered the notion of binary genders—as a three-way they were inherently not a heteronormative couple. In a post-gender move, they made space in their universe for the feminine inside the masculine. In the idea inspired by John Cage—that love is the space around our loved ones—they created this multitude of openness. The cis female members of the group were transformed into the very drag inspired Miss General Idea. From the seed of an idea grew an elaborate myth of Miss General Idea constructed pseudo-documentary, satirical, muse, teacher, guardian angel that much of their work revolved around.

The search for (and invention of) Miss General Idea began in 1970 with the first truly collective performance by the three members, who staged a satirical beauty pageant as a metaphor for the art world itself. All the contestants wore bear costumes rendering questions of gender void. These attempts to disenchant the judges were eclipsed only by Miss Honey (not in a costume), dressed in an all white gown, who won them all over with her skills on the telex—a text message machine the pre-dates the laptop. From its very inception, the performance was a radical departure in art making from the minimalist painting and sculpture that came before it. Miss General Idea would expand in time and space in impossible ways: through collages, drawings, videos, photographs, gowns made of venetian blinds, and archeological artifacts. The metafiction distorted and broke time, it was supposed to end with a pavilion in 1984, but, instead, the structure burnt down in 1977 before it was even built.

Creating absurdist alternative universes was in part and appropriation of the way corporate culture sell dreams of luxury to consumers. They took the idea of corporate aesthetics as a form of art making, especially the fashion industries with all its glamour. As a corporation they published their own lifestyle magazine, “FILE,” part fashion, part everything else that was at the nerve center of their art practice. In its eighth issue, they included a text titled simply “Glamour,” which became a manifesto for the group. “We knew that if we were famous and glamorous we could say we were artists and we would be. We did and we are.” Blurring the line between making art and just living was metaphorically encapsulated when the Time Life Corporation sued the collective because “FILE,” which inverted “LIFE” magazine’s logo, was “too LIFE like.”

General Idea’s practice has shaped the generations to come (Bernadette Corporation, Claire Fontaine, DIS, etc.). As a collective, they resisted the idea of the heroic single protean genius artist, stating, “Three men working create the basic collaborative unit for avoiding hierarchical ossification.” Ultimately, this collapsed the binary of reality versus fantasy to find the reality of fantasy itself.

“General Idea: Broken Time” is on view at the Museo Jumex from now until February 12, 2017.

View Slideshow
Tags
Above the FoldArtCollectiveGeneral Idea
Tweet this quote 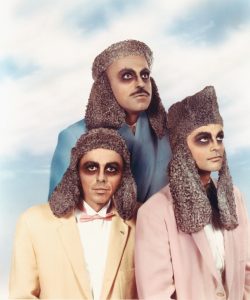 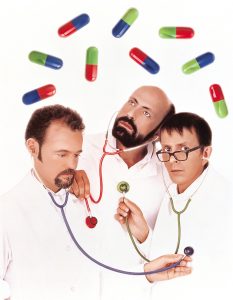 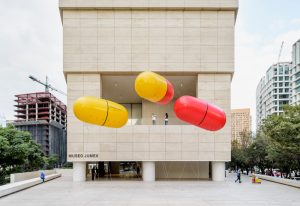 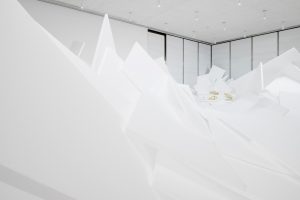 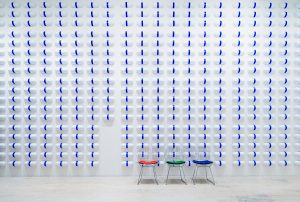