From Document No. 9, the activist and pop cultural arbiter discuss public service and life's calling.

One hundred and two African Americans were killed by police in 2015. That means nearly two deaths a week occurred at the hands of American law enforcement. Of those murdered, nearly one-third were reported unarmed. Knowing something had to be done about the senseless killings, DeRay Mckesson, an African-American civil rights activist and educator, joined Black Lives Matter, the organization founded in 2013 that campaigns against violence and racism. This past year, he quit his job in the Minneapolis Public Schools system to move first to St. Louis—he had been paying regular visits to Ferguson, in the wake of the Michael Brown protests—starting Mapping Police Violence, a group that collects data of those slain by the force in 2014, and then to his hometown of Baltimore, Maryland. He then launched Campaign Zero, a plan that calls for police reform. Last July, Mckesson was arrested in Baton Rouge, Louisiana, while live streaming a protest against the shooting of Alton Sterling. Four days later, Mckesson, politicians, enforcement officials, and other activists met with President Barack Obama to discuss solutions to police brutality against the black community in the United States.

Born at the end of the Civil Rights movement, Beverly “Bevy” Smith grew up in Harlem, New York, climbing through the ranks of the advertising world at “Rolling Stone” and “Vibe” magazines before making a name as a commentator on pop culture. She’s co-hosted television programming for Bravo and BET since, and her daily SiriusXM’s one hour radio show, “Bevelations,” has been on broadcast since 2015. Known for her cross-pollinating ideation, her ongoing event series, “Dinner with Bevy,” has brought minds from the arenas of fashion, entertainment, media, and social justice to the same table.

The two came together to speak about the pressures they face as African Americans, the importance of social media in activism, and finding an answer to end systemic racism.

Bevy Smith—Was your activism accidental or were you conscious that it would absorb 95 percent of your life?

DeRay Mckesson—I wouldn’t call it an accident, but a calling. Like most callings, something had to happen to help me see the call. On August 16, 2014 [a week after the death of Michael Brown], I was sitting on my couch at one in the morning in Minneapolis. I saw what was happening on Twitter and on the television. I decided to get in my car and drive nine hours to St. Louis. I was called to go. I believed more in the people I saw standing in the street than I did in the media, and I thought, at the very least, I’d go down there and see. A weekend turned into a long weekend. I understand it differently now; I understand my role in this kind of work now. I talked to [San Francisco 49ers quarterback] Colin Kaepernick last night about how all of the work from the last two years has been about telling the truth in public in a different way and using technology to help open up space and have that truth-telling work be different. We understand that that is the beginning of the work: Telling the truth is the hard part, but then what do we do to change.

Bevy—You just had to pick up the phone and go. Were you raised in a very religious faith?

DeRay—No, both of my parents were born addicted to drugs. My father raised us because my mother left when I was three. I grew up in a community of recovery. My father was always in Narcotics Anonymous; we grew up sitting in the back of meetings. He spoke about a power greater than his own—that was the context that I was raised in—but we didn’t go to church every Sunday. As I got older, I sort of had a distance from God because my father had such a close relationship. I believed in a higher power, but the way the belief was manifesting with my father…it was too much. When I ran for mayor [of Balitmore, earlier this year] there were some hard moments. The usual places I would go to find solace—the people and the places—weren’t there. Something happened where they were no longer available in the same way and God was the only person I could talk to.
I will never forget the moment when I prayed.

Bevy—That’s very brave of you, because a lot of times faith is a very difficult thing to have. People talk about faith all of the time—that cliché that “if you have faith, you have no worries”—but a lot of people have worries even if they’re going to church every single day. I connect with you in that way: When I was little I didn’t grow up religious, but now I am super faithed-up. I don’t believe in organized religion at all.

DeRay—When did you realize that the movement was going to spread across the country?

Bevy—It was the amount of young people I saw on the front lines and the social media activism. That was really an “OK” moment for me that we were going to show the world. Since the Civil Rights Movement died down, people have been looking for that next black moment and that next powerful black voice. Times are changing and instead of it being one person, it became a whole network of people. It was a youth culture explosion. I knew then that it was going to be an international movement. At Ferguson, the visuals and the ground! The explosion from social media; some people from earlier that day who were probably talking about busting a cap were, too, galvanized. Black lives do matter.

DeRay—As we get further from August 16, 2014, the most interesting and challenging thing is that I’ve seen people distance themselves from how unique the protests were. We were in the streets for over 300 days in uncharted territory, we had not organized like that ever before in a generation, and part of that is having access. There was no organization that led it, there was no chapter or anything; it was just people who came out and made that happen. What’s powerful is that we built the infrastructure in real time. People became the tweeters, the live-streamers. It’s been really wild to watch people rewrite history—I know some people that think an organization started the protests, but that just isn’t true. There have been so many incredible people who have done really great work that was hard and before it was popular to be a protester. Before we even knew how it would come out on the other side, there were people who were not going to be silent. That’s really powerful.

Bevy—What was really powerful for me, too, were the people in my age group that came after the affirmative action group, the second generation. I was an advertising executive—I’ve always worked inside the corporate structure and coming into entertainment was my first taste of freedom—when you see people with so much to lose be compelled to speak out, it means a lot. Some say that social media activism is not important, but it actually does a lot. There are people who have not even thought about this kind of outrage and injustice. In that space they have to take note because it’s in their face. I called out so many people in the days of Ferguson. To be silent is to be part of the problem. A lot of the work I do from a philanthropic point of view is with AIDS/HIV, specifically among youth. I’m always there for you. I’m talking about young black men being gunned down in the street and nobody is retweeting it, reposting it, sharing the post—what’s going on?

DeRay—One of the other powerful things that the movement has done is open up a conversation about the real complexities of blackness. We are talking about identities in blackness in a more public way than we’ve ever talked about it and that is really powerful. What the movement has done is created a critical mass of people who have acknowledged that there is a problem and who are talking about it. The next powerful thing is to create a critical mass of people who have the skills to do something about it and who know what to do.

Bevy—What is next? How do we take what you all have built and how do we amplify it into real, manifested change?

DeRay—One is about developing a different type of coalition. The Black Panthers, [Martin Luther] King [Jr.], SCLC [Southern Christian Leadership Conference], and SNCC [The Student Nonviolent Coordinating Committee], understood this—that we can’t win alone. In these moments, the real test is if we can organize even if the people we bring together don’t have the same goals but the same outcome of living in a world of equity. Two, I’m not sure if chapter-based or member-based organizations are going to work. I don’t think our goal is to mirror those models, but re-create new ones that organize a critical mass of people that may not want to belong to an organization but that want to do good work. The third is about keeping imaginative solutions to scale. When you think about Baltimore, where 40 percent of the adults cannot functionally read, after-school programs do not address the scale of this issue. I believe in them and I support them. After-school programs are important; I opened up one. We have to figure out how to keep solutions to scale. We could visit children born in Baltimore and give them a library, but we have to address these imaginative solutions at scale.

Bevy—How do we get companies who have made money off of [our] culture to fund these opportunities or do we fundraise within our own communities?

DeRay—If money could fix this, it would be fixed. If money could fix education, there would be no problems in education. There are a lot of people who want to give money. I worry about money without a plan. The way most people work is that they ask for money and make up the plan as they work. I’ve never seen that action lead to great outcomes for black people. Creating programs that exist regardless of their impact or outcomes is really dangerous. I’m focused on what the plan is and developing a critical mass, and once we nail that down, then finding the resources.

Bevy—How does being an activist, being black, and being gay all work in tandem? Was there a worry about your sexuality or were you always comfortable in your skin?

DeRay—I’ve always been comfortable in my skin. I was student body president in high school. Most people know my family—and that I grew up in a community of recovery—but love was one thing I never felt the need to talk about. The movement came, and then I felt that I didn’t want people to think I was afraid or ashamed to be gay. This is part of the complexity of blackness. I’m more afraid of being silent than I am of speaking up. In the [conversation of identity], we think homophobia and misogyny are manifestations of different violence and that we have to be comfortable with talking about it in public so people can change their behavior and understand the world better.

DeRay—It’s hard. Sometimes I expect to deal with racist white people, but I do not expect people who look like me to say, “The police haven’t damaged the community.” I would love to work with someone who has a large reach like Oprah Winfrey. What Oprah did for daytime television helped people process a complicated world—I’ve come to accept that so we can push them to think about the world differently.

This story originally appeared in issue No. 9 of Document. 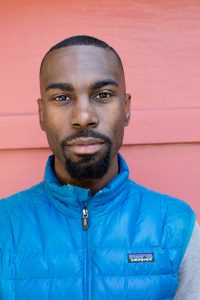 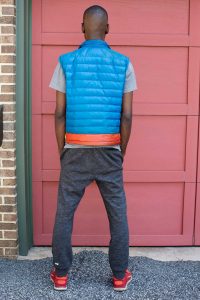