The 21 year-old who has already created work for giants such as Instagram and Uber speaks on exposing the youth to new technology, and why we need to dismantle the white middle-class bias in tech.

“Where the world is going and with the digital revolution—everything is going to be an embodiment of tech in some way,” says Iddris Sandu, 21-year-old tech architect. Iddris first learned the languages of coding when he was 13 years old, camping out for a full year in his hometown library. His depth of knowledge was noticed by an employee of one of the largest technology companies in the world, who offered him an internship at Google that same year. In highschool, Sandu built a mobile software program which led him to win the honorary Presidential Scholars Award from Barack Obama. At 18, he sold an algorithm to Instagram and was consulting for Snapchat, then moved to Uber to create the Autonomous Collision Detection Interface for their autonomous vehicle program.

Sandu continued to look for more substance in his work. In Silicon Valley, he explains, everyone knows what augmented reality is. Sandu actively works to expose this technology to different communities, and did so successfully with rapper Nipsey Hussle in 2017, creating a ‘smart store’ in which combined technology, fashion, and music into an experience most had never seen before. This may be a simple idea in Silicon Valley, but it was a revolutionary and inspiring one outside it. Sandu and the smart store got the attention of major figures such as Kanye West, Jay Z, and Jaden Smith, who are now working with him to bring technology to young communities of color. Document’s Sam Weir spoke to Sandu about the intersection of fashion and technology, exposing the youth to new tools, and how spirituality will save us from the augmented reality future.

Sam Weir—I know you work in the fashion world a lot. I find the intersection of fashion and technology interesting, and the future of it exciting to watch. How do you approach that intersection?

Iddris Sandu—For me, it’s like I apply a Spike Jonze outlook. Basically, in his films and videos, the technology almost disappears and becomes one. I do that with my integration of technology and fashion—making it work in a way that is seamless and not forced. Something that encourages the user to simply do something, not to feel forced, to do it but because it seems right. For example, opening a door—it doesn’t have to say push on it for us to know to push. These things are innate to us, so creating that same level of seamlessness with fashion and technology integration is my approach.

Sam—In the past, many have attempted to combine fashion with new innovations, but it can feel a bit gimmicky.

Iddris—What makes products gimmicky is not the application of the technology but more so how its applied, and usually it is applied without authentic storytelling. Look at what I did with Nipsey Hussle and augmented reality. It was the way that we were able to create authentic storytelling, and basically release an album through these pieces of clothing, that made it different. The culture already had a strong sense of connection with it. I took that strong sense of connection with the authentic story and then used technology as a layer on top of it. That’s why it worked so well and Diddy and Jay-Z got hip to it.

Sam—What piece of technology in that store are you most proud, of or see the most potential with?

Iddris—My main goal is encouraging more kids to get away from the idea of just building apps and core infrastructures like cloud services. However, before I can do that in an area where the minority voices are diminished on the micro, I need to sort of spoon feed the culture to impact on the macro. Creating the smart store experience—my main goal was to shift the mindset. The hardest thing you can do is shift the mindset. The fact that after I did the smart store I visibly saw it, was very fulfilling. 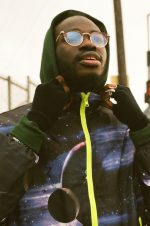 Sam—I am the same age as you [21], so I really love that you actively call on our generation to step up and be part of the conversation. You do have a seat at the table, you’ve worked at all these companies. How do we demand room for others to follow? Exposing them to the right sort of information, and allowing them to have the ability to dream is so important, but how?

Iddris—I had tweeted the other day, ‘The youth are now being burdened to provide solutions to all the problems that they were not responsible to creating in the first place.’ We are born into a broken world, we have to be the clean up crew before we start innovating. It starts with exposure. We must expose our youth instead of educating them. If I’m being taught something, what is the chance that it will be relevant within the next three months, even? The average shelf life of technology is less than one month now. I would much rather expose you to the information I have, and you choose what you want to do with that, then you spread it. In doing so, we can innovate, spread information at a higher rate, and prepare our youth to make changes in this world.

Sam—Do you think these tech companies are finally realizing the youth are a major part of their consumer base and where they make their money? Take how Rihanna posted about Snapchat and their stock took a nosedive.

Iddris—I talked about this in my Ted Talk but there is this idea that the culture is supreme. These tech companies want to act like the culture needs them but in reality they are nothing without the culture. Whether you want to use that as pop culture, Afro-American culture, Latino culture, Asian culture, it is all one and they just need to be more accountable. The people that need to be on the board of directors are the people influencing the culture. They shouldn’t have someone 40 or 50 years old saying, ‘I know what the youth wants.’ There shouldn’t be any of that. There should be people who are actively influencing the culture, out here sitting down with those people, and saying, ‘Hey, this is what this is what our generation is into. This is how we can market and improve things.’ 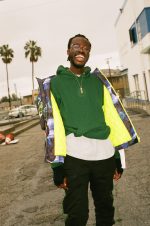 Sam—Technology can be frightening. The idea that we are all going to be living in this fake reality, because the real one is too sad, seems very possible. Is this something we should be afraid of?

Iddris—I never operate with fear, but I do operate with caution. These algorithms are being written with bias, usually by white male figures that are not only oppressive towards people of color but also to women. People do not even understand the importance of women being in technology and being programmers and being in those meetings. We are creating all these algorithms and we talk about AI, and even if AI can make its own mind, who wrote those algorithms? Steve Jobs is one of my biggest inspirations but Apple was created for the middle class white American family. It wasn’t really created for everyone to access it. Any platform developed by an un-diverse team from the ground up automatically renders it biased. So when I’m even talking about creating this operating system, it’s not to say, ‘Hey, this is a black-owned operating system.’ No, it is a people-owned operating system, and we are not going to make the same mistakes as those before us.

Sam—I feel like the human connection will always bring us back to reality. But, I don’t know, maybe that is something [big tech] can replicate…

Iddris—I completely agree with you on that. It will all come down to spirituality. That is one thing you cannot irradiate or remove. Without a soul connection, even if we create this killer AI platform, it won’t be able to be empathetic. It is a machine, not a human being. I agree with you, I do think it is going to come down to that at the end of the day. I talk to my friends about that, and I do want to make sure we get the right message out there.

Sam—What is something or someone who really excites you right now?

Iddris—Everything that we are doing and everyone that we are meeting with. Jaden [Smith], and what he is doing with Just Water. Yara Shahidi and everything she is doing with Eighteen x 18, a platform she created to increase voter education and outcome. Noor Tagouri does a lot of motivational and public speaking. It is exciting, the fact that a lot of friends I am working with have this common alignment in values. I have been exposing my friends to this idea, ‘Operating for purpose, instead of operating for profit and nonprofit.’ We simply operate for purpose. In terms of people that excite me, [it’s] Noor, Jaden Smith, Yara Shahidi—the youth that are out here and killing the game in terms of youth impact. 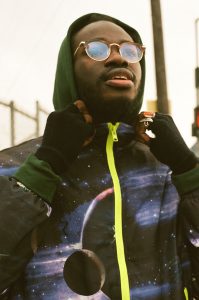 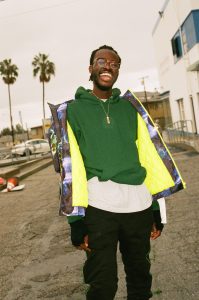