Future, In Conversation With Italo Zucchelli

Although music and fashion share the capacity for self-expression and the ability to affect one’s mood, they are two vastly different creative outlets. Italo Zucchelli, the men’s creative director for Calvin Klein Collection, discusses the relationship between sound and style with musician Future.

Nicholas—Let’s start by talking about how music intersects with fashion.

Zucchelli—I think that there’s a link between fashion and music in general. They feed off each other in creative terms. Music and fashion have a common language that is very ambitious and which brings different people together. Artists making hip hop music, they like to experiment and they like new styles, so they’re perfect for fashion.

Future—Hip hop does embrace all that. It’s part of the culture to express the way you feel through your clothes—same as expressing yourself through your music. You can wake up and feel good about what you’re putting on, having a unique style, and with the style comes fashion. Hip hop, above all, is being creative. When I dress up I get creative, just trying on new things and wearing different textures and different layers. From how I wear my clothes I just go into work and make a beat, it’s like clicking and being and leaning over the beat, and laying in different textures to make a song. It’s like when you wake up in the morning, you express yourself differently every day, and every day is a different new song coming out. That’s how I feel about fashion.

Zucchelli—Clothes and music are both ways to express oneself, to say who you are, what you believe in.

Nicholas—Italo, how does Future represent the Calvin Klein man?

Zucchelli—When I met Future, he was wearing one of my jackets, a full herringbone. He was wearing it as if it was his special thing, he looked comfortable in it, he was very confident in it. That’s the best that I can ask for, because it was quite an interesting design piece and he wore it with such an effortless ease. That’s why I love working with the people from the music world, because they have personality, they have character, they’re very confident, and they have style! Whatever they wear, they give it a new spin.

Nicholas—And Future, what draws you to Calvin Klein?

Zucchelli—But it’s great to see you wearing these clothes! One can tell you’re comfortable in them, it’s not like you’re doing all this because you have to—you’re wearing the clothes because they just make you feel good, and that’s what it’s supposed to be. When your clothes are worn by somebody with personality and character, it gives the clothes even more personality and character.

Nicholas—How does hip hop inspire you as a designer?

Zucchelli—Hip hop has so much energy and so much style. I respond to the energy of music in general—I always did, it’s part of my process—and hip hop especially.

Future—I pull inspiration from everything, from different conversations. Fashion inspires me, different walks of life, different trials and tribulations, other artists inspire me. Everyday life: I get inspired by the simplest things.

Nicholas—Do you think that’s about producing different things for different kinds of people, or that a particular approach should appeal to everyone?

Zucchelli—I think you need to do what is of interest, but I think it’s very important to not be too comfortable about it. When I think about my job I always compare it to music. It’s like creating the perfect radio hit that everybody loves, and that seems it was the easiest thing to do, but the reality is that it took a genius to create. It’s that curve, the achievement of a perfect song that sounds really new and super commercial at the same time. That, to me, is genius, the achievement of genius.

Nicholas—Future, do you consider yourself an entertainer or an artist?

Future—I think of myself as, uh, I’m more of a lifestyle. It’s a lifestyle that comes along with being an entertainer and artist in the same sentence. I just create moments, in music we create moments, expressions to try to pull the audience out. I step outside my comfort zone to feel it and just be able to get the audience. You speak with different people that have different ways of life, so you have to think outside the box. I overstep boundaries with music and fashion just to touch different audiences and people who wouldn’t even listen to my music.

Nicholas—You two recently saw each other in Milan.

Zucchelli—Future, did you have fun there? It was your first time.

Future—It was my first time in Milan, and one of the best experiences of my life, being able to go to a fashion show as an entertainer. Y’all laid everything out, made it so comfortable for me. Also being able to go out to dinner and sit down with you to talk. That was the most special moment overall, finding out what inspires you, just finding out about each other, sitting down with each other and just understanding how much love we have for fashion, understanding where the line comes from, the new collection. We had a great conversation. It was like family, like meeting your family for the first time.

Zucchelli—Yes it was as if I had known you for a long time. And in fact the day afterward I discovered you were going to be a father! I was so excited. Congratulations! It’s always interesting to speak with people from other disciplines that are your type of people at the same time.

Future—Very exciting, yeah. I enjoyed myself.

Zucchelli—How is Ciara? Is she good?

Future—Yeah, she’s good. She just walked in the room but walked back out when she heard I was on the phone doing an interview.

Zucchelli—Give her a big hug from me. Congratulations about the baby for the both of you, that’s very exciting! 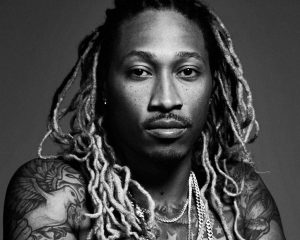 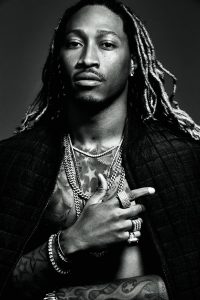