The Russian artist brings his series ‘Young Blood’ to Belgium and asks you to participate by donating your own blood.

Last Friday, in the sleepy industrial town of Charleroi in Belgium, the Russian artist Andrei Molodkin was getting ready for people to give blood in the name of art. His latest piece is part of an exhibition called Black Horizon, staged at BPS22 in collaboration with a/political, which tackles censorship and propaganda. Molodkin’s contribution features blood, donated by visitors to the museum, pumped around lyrics from banned or censored songs.

One of the first people to donate was the performance artist Franko B, known for using blood in his own work. In 2003, Franko B walked down a catwalk in London’s Tate Modern with a cannula in each arm, clenching his fists as he bled onto the floor of the gallery’s Turbine Hall. Grinning ear to ear while Molodkin took pictures on his smartphone, Franko exclaimed, “I am the godfather of blood!” as a tube from his arm to the artwork began to fill up and run deep red.

Young Blood is made up of several stations. At each one, an intricate system of refrigerators, pumps, and projectors connects to a transparent box sculpture featuring a set of lyrics in block lettering. Visitors are asked which work they want to contribute to before their plasma is syphoned into a refrigerator and systemically funnelled into the box of their choice. “You can see what is most popular by the amount of blood in it,” Molodkin explains.

Behind each box is a live projection—illuminating every droplet or air bubble as the container slowly fills. Over the loud regular popping sound of an industrial compressor—similar to that of an air rifle—Molodkin tells me the pump system was modelled on the human heart. But, standing in the room, it’s hard not to notice the stringent smell of chemicals. One staff member speculated it was probably the anti-coagulating formula they use to ensure the blood stays vibrant and runny.

Thanks to tight and complicated logistics, donations aren’t being made throughout the entire show, but two people on hand on the day of the opening—one a trained nurse and the other Molodkin’s assistant—told me everyone who had given blood so far had been nothing but enthusiastic about the prospect of being a part of the artwork. “You need to be relaxed to give blood,” one of them commented. “But some people are so excited it can make it quite difficult.”

Affectionately referring to his work as a form of “blood karaoke,” Molodkin wants to encourage active participation. “Karaoke [is] when people repeat sentences from songs,” he tells me, “but here they repeat them using their own blood.” The lyrics all come from banned or censored songs, he tells me, but they’re predominately from noise and drill music.

Despite originating in Chicago, drill has recently been butting heads with authorities in England because of its violent lyrics and association with gang culture. Last month two drill rappers were given a suspended sentence for breaching a gang injunction by playing a gig; essentially making it illegal to perform their music despite it not being a crime in and of itself. “What is now forbidden in our society or music, like a gang or anything violent…I try to show in the most official museum,” Molodkin tells me while pointing at the blood. “It’s like a red line.” 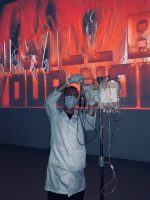 Standing alongside Young Blood are new canvases and a sculpture by another Russian artist, 85-year-old Erik Bulatov. Inspired by Soviet propaganda, and standing in between Bulatov’s canvases, the sculpture reads, “Everything is not so scary” in Russian text. Both artists live in France, and have been friends for decades, but this is the first time they’ve shown together.

Now in his early 50s, Molodkin is a prolific and controversial artist. Born in Russia, he served several years in the Soviet Military during the late 80s—an experience which has heavily shaped his work. In 2009, for the Russian Pavilion at that year’s Venice Biennale, Molodkin mixed the blood of a Chechnyan soldier with Chechnyan oil to fill a Hellenistic sculpture of Nike—the Greek goddess of victory. “Blood and oil are the two unique liquids on our planet,” he says. “Only two—the blood and oil.”

But in Young Blood, who the blood comes from is irrelevant—it’s about why it’s donated. “I want to put [the audience] in front of something for which they’re ready to give blood,” he explains. “People say democracy or things like that aren’t working because they are just empty vessels. It means nothing.”

Molodkin is adamant the show is about censorship and propaganda from across the world, and not just about fraying relations between Russia and the West. But shown alongside Bulatov’s bold Cyrillic canvases, his work—featuring only examples of banned British music—touches on the relationship between Russia, the West, and censorship in a confrontational way. “One curator in Russia told me that the contemporary reality [of making work in Russia] is if you don’t go to prison [for your work] it’s not contemporary art,” Molodkin says. “If you’re only allowed to make work in the past or in the future, you’re not doing it right.” 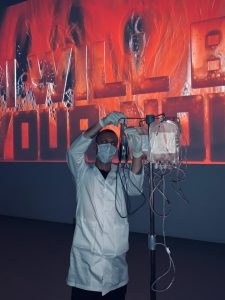 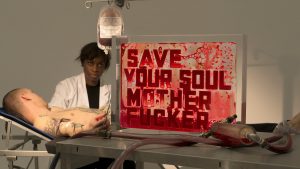