Document spoke to eight founders about creating a vision of empowering sexuality that doesn’t include a wonderbra.

John Waters and Edmund White decode death, sexting, and the flaws of Dalí

Ahead of Waters's new essay collection, 'Mr. Know-It-All: The Tarnished Wisdom of a Filth Elder,' the writers reminisce on glory holes and redeem Warhol's legacy for Document S/S 2019.

The Making of Hiroshi Fujiwara: 6 subcultures that shaped the ‘Godfather of Streetwear’

Danish design duo Helena Christensen and Camilla Staerk collaborate with artists who inspire them for ‘In My Dream Last Night…,’ a short film and sound concept premiering exclusively on Document.

The new zine celebrates the artists keeping the inventive, youthful spirit of the Second Summer of Love alive in its first issue.

The frequent Tyler, the Creator collaborator spoke to Document about growth, his booklist, and what's on his 20s bucket list. 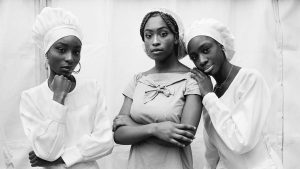 The designer of 1017 ALYX 9SM and the techno DJ discuss ephemerality and authenticity in the digital age for Document S/S 2019.

For Document's S/S 2019 edition, we scan the landscape, both past and present, to identify the power structures, technologies, and cultural forces that shape what we see and how we see it.

The pair dissect the enduring design needs of the tech and the tactile for Document’s S/S 2019 issue.

The artists discuss streetwear, Orientalism, and the shifting demands of the art market for Document S/S 2019.

4 creatives on being painted by Chloe Wise

On the occasion of Chloe Wise’s portrait exhibition ‘Not That We Don’t’ at Almine Rech London, Document reached out to her subjects to gain their perspective.

Shamir, music’s accidental pop star, is finally back in the spotlight

On the release of his 5th studio album, ‘Be the Yee, Here Comes the Haw,’ the unpredictable singer-songwriter tells Document about his personal rebuilding process and his love of cold leftovers.

FAR–NEAR, a cross-cultural book series aimed at broadening perspectives of Asia, launches its second issue with a short film about hair and heritage.

Anna Sorokin—the fake heiress on trial for swindling New York’s elite—is being propped up as a symbol for millennials as deluded, entitled, and narcissistic.

Activists, artists, and entrepreneurs took to the tenth annual Women in the World Summit to discuss ageism, gun control, and why it’s time for men to ‘get the facts, write a check, and move out of the way.’

The artists reconstruct the idea of home in their Fondazione Prada exhibition ”Whether Line.”

Document caught up with Mugler’s designer during Salone del Mobile to find out his tricks and rituals for finding inspiration.

Corey Wash’s art is an etiquette class for abject millennials

The artist and model is advocating for better communication through art.

With the fight for LGBTQ rights increasingly being waged online, Document speaks to four individuals on the frontlines.

On the 100th anniversary of the Bauhaus, look at five groundbreaking women who were erased from art history.

6 stories of compassion and contradiction on America’s southern border

In 'American Backyard,' photographer Elliot Ross and writer Genevieve Allison give voice to the families, ranchers, and indigenous activists negotiating life on the U.S.-Mexico border.

5 Agnès Varda films that taught us how to be vulnerable

Document remembers the vulnerable tenor of Varda’s oeuvre—and the 5 films that it is best embodied by.

The photography critic and scholar resists shortcuts and oversimplification. True representational justice demands a shift in context—in other words: this is a job for everyone. She gets to work in Document's Fall/Winter 2019 issue.

For Juilliard president Damian Woetzel, there is more than one definition of artistic success

Woetzel comments on building a brighter, more inclusive future for the prestigious conservatory and cultivating a spirit of versatility and collaboration in the young artists of today for Document's Fall/Winter 2018 issue.

The artist explores the disturbing resonances of domestic life and white nostalgia in "Black White and Red All Over" at Monique Meloche Gallery.

Noname's new track, ‘Song 32,’ is just for her fans. In Document's Spring/Summer 2019 issue, she and Lakeith Stanfield talk dodging and chasing the spotlight.

We hear from Jose Antonio Vargas on immigration, Marion Nestle on food, Damian Woetzel on the arts, Sarah Lewis on images, and Irin Carmon on power in Breaking Points, a portfolio from Document's Fall/Winter 2018 issue.

For journalist Irin Carmon, the only way to survive is to stay nimble

The journalist who helped to expose Charlie Rose's long history of sexual harassment discusses #MeToo and the future of investigative reporting in Document's Fall/Winter 2018 issue.

Stella Donnelly is telling the world off, and having fun doing it

The Western Australian-based musician just released her debut album ‘Beware of the Dogs,’ which finds itself as the perfect balance between levity, hushed introspection, and biting cultural critique.

Helen Schulman explores age-old questions in the age of information

Set in a Silicon Valley multiverse ruled by apps and algorithms, Schulman's latest book 'Come With Me' reveals the myriad consequences of our gluttonous hunger for knowledge.

Nestle details the pernicious tactics of food and beverage corporations to prey on the vulnerable and encourages her readers to get involved in fixing a broken food system in Document's Fall/Winter 2018 issue.

The author of ‘Dear America’ and founder of Define American on queerness, transformative tech, and living openly as an undocumented immigrant for Document's Fall/Winter 2018 issue.

Why everyone is rediscovering the spiritual illustrations of Emma Kunz

The Serpentine in London plays host to the UK’s first solo show of the Swiss naturopath, healer, and environmental artist.

What is ‘emotional labor’ and why can’t you invoice for it?

Artist and activist Liv Wynter explains why we need to redefine the term emotional labour.

Wardrobe Therapy: sorting out my inner psyche and my summer aesthetic

In the era of minimalism and Marie Kondo, we’re made to feel bad about not wanting to give items up. Janelle Abbott's 'Wardrobe Therapy' makes sentimental attachment something to be proud of.