In popular culture, the ‘echo chamber’ is a moniker for circuitous news media and their attendant feeds, which are reinforced by a closed network controlled and governed by private sources, governments, and corporations. It is also a metaphor for the historical dominance of capital and the cultural, social, and political systems that dictate its access, production, and distribution—this ‘capital’ wooing (and thus privileging) particular images, languages, skills, histories, and geographies. Most tangibly, the ‘echo chamber’ is the space wherein sound hits and reverberates, where memory and imagination echo across surface, across space and across time.
-2019 Sharjah Biennial curators Zoe Butt, Omar Kholeif, and Claire Tancons

For the 14th Sharjah Biennial, which runs through June 10, the exhibition’s three curators—Zoe Butt, Omar Kholeif, and Claire Tancons—gave it a title appropriate for today: Leaving the Echo Chamber. Through the 80 artists they present, they pose the following questions: What does it mean to demand alternative images at a time when news is spoon-fed to us by a monopoly of sources? How do we expand our narratives by acknowledging what has been hidden or removed? How can we reflect on our own culturally located histories in an era when so many individuals have been forced to believe that they most surrender their own agency to the mainstream forces that exist and govern our world?

The biennial challenges both what we know and what has been kept hidden from us against the backdrop of Sharjah, the third-largest city of the seven United Arab Emirates. In Otobong Nkanga and Emeka Ogboh’s installation “Aging Ruins Drowning to Recall the Hard Chisel from the Past,” the duo, who are based in Europe but both hail from Nigeria, look at the circle of life through the ruins of a former Emirati home Bait Al Aboudi. Man-made craters filled with seawater and salt evoke both the beginning and end of life in the untended garden, where voices of children from Sharjah sing for rain play over loudspeakers.

Hrair Sarkissian, an artist born in Damascus and based in London, recalls the migration path of the extinct Northern Bald Ibis, a species of bird that no longer exists due to the lack of conservationists in Syria as a result of the violent conflict there, with a video and replicas of its skull. While Sarkissian examines a lost animal species, Filipino artist Kidlat Thimik looks at the phenomenon of American exceptionalism in the Philippines, a former U.S. territory, through the imposition of Hollywood. Thimik created a vast installation of wood carvings, fusing together traditional Igorot statues with Hollywood iconography, like Marilyn Monroe holding her skirt down or a cowboy pointing his gun.

Tuan Andrew Nguyen, a Saigon-born, American artist, created a project that tells the story of the Senegalese soldiers enlisted to fight against the Vietnamese during their uprising against the French in the region formerly known as Indochina. After the French defeat, hundreds of Vietnamese women and the children they had with the soldiers left to Senegal with remnants of their culture. Children would grow up never knowing the customs of their mothers’ homeland. Nguyen presents their narrative through a series of historical photos and a video. In it, the consequences, both positive and negative, of colonization and post-colonialism become evident.

Chilean artist Alfredo Jaar highlights the fact that women are often overlooked and invisible by giving important female activists the spotlight in “33 Women” by shining a literal spotlight on tiny portrait of each of the women, who include Malalai Joya, the youngest Parliamentarian to be elected by the National Assembly of Afghanistan; Kalpona Akter, a Bangladeshi labor activist who started working in a factory at age 12; and Nawal El Saadawi, an Egyptian doctor who was fired from the Health Ministry in 1972 for discussing subjects like female genital mutilation.

Khadim Ali brings to light the normalization of violence by putting focus on the phenomenon of Afghanistans naming meeting locations by suicide bomb sites through a sculpture of a missile pointing nose down in the middle of a traditional Middle Eastern courtyard. Suchitra Mattai collected vintage saris from India, Sharjah, and her own Indo-Carribean family and weaved them together, resulting in a rainbow of the layered experiences that combine politics, community, and one’s own individual story.

The 14th Sharjah Biennial provokes while highlighting the way culture has reshaped the land on which we live, transformed the languages we speak, hides the histories that should have been told, and can be used for both positive and negative change. We leave the so-called echo chamber and confront it head on. 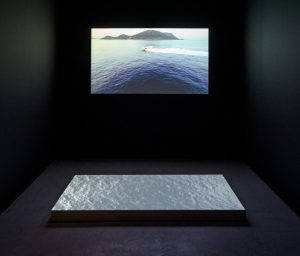 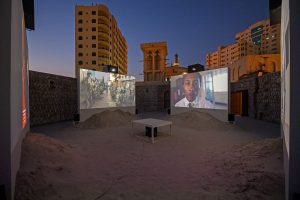 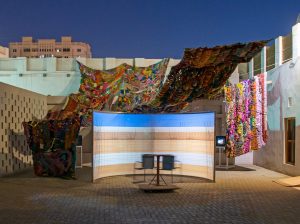 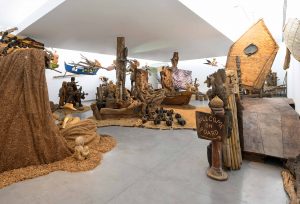