The artist and model is advocating for better communication through art.

Corey Wash has developed a knack for getting people to talk about important things in relatable ways. Earlier this year, the artist and model stole the Gypsy Sport fashion show by appearing on the runway pregnant and wearing lingerie, proving sexuality and maternity aren’t mutually exclusive. But for Wash, it was nothing out of her ordinary.

Her latest show, Conversation Derelict, at ABXY gallery in New York, is just another outlet for her fresh take on societal issues. Each of the works is filled with pictorial, Basquiat-type sharp colors, underneath scratchy black outlines and illustrative narratives, which all act as a backdrop to the life of a genderless creature called Willoughby—the main character in Wash’s world of comic strip frames and thought bubbles. “Willoughby is all of us,” Wash explains to me over the phone at her family’s home in Baltimore, where—now six months pregnant—she been spending more and more time away from her usual bi-coastal lifestyle. “I didn’t want to paint myself telling this story. I wanted to create this character that looks like nobody but everybody is them.” 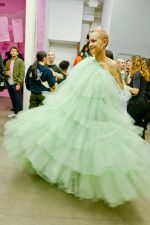 Wash’s work burrows into the contradiction that, despite living in an epoch of interaction, at times we still talk to one another in terrible ways. “Towards the end of last year, I began to see a pattern of different things—headlines that pop up that are misleading, and we process the news or conversations with friends or family members,” Wash explains. “I realized that with the advancement of technology and the rise of social media—and also just, like, our bad access to information—we still struggle to use language in a way that benefits and evolves us as a society.”

Wash isn’t trying to police what we say. She’s only asking if there’s a less destructive way of expressing ourselves. There’s not one specific thing the artist wants the viewer to take away from her show. “A lot of time I’m very direct,” she says. “But recently I’ve been exploring ways of removing the dialogue and letting the audience interrupt it for themselves.”

Consisting of 10 works on canvas, one wood sculpture, and one projected video, Wash’s show is an Aesop’s fable of sorts—using Willoughby’s own trials and tribulations as a way of getting us to stop and think about our own actions. “There’s a family having dinner, the parents are actually arguing and, like, yelling at each other in front of their children,” she describes. “In the next slide, one of the parents are saying, ‘You know, we shouldn’t have said that in front of the kids.’ And the other parent is saying, ‘I’m sure they don’t even remember.’ And then you see the kids actually do remember it, they’re actually processing it in different ways. And, then it ends with one of them all grown up, speaking to their significant other or their friends or their loved one in the same manner that their parents were yelling at the dinner table.” 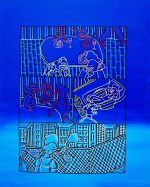 Corey Wash, It Starts at the Dinner Table. Photographed by Bryan Ellingson.

Not every aspect of language and how we use it is in decline. “Everything needs to evolve for the better,” Wash says. “We have the tools to get there but we need to use them in healthier ways.” Take a quick skim of the lay of the land when it comes to language, and you could argue some of what Wash advocates for is already happening. Preferred pronouns are just one of the ways we’re trying to engineer a new dialect understanding of how words can work their way into our psyche, and live there for longer than the seconds it takes for someone else to utter them.

The first time Wash realized her art could be a way of talking about heavy issues was after the death of Freddie Gray and the Baltimore riots. “I was in LA and a very close friend of mine, Devin Allen, was photographing a lot of what was going on—he was in the trenches,” she recalls. “One of his photos was selected to be on the cover of Time magazine. It inspired me. I was feeling a lot of the anger that was going on around Freddie Gray’s death, and I knew I had to express it in a way that wasn’t just verbal.” Seeing that happen in her home town spurred Wash to take hold of her artistic responsibility to reflect on the world around her.

Despite working into such a recognisable style, Wash is totally open to new projects, ideas, and forms in the future. “I do like to tell stories and other ways, and I do still like to do photography, and I do still like to model,” she says. “I’m also really interested in music and I’ve been learning how to play different instruments. But visual art is what comes most naturally to me right now.” 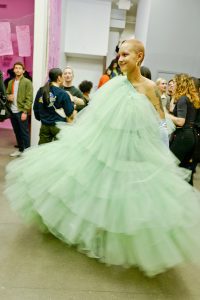 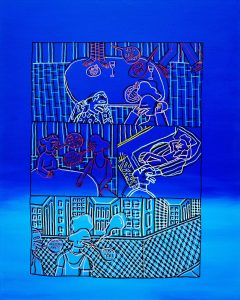