Like many Americans, Paul Anthony Smith came of age straddled between two cultures—the Jamaican one he was born into that imbued his childhood, and that of the America where he spent his adolescence and adulthood. Although he spent the first decade of his life in Jamaica, Paul Anthony Smith moved to Miami at nine, where he lived in Miami Gardens until he moved to Missouri to attend the Kansas City Art Institute, before moving to the Bedford-Stuyvesant neighborhood of Brooklyn, where he currently resides. Smith found himself losing aspects of his Jamaican heritage, while inadvertently picking up American cultural codes—the accent, the style of dress.

Smith’s art is like an autobiography; he captures the narratives of his life with a camera, exploring the people, places, and moments that have moved him in some way, sometimes fusing a number of images together to form one amalgamation. From a distance, it looks as if he’s simply put an overlay over the images that resemble the architectural motifs of his youth—the concrete breezeways found in Jamaica, Miami, and many other tropical climates. But, upon closer examination, it’s revealed that he has meticulously picked at the image with a tool that he created, to form the patterns through a series of perforations. He grapples with this conflict in identity, questioning both Jamaica, the place he left, and the United States, the country where he lives. Smith has brought this work together in an exhibition appropriately titled Junction, on view through May 11 at Jack Shainman’s 20th Street and 24th Street locations in New York.

In Junction, inspired by Carribbean scholars Frantz Fanon and Stuart Hall, Smith ponders over post-colonial Jamaica and the traditions that have formed both within the island nation and from the diaspora that has left it. He also looks at the current state of America and gentrification with the help of Paul Beatty. In the exhibition, there are many dualities; old and new, life and death, Jamaica and the United States, the haves and the have-nots. Here, in his own words, Smith takes Document on a tour of Junction, explaining in detail the stories behind a selection of works.

I went back to Jamaica for this gathering. It’s capturing these people in this moment, just like the nuanced nature of pedestrians. It’s the residual of a funeral. It’s dark, most people wear black, white, or subdued tones to honor those who have passed on. In this moment, seeing these people, I needed to capture what was happening for myself. It’s not necessarily to share with a wider audience. But over time, this image became present in the story of this. It was thinking about history, thinking about the people in these images and where they probably want to be or goals that they have in life. I know the person who passed—I met them before they passed on—and seeing that going on… It’s about owning your life while you’re in the moment, taking risks and moving forward.

This work is called “Lands Apart.” And these two coasts lines—one could be in Jamaica, one could be in America, but it’s a metaphor for saying that Jamaica, and Miami have a similar coastline, similar feelings in the atmosphere, but you’re still navigating a similar flame and learning to be in a new environment. It’s easier to go to Miami than to go to the Caribbean to get the same experience. 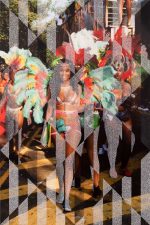 [This is] at the West Indian Labor Day Parade in Brooklyn. This is more so closer to Crown Heights and Eastern Parkway. Some of these images are photoshopped and collaged together prior to being worked on the surface. As a spectator, you’re supposed to be on the sidelines, watching the event. I’m interested in being in the middle of history, getting up close to these individuals and watching how they dance, perform. It’s about being in sync, in motion. Because these events happen, these people act out and not [like] themselves. They become something else because they become more spiritual, either from the dancing, the song, the drinks, the atmosphere, or the camaraderie that occurs. They become someone else, that’s why I have to blur them or cover them up. I find that I’m not myself. I’m more open. A lot of these diamonds came from earlier work that I was making and are in some ways are reminiscent of flags.

Much of the feathers and accessories are decorative elements important to cultural representation, passed down through African traditions in the Caribbean, which contains unique meaning based on region and tribe to form a code that highlights the essence of a character’s role within its spirit.

I know these people, I’ve seen them going up. It’s like going back and living and understanding what life is like. If you didn’t leave, would you be like these sorts of people that are still there? How do you have conversation, tell them what you do and give them insight into a new space? Or do you just hang out and don’t talk about that? It’s about like having the desire to leave. This is about leaving. I just try to hang out. I try not to speak too much about what America is because in some way America symbolizes vanity. It’s like moving to America is symbolizing a form of opportunity. I remember my adolescent years, I was, like, man, should I stay? Or did I do the right thing? Because I think, in all countries, America is the way to go. Being in America and living in America, sometimes I find it problematic because—it’s hard. The upkeep of being an American is so costly compared to being back home. And it’s like I can’t tell these people what we are willing to pay for rent for nothing. These people have the life that we want. The calmer, relaxed oceanfront, the beautiful view. And we have the life that they want. So it’s that same trade off.

The title came from this quote which Paul Beatty wrote in the book The Sellout. In the courtroom, Mike Tyson was like, ‘Only in America can you own a mansion and be bankrupt.’ It’s the same idea of, like, vanity, and how you could own all these things, but there’s a cost to it. There’s that property tax—even though he’s bankrupt, there the upkeep of that house, there’s the maintenance of paying people to take care of it. And so this is also speaking about raising the cinder blocks. It’s also thinking about how these motifs are used to protect us and also exclude others. It’s also speaking about gentrification—how, you know, you’re watching your neighborhood shift based on property being chained off, and property being taken down and put back up. This was photographed in Philadelphia a few years ago in the South Kensington neighborhood, which is going through a rapid shift, gentrification. This work somewhat relates to being in Bed Stuy and seeing how much the neighborhood [has been] gentrified and houses are selling for triple the market prices they were six years ago.

This one is called “Introspection.” It’s thinking about self reflection, which is what I do often when I’m making these things. [The subject is] another person I know in Jamaica who is in other images, but you’ll have to find him. The cell phone is in his hand like he’s waiting for a call, or to make a call. It’s also why it’s introspection. There’s some anxiousness and nervousness in these photos. It’s about having this freedom but always being conscious of this overbearing power. These are hazardous stripes that’s on the ground, or the subway, or places where it says, ‘Do Not Enter Back Up, Back Away.’ 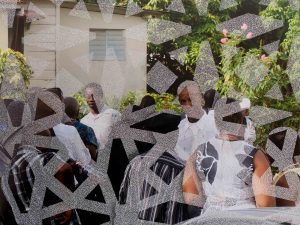 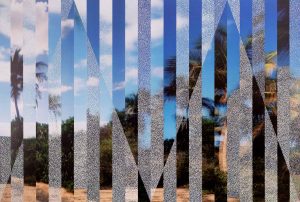 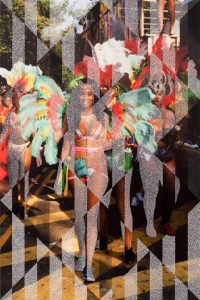 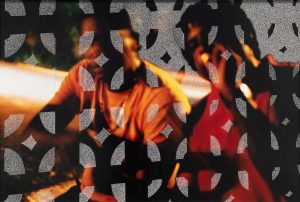 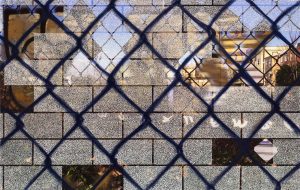 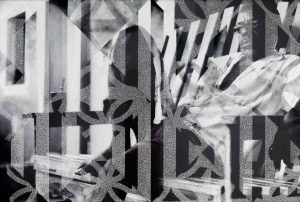