The artist explores the disturbing resonances of domestic life and white nostalgia in "Black White and Red All Over" at Monique Meloche Gallery.

In her exhibition of new work at Chicago Monique Meloche Gallery, Genevieve Gaignard asks us to come home—to explore the tangled resonances and erasures of American public and private memory, to reckon with the more sinister implications of domestic signifiers.

“Everyone has that kind of moment, things from their past that can just bring them back to a specific time, a moment, and not always a good moment,” she said. “You can hear a song, smell something, see a specific pattern of wallpaper, a toy or game, and be taken back. I am giving the viewer a lot of clues to show them that they are part of this story, it’s not just my story.”

On view beginning April 5, Black White and Red All Over debuts mixed media works as well as an installation: a room engulfed in red patterned wallpaper and decorated with kitschy domestic objects, casting American nostalgia in a disturbing new light.

The mixed media works, collages on panel constructed from vintage wallpaper and imagery from lifestyle magazines like Ebony, Life, Jet, and Home & Garden, reconstitute the narrative of American domestic and public life. Gaignard exposes the means by which Black, white, and multiracial identity is either made legible or invisible. She brings contrasting scenes from these vintage issues into contact with each other and with a modern audience, creating new, witty interpretations, at times darkly humorous but always uncanny. 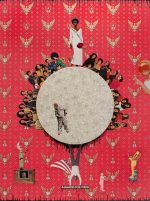 Genevieve Gaignard,
A Walk In The Park Is A Shot In The Dark, 2019. Courtesy of the artist and Monique Meloche Gallery, Chicago

In deromanticizing white Americana and bridging the imagined gap between private politics, popular culture, and institutional oppression, Gaignard employs familiar imagery: objects and photographs which for some may seem initially innocuous. But this is exactly the point. In creating the installation, Gaignard said, “For me, the interesting part is hearing viewers respond and say, ‘That’s like my grandma’s house,’ or ‘I had this object when I was a kid,’ but it’s my hope that, with closer inspection, the viewer realizes just how inappropriate or charged these objects are.”

“I’ve gone to people’s houses that have the mammy dolls, and they think it’s cute and nostalgic because it was passed down to them. They think it’s okay because it’s familiar, and they grew up around it. When making this work, I’m almost pointing a finger at the viewers to say, ‘Is this you?’”

In the installation, symbolically modeled after the home of an abuser, Gaignard imagines a domestic environment which figuratively evokes an intergenerational cycle of patriarchal and racial dominance, over both a gendered, racialized individual and American public life. The 1970s wallpaper design depicts a slave family looking on towards a steamboat and upper-class white family. As Gaignard repeatedly shows us, the past isn’t past. The domestic sphere becomes a site for reenacting the histories of domination and perpetuating them into oblivion.

“It’s literally written on the walls. The antebellum-themed wallpaper is surrounded by red walls,” she said. “It’s saying stop, there is something to unpack here. I’m screaming at you. I’m thinking about red as blood, red as republican, red as fear, red as love, red as a rose. It’s all of these things. It’s torture. It’s passion.” 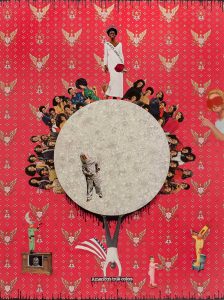