The artists reconstruct the idea of home in their Fondazione Prada exhibition ”Whether Line.”

Many urban dwellers often dream of leaving the bustling cities where they reside for a quieter existence. When artists Ryan Trecartin and Lizzie Fitch decamped from Los Angeles to rural Athens, Ohio, they welcomed the idea of getting back in touch with both nature and their roots—Fitch was born in Ohio and grew up in Oberlin, and Trecartin moved around the state as a child. They moved their practice to Athens, a small university town with a population of 25,000, where they created their own world, consisting of sets constructed on a hill—and their neighbors weren’t too pleased with it. But that didn’t stop the duo from shooting a series of films for their current exhibition at Fondazione Prada in Milan, Whether Line, which is on view until August 5.

The exhibition’s curator, Eva Fabbris, took Document on a tour through the three sculptural theaters. She led me through a path lined by a series of stanchions, the kind that guide you to the front of airport or security lines. That brought us to a narrow tunnel made up of a curved chain-link fence, with Fitch’s voice playing over speakers in a sound piece. “They thought it would have been a reconstruction of their own relationship with nature, getting rid of a lot of obligation, and experiences that are forcing every individual to follow a specific path, and that’s why here we are, closed into this corridor,” said Fabbris. “We are caged. They speak of a jail-like experience that they wanted to put us in.”

Next, we arrive at the first theater, where viewers are invited to sit on rocking chairs to watch one of Trecartin’s films, complete with his signature kooky characters and hyperfast voices. Titled Plot Front, the hour-and-forty-five-minute video features a protagonist he plays that he calls Neighborgirl. “He’s the one who discovered that, basically, even if you go to live outside the city in the countryside, you’ll have some issue in self-defining,” explained Fabbris. “Your identity in comparison to what your neighbor would think of your presence, because that’s what actually happened to them. They moved there, but their neighbor was so shocked by their presence, that he was fighting them. They were collecting signatures against what [Trecartin and Fitch]  were doing because they were massively changing the landscape, using a machine, construction. They built not only a house, but a watch tower.”

I realize that I’m standing on a floor made from roofing material, and that the interior walls of the house are made of siding usually reserved for the exterior of a home. “The house we are entering is a reconstruction of one of the sets that they built on this hill with our support,” said Fabbris. “All the elements are repurposing an American country house, but inside out.” There’s even a recreation of the watch tower that Trecartin and Fitch created on that hill in Athens, that visitors can climb.

In the final theater, a video that Fitch and Trecartin made in collaboration with Rhett LaRue, called Property Bath, takes viewers through all four seasons in Athens, Ohio. Neighborgirl gives viewers an idea of the nature that surrounds them there, as well as a look at the blue home in which the artists live, and the houses they constructed around it for the exhibition. As we exit the inside-out home, which is located inside the “Torre,” a year-old exhibition tower designed by Rem Koolhaas’s Office of Metropolitan Architecture, I look back at the house’s wood-framed exterior and think about the idea of “home,” and how Trecartin and Fitch translated the return to their own “home.” 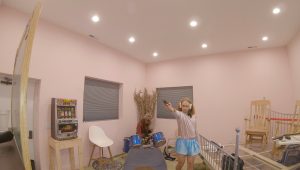 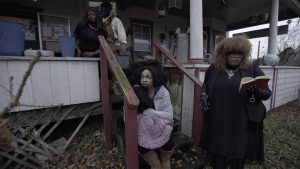