Do you ever wonder what happens when a raindrop descends from the clouds? Dutch designer Jólan van der Wiel took that very question and turned it into an art installation, titled Journey of a Raindrop, at Issey Miyake’s Milan flagship in Palazzo Reina in Montenapoleone, the city’s high-fashion district. When Issey Miyake tapped Van der Wiel for the collaboration, which launched this week during Salone del Mobile, they decided that water and air—elements that we depend on for our existence—would be the perfect materials for the project.

“They’re very diverse materials and can be shaped in many different ways, like textile,” said Van der Wiel. “I love the old story of The Journey a Raindrop because it’s an effective way to make a huge topic small and personal. Think about the life of a single drop. It’s traveling all over the world, meets many cultures, and many natural forces. Also, it meets friends, like other drops, and becomes one with them to turn into something else, like a river. We all need water. It can be beautiful but also devastating.”

Van der Wiel intervened with the store’s interiors—designed by architect and artist Tokujin Yoshioka, who used Moroso Brook poufs, Artemide lights, and Desalto tables for a minimal feel, serving as a nice contrast to the palazzo’s 19th-century period floors and fresco ceilings. In Van der Wiel’s three sculptures, water and air travel through a series of tubes. One resembles a pipe maze, another is a tunnel composed of dozens of tubes, and the last resembles the curves of a clef symbol.

“I wanted to create an effect as if water is flying through the Issey Miyake store in Milan, as if there is a different gravity field than usual,” said Van der Wiel. “To make this happen I developed a technique using transparent tubes, which carry less pressure. Then we have water and air going through the tubes. It’s one circluation per installation. Everything is connected. For the biggest installation, we used 500 meters of tubes. This is very little power needed to bring this line of water drops and air into circulation.”

Van der Wiel hopes that visitors will become more fascinated by water and air, and their purpose in our daily lives, while getting a moment of serenity during the hectic Milan Design Week.

“By giving one single drop a personality you will probably be fascinated by the drop and, after that, also the other drops,” explained Van der Wiel. “After seeing the installations you will go outside and meet your friends when it’s raining. And maybe you will feel more connected with them and the natural environment around us. So the drop is a way to tell the bigger story of a world in which we have much more respect for our natural origin and surrounding, and [in which] we start collaborating and integrating natural elements more and more into our daily lives.” 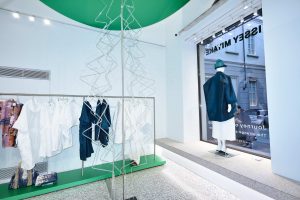