Marie Tomanova has emerged, not just figuratively, but literally as well. After months of being locked down in her East Village apartment this spring, the photographer made her way out of her home, venturing throughout her neighborhood. “It felt like we emerged from the end of the world—after being locked down for such a long time and then followed by the powerful energy of the BLM movement,” said Tomanova. “There was a lot to talk about with everybody I met this summer—sharing each other’s stories from quarantine and what it meant for our families, sharing grief about people we lost, talking about the protests and the unsettling energy of the current situation.” With her camera in hand Tomanova took to the streets, interacting with those she came across. “All my shoots were set up outside and centered about reconnecting and strolling through the neighbourhood,” said the Czech Republic-born photographer. For Tomanova, her summer afternoon walks in the East Village became a respite from the chaos that surrounded her. “These strolls through sunny afternoons were islands of hope for me, [people] providing mental support to each other, hoping together for a positive future,” she said. “It’s been a lot. A lot to cope with, to process, to embrace. So many different feelings, experiences and personal stories that got even more personal due to the escalated situation that we were all trying to get through.”

Like Nan Goldin, Wolfgang Tillmans, and Ryan McGinley before her, Marie Tomanova captures the spirit of youth culture now, arguably earning herself the title of the Nan Goldin, Wolfgang Tillmans, or Ryan McGinley of the Instagram generation. Although her photos are the opposite of the perfectly polished photos that are the platform’s status quo, they are filled with that same raw youthful energy that her predecessors managed to extract from their subjects. In fact, it was McGinley’s ethereal imagery that inspired Tomanova to test her own perspective behind the lens after she moved to the United States in 2011. She developed her own language, imbuing her experience as an outsider in a new country, and her genuine interest in youth culture, within the photos. Her largest solo exhibition, Live for the Weather, is on view at the Tschechisches Zentrum Berlin through November 14, as a part of the European Month of Photography. Tomanova recounted the stories behind a handful of photographs in the exhibition, to give context to the people in and the stories behind them. 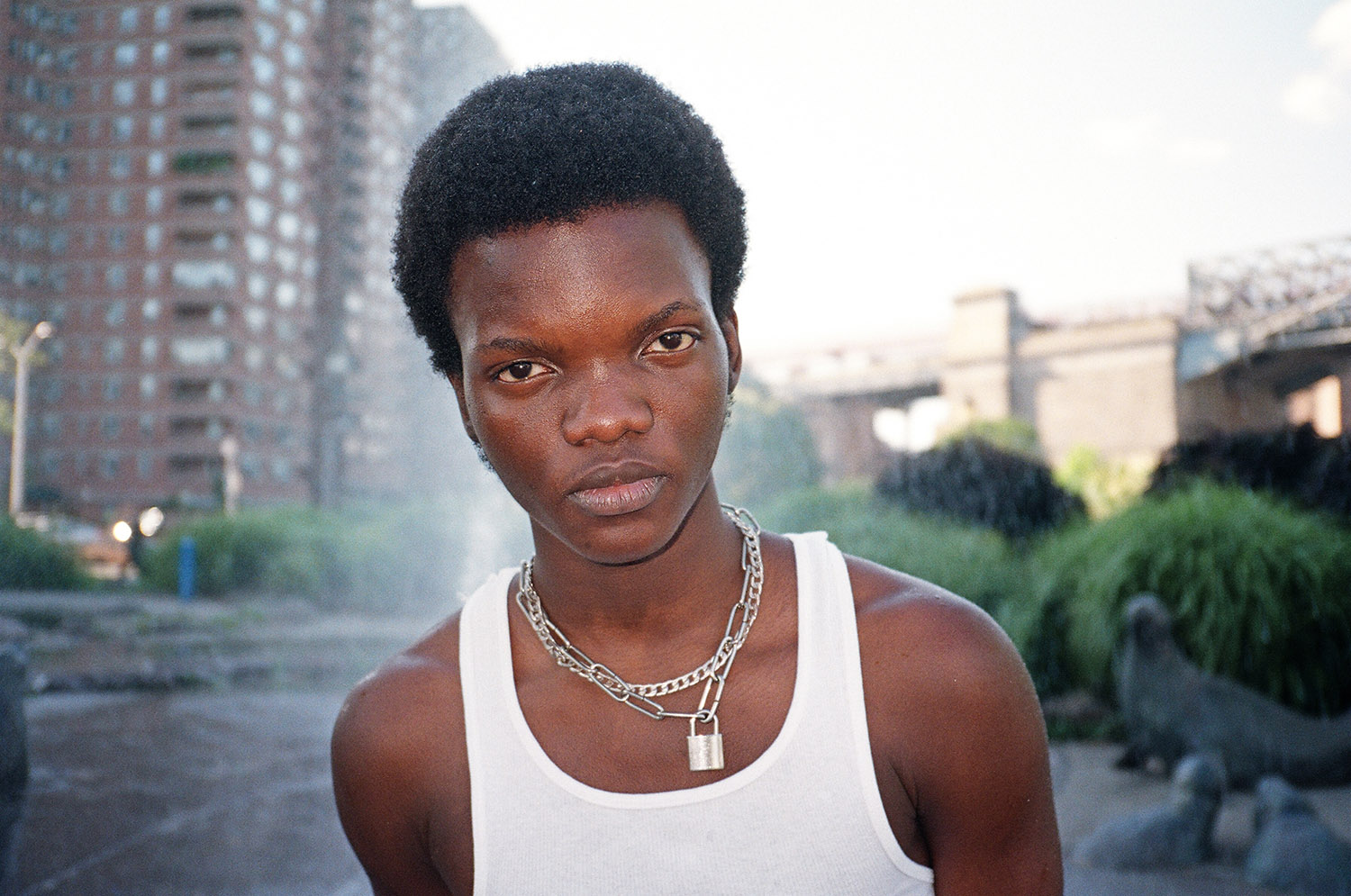 I met Aheem for the first time in 2019 when I was shooting backstage at Puppets and Puppets at New York Fashion Week. We haven’t seen each other for a while due to the pandemic but we set up a shoot in July by the East River. It was a beautiful hot summer day and we walked from Tompkins Square Park all the way to the river and under the bridges. It’s quite a walk and we joked about the fact that nor Aheem or me had such a long walk in months, as we were both quarantined in a small apartment in NYC since the spring. We talked a lot about Aheem’s school—he studies Psychology in a CUNY college in Brooklyn—and the uncertainty about the schools going online. But what touched me the most was to hear was Aheem’s dream—after he finishes his studies, he wants to go back to his home country, Nigeria, and bring his knowledge back home to provide for his community. As an immigrant in the US myself, I feel for that and deeply respect that. 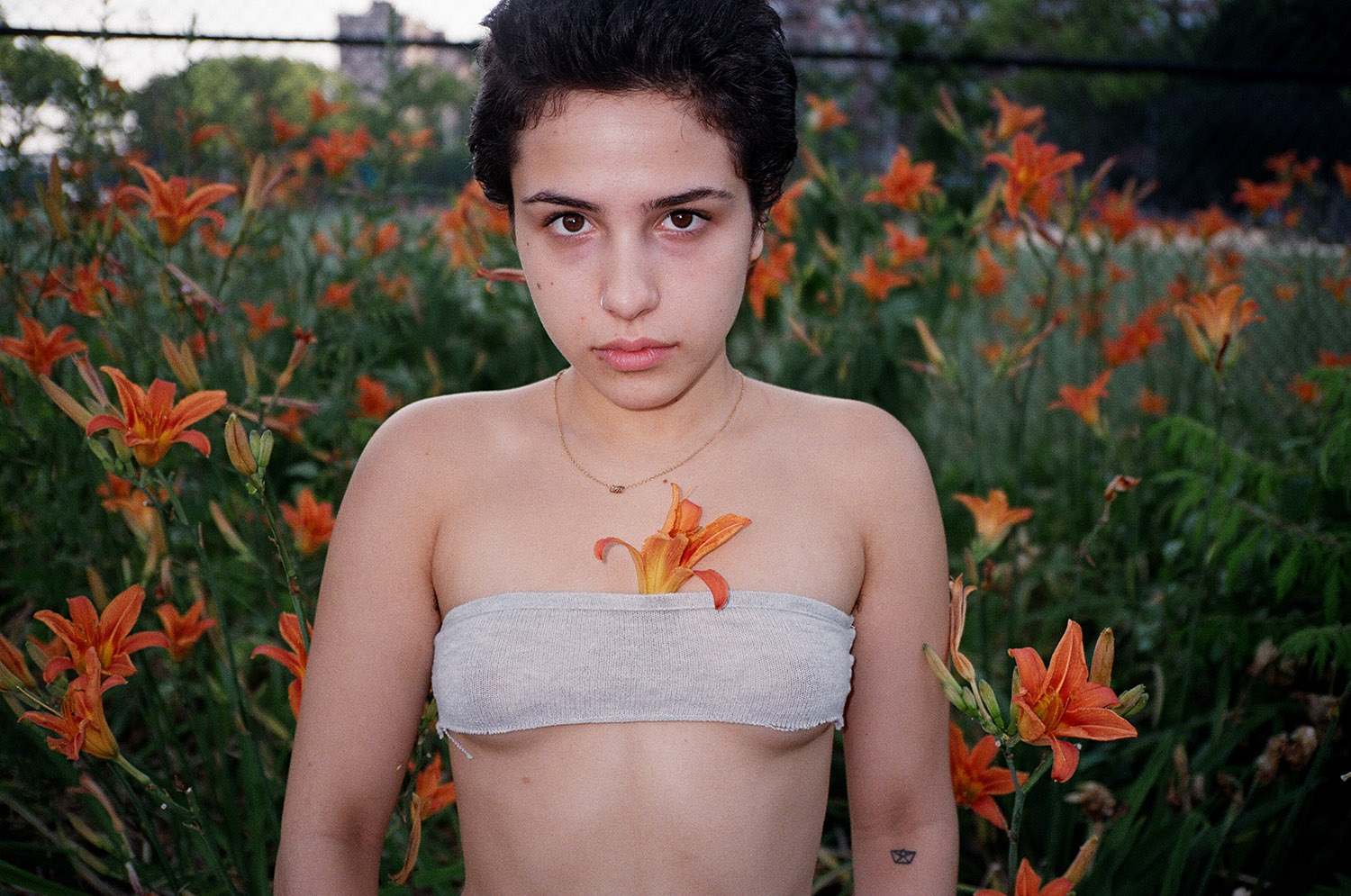 Isabel and I met at the Skate Day event at Tompkins Square Park which was basically the first time I was out with my camera after the quarantine. I was so mesmerized by the youth energy present, with so many kids skating and having a good time there. It felt so amazing to feel the happiness in the air again! I took a photograph of Isabel there but we also agreed to shoot more. So we spent an afternoon by the East River a few days later and took this photograph in the flowers. It really is one of my most favorite images. I love Isabel and we have been close friends since. She is studying fashion at Parsons, skates, and does music—we collaborated on a video with Sam Centore for my collection launch in Japan and Isabel did fantastic music for it! And she just landed a role on HBO’s show Betty. She’s a powerful force with such pure energy. 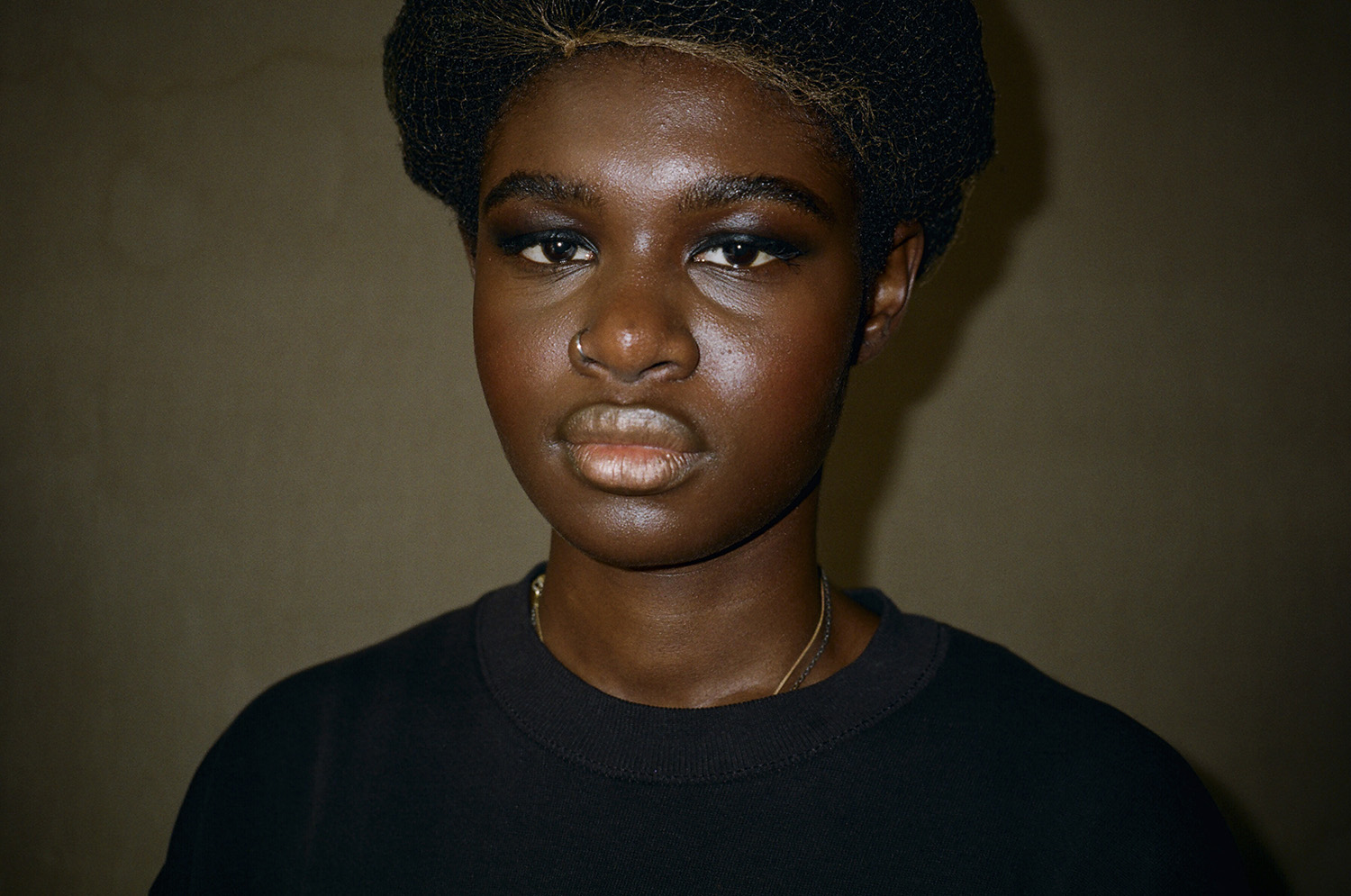 Coumba and I connected at Lou Dallas’s show at New York Fashion Week in 2019. I was shooting backstage and it was a multiple show in a row that week. It really becomes a blur at times [shooting] during fashion shows but Coumba had such great grounding energy that it was calming and I remember it very vividly. When she was in between makeup and hair, we went aside from all the action and took a couple portraits. This is my favorite one. 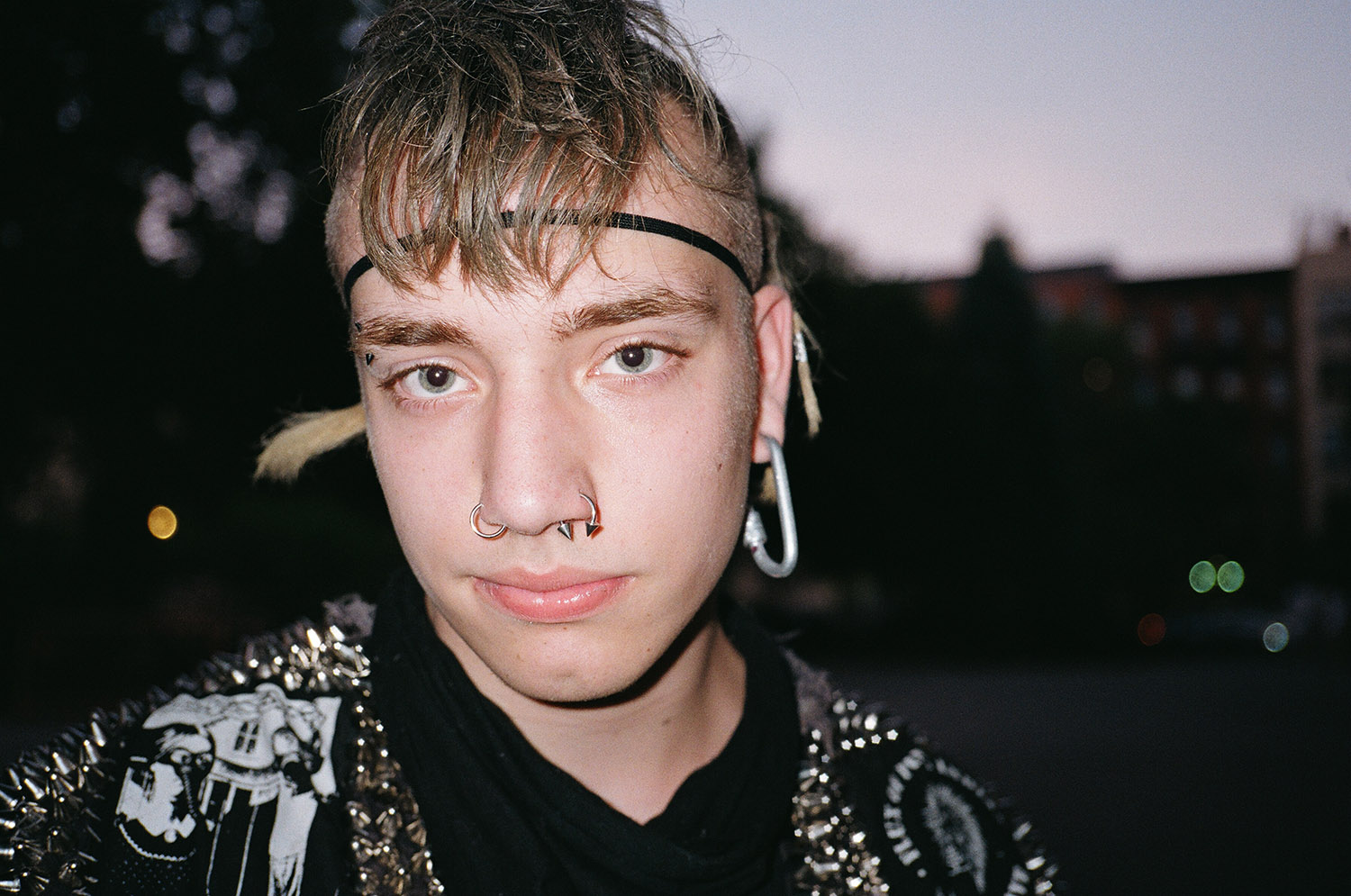 I took this photo in Tompkins Square Park on a summer evening and it was part of a series of photos I took of a group of people. There was so much going on around and yet I was really set at ease by the beautiful calming presence of this person who was there with a group of good friends. Somehow, I didn’t get his name and that makes me sad because the name is such an important part of the portrait. That doesn’t happen often, but sometimes the connection and focus is just so there… I am still looking and I hope someone will let me know his name. A photo for me is not finished, really, until that is a part of it. 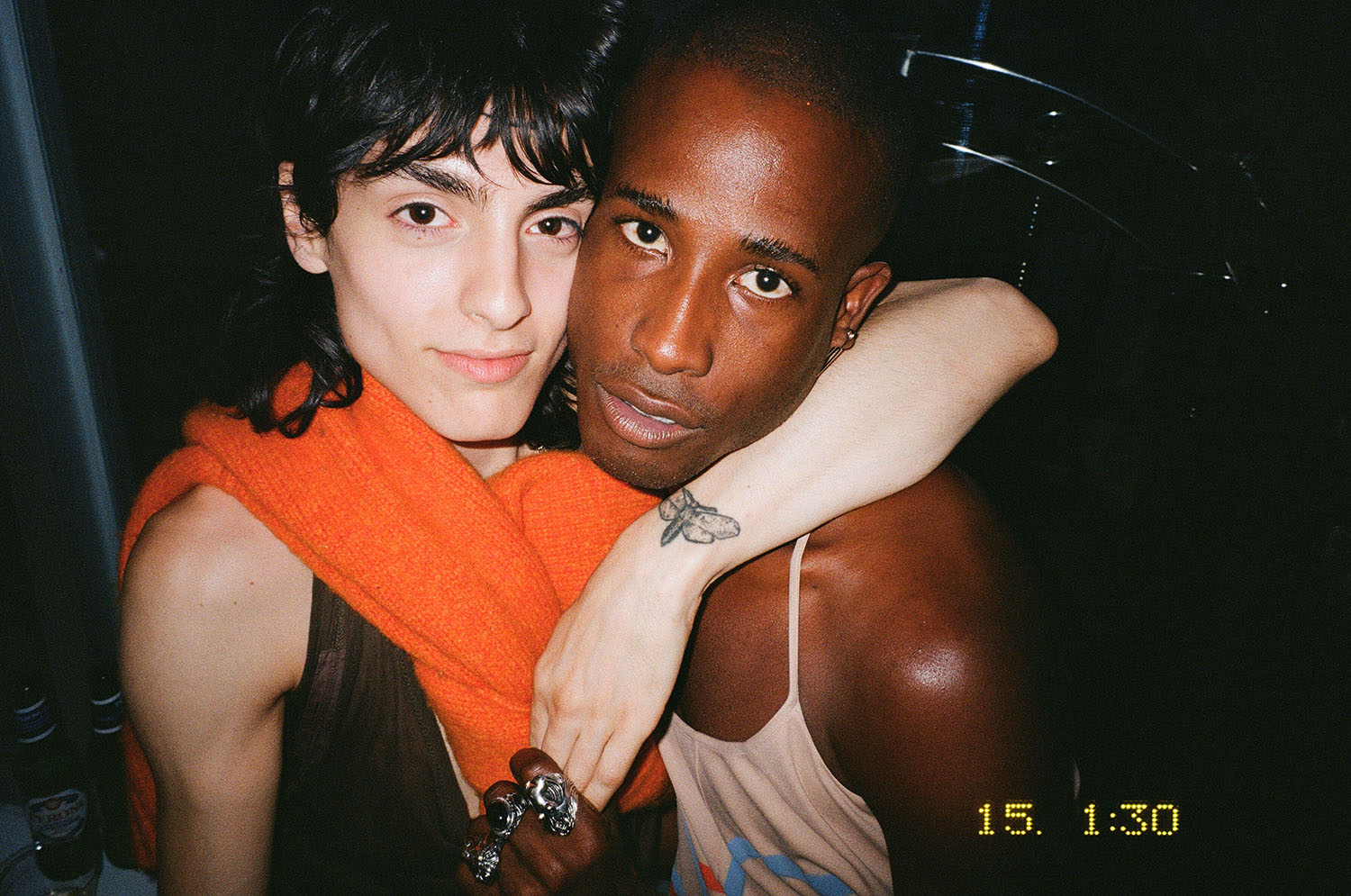 It was a big opening night in some exhibition space on the Lower East Side. There was the whole downtown New York City scene hanging inside and outside, the crowd was overflowing and really sweet. It was before corona and everybody was so carefree and happy. You saw people running into friends, hugging, dancing, smiling, kissing… The perfect summer night in Lower Manhattan. And that’s when I met Maxima and Cory and sat with them on the windowsill and chatted. We shared the wonderful energy of the evening together and I snapped this photo of them before I disappeared into the crowd again. 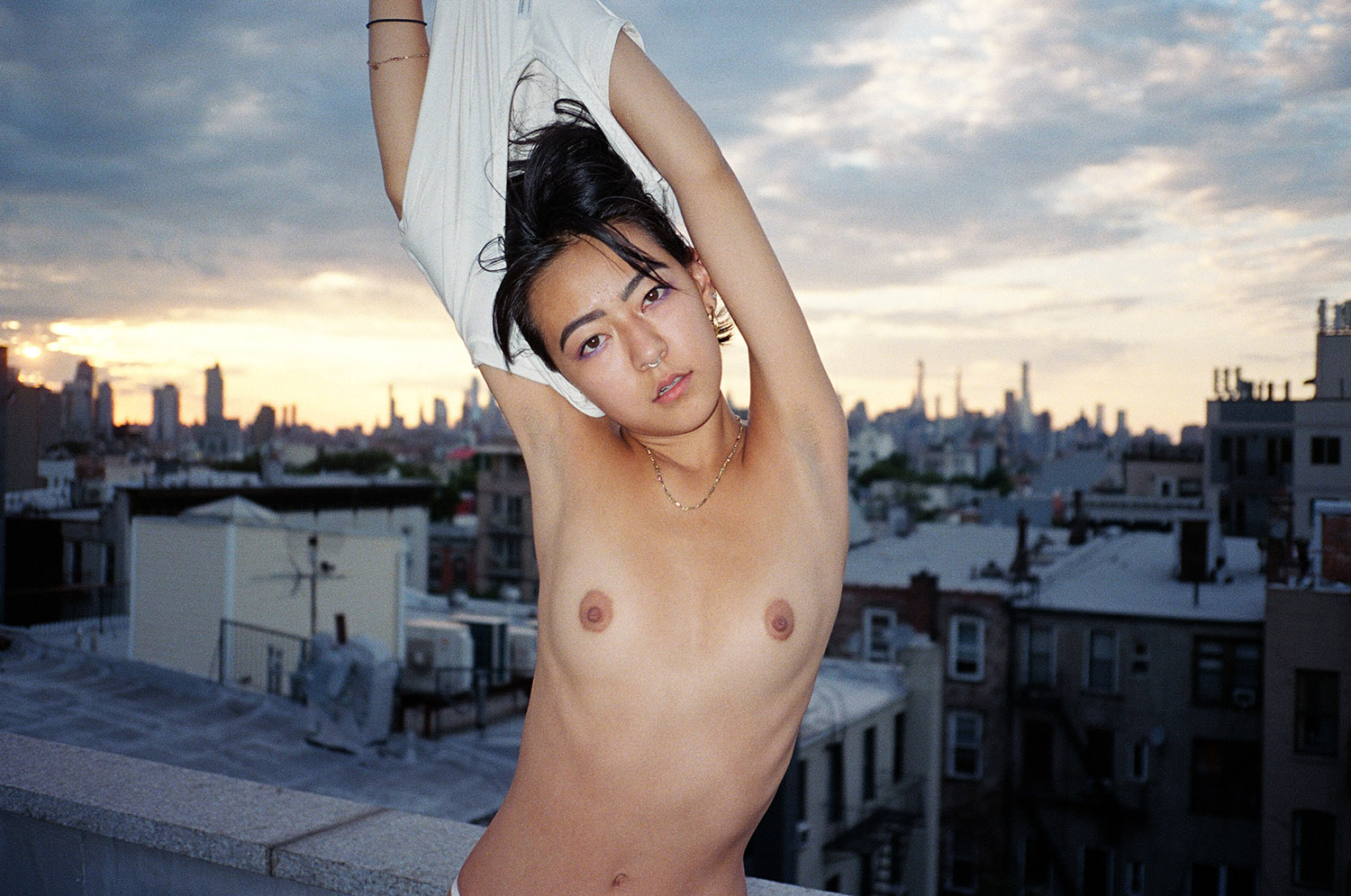 I secretly admired Ayana’s style since the first time I stepped into Mogador for brunch and saw her working there. Her fashion look was always so spot on but nonchalant and very chic. It took me a while to actually ask her if she would want to take portraits with me. So we met as soon as pandemic allowed and we shot on her rooftop in Brooklyn. We sat on the roof, smoked cigarettes, and chatted about childhood, emigrating from the East to the US, and how it was to end up one day in a country where you didn’t even speak the language. Ayana was born in Kyrgyzstan and grew up mainly with her grandmother as her mom emigrated to the US to set a better future for them. One day, many years later, Ayana came to join her and grew up in Sheepshead Bay after that. We shot a lot of images that day and so many of them are my favorites. So we printed this one really big as it embodies the feeling of freedom for me. Freedom after months of quarantine. Freedom of this city that we both came to love where only the sky is the limit. 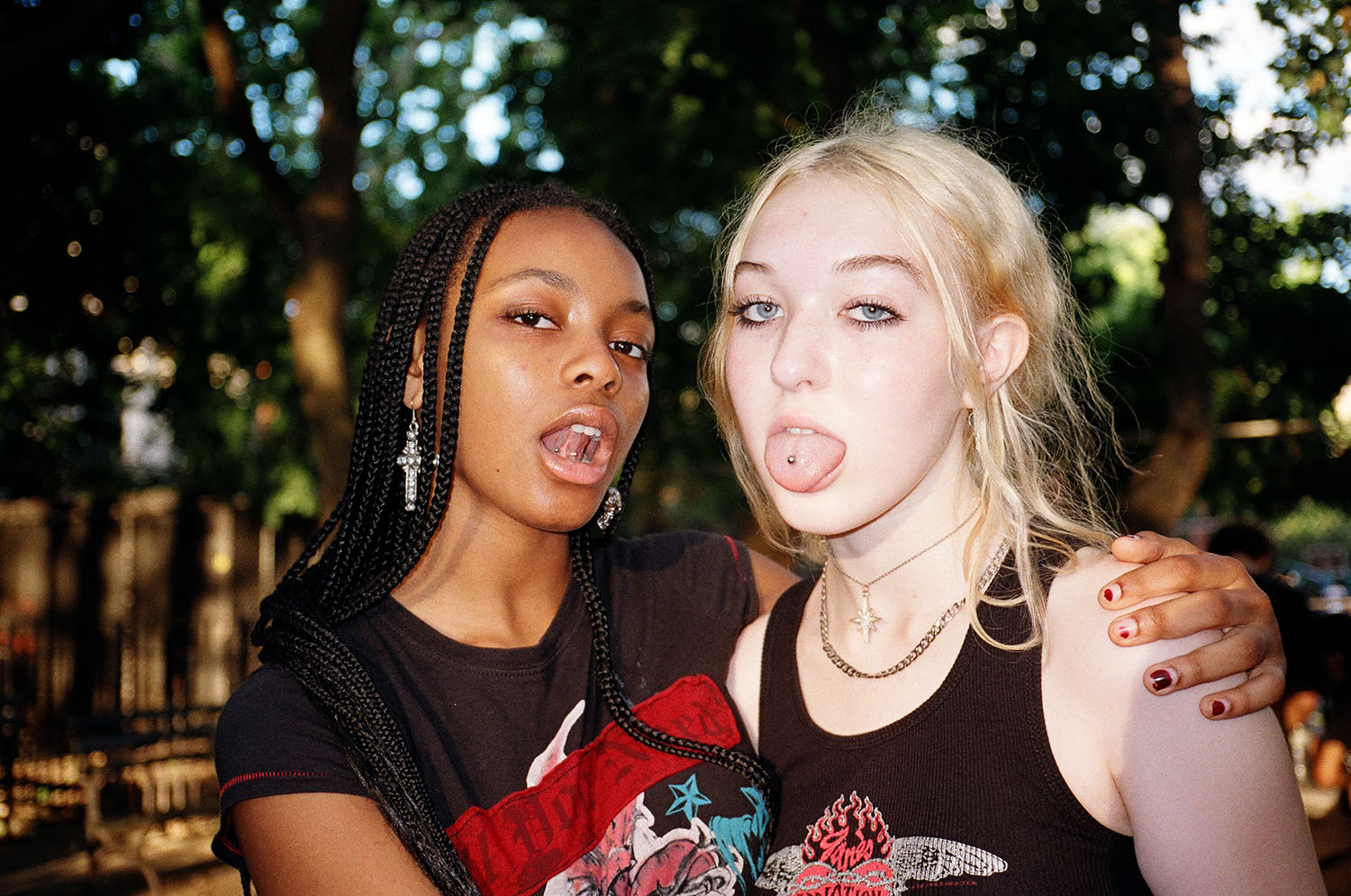 I have never spent so much time around Tompkins Square Park as I did this summer. Not being able to travel and with the park just around the corner from our apartment, it became a spot to hang out not just for me, but also for all the local kids. Makenna and Doe were spending lots of their days with friends on the benches of the inner circle of the park as I was with Thomas and Kiernan. So I saw them many times before I actually talked to them and took this picture. For me, photos from that day really embody the whole summer mood. It was a beautiful golden light, the kids [seemed] tossed out of the Kids movie and it felt like old New York. There were no tourists this summer, no international students, no outsiders. Just the local kids from all five boroughs, meeting in Tompkins Square Park to skate, to dance, to laugh, to be. To simply be. It was inspiring to see the youngest generation of New York City shenanigans trying to make the best of their summer regardless of everything that was going on, and it became the title image of my current exhibition Live for the Weather, which is on view at the Tschechisches Zentrum in Berlin. 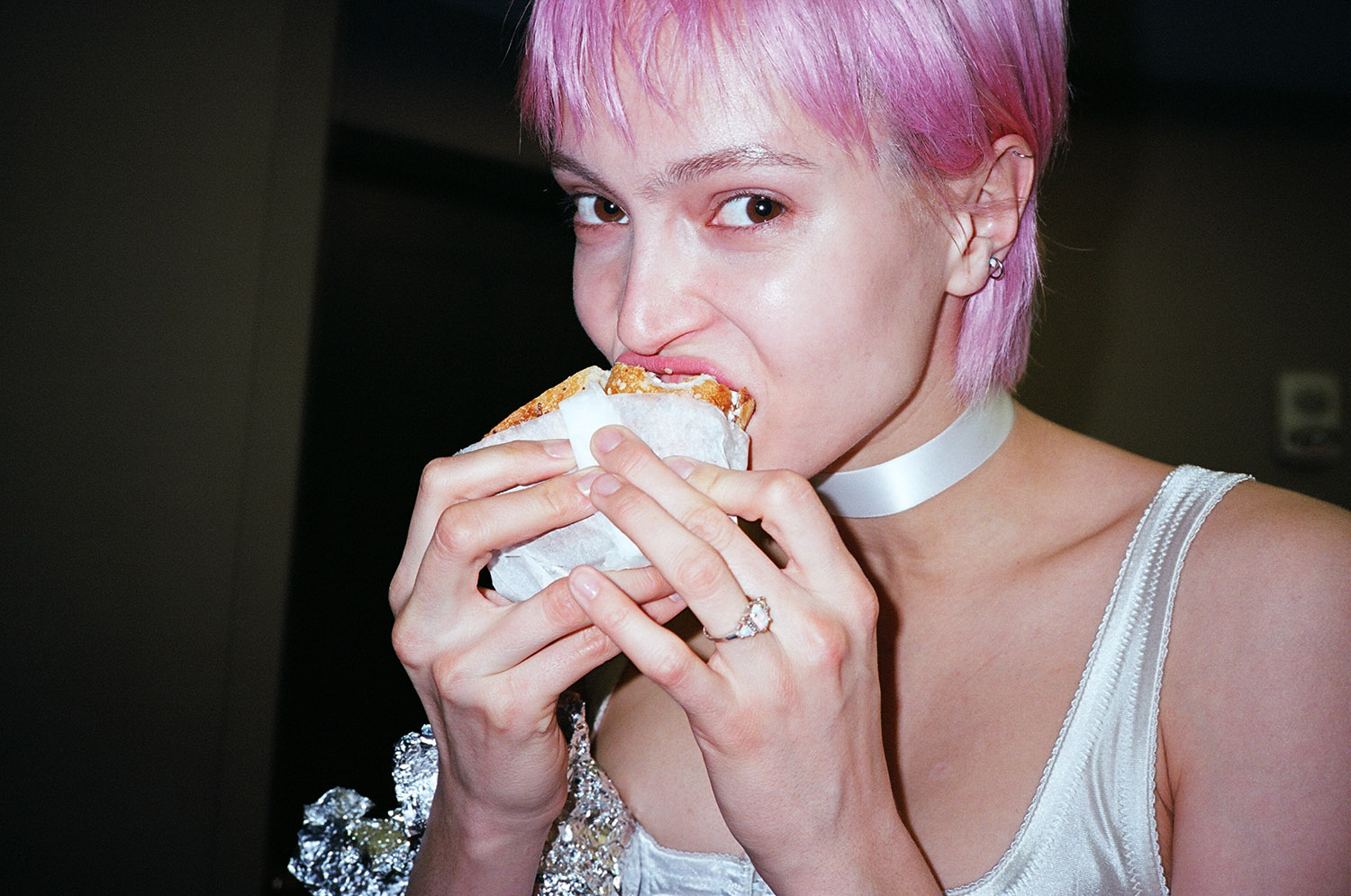 I just love this image for what it means. Kate snacking right before her and Odie’s wedding at the City Hall in New York City. It was so precious for me to be able to photograph Kate and Odie’s relationship throughout the time from the first shoot in the bathtub that we did at the beginning of their relationship all the way to their wedding day. I have so many amazing photos of those two that I joke I will be able to do a book just on them soon! And I actually think it will really happen [one day] as Kate and Odie are my forever muses and inspirations!