The Berlin born-and-raised photographer, who studied at the Kunsthochschule Berlin-Weißensee in the 60s, began working for the East German women’s magazine Sibylle (coincidentally her name) in the 70s and, along with her husband Arno Fischer, became the center of a community of artists, designers, and photographers living in the German Democratic Republic. In 1990, the year of Germany’s reunification, she co-founded Ostkreuz, an agency which now represents a score of photographers.

On view is a mixture of Bergemann’s fashion photographs and documentary projects. Images of stylish women in the streets of East Berlin, as if scenes from everyday life, reveal unexpected details.  A young woman, Birgit, sits on a bench in an oversized houndstooth jacket, one hand clothed in a glove and the other wrapped in a chain. Another photograph features a model amongst tropical potted plants and a neoclassical sculpture. The  images seem as fresh today as they were decades ago.

The  images seem as fresh today as they were decades ago.

Another suite of photographs by Bergemann officially record the making and installation of the Marx-Engels monument to Communism by sculptor Ludwig Engelhardt from the mid-70s to the mid-80s. The images were eventually published with poems by Heiner Müller after the fall of the Berlin wall in the 1990 book A Spectre is Leaving Europe, a reference to the first line in Marx and Engel’s Communist Manifesto, “A spectre is haunting Europe.” In the most widely circulated photograph, reproduced here, the statue hangs by a rope, as if being removed from the post-communist city. There’s no question that Bergemann has finally arrived. 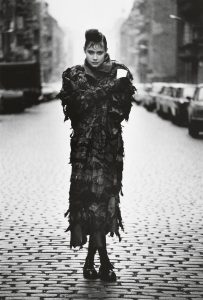 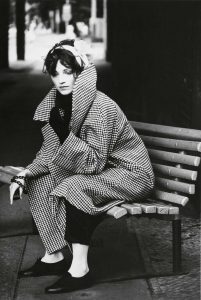 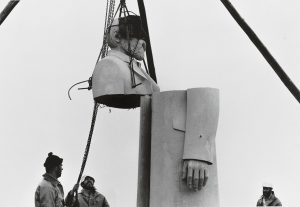 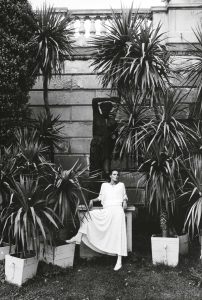 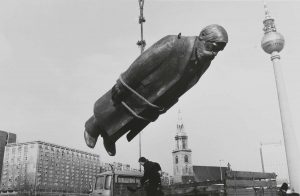