The world's top pollinator is under serious threat. Chef Jen Monroe tells us how we can lessen our impact her ethereal, bee-themed dinner.

Chef Jen Monroe has been thinking about honey bees for a long time. So when Caroline Maxwell, the artistic director behind Wild Dogs International, approached her about collaborating on The Salon, “an intimate series that explores environmental concerns through a cross-disciplinary lens,” she immediately jumped at the chance to conceptualize a menu. Her goal was to bring awareness to the role of honey bees in the food chain and the current crisis surrounding them.

“It’s such a complicated and misunderstood thing, and it has everything to do with what we eat,” said Monroe. “A lot of people don’t really understand the extent to which that is true.”

Did you know that a pound of honey is the result of 55,000 miles of flight? Or that their sense of smell is 40 times more effective than that of humans? Or that they pollinate $20 billion worth of food in the United States annually? According to Greenpeace, honey bees perform 80 percent of pollination around the globe. In fact, 70 of the top 100 food crops—which account for 90 percent of the world’s nutrition sources—are pollinated by bees. Although honey bees, which were brought to North America from Europe, are not going to be extinct anytime soon, their numbers are drastically decreasing due to a variety of factors—primarily pesticides, air pollution, drought, habitat destruction, nutrition deficit, and global warming.

“Honey bees are an incredibly important pollinator to a lot of the foods that we enjoy, like things that give a lot of spark to the table like watermelon, and other fruits and vegetables,” said Noah Macey, a programs fellow at the Yale Sustainable Food Program. “Honey bee populations are plummeting,” added Monroe. “So beekeepers have to be constantly re-breeding, knowing that about half of them are going to die off every year. And it’s not sustainable.” 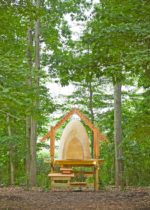 Monroe and Maxwell have been working since January to produce Balling the Queen, an intimate dinner hosted by Kit Luckey and Charles Hickox on August 17 and 18 at their small-scale vegetable farm Farm River Farm in East Haven, Connecticut. Maxwell tapped artist Terence Koh to create a site-specific wood beehive installation in the middle of the wooded area surrounding the farmhouse. “He took four years off and moved to the Catskills, and became really interested in bees, zen Buddhism, [as well as] rituals and what they mean,” explained Maxwell. Maxwell also recruited Chairlift’s Caroline Polachek to create a haunting soundscape for the experience. Maxwell wanted to see how an artist, musician, and chef look at the honey bee crisis.

“Food became an interesting starting point for this salon series because it’s this ultimate meeting ground,” said Maxwell. “It doesn’t matter if you have a PhD from Yale or if you’re working on the farm here, you have this central point of food. From there we can utilize the menu as a jumping off point to talk about these larger ecological and social issues that are happening around the consumption of food, and if we look beyond that, the consumption of media and of experience.”

Around 30 guests from different walks of life gathered at Farm River Farm on August 18 to partake in the ethereal dinner, where colorful flower arrangements by Fleurotica, beeswax candles, and cherries dipped in beeswax decorated the tables. “If a bee ate human food, this is a menu that bees would be would love to eat,” said Monroe, who started the dinner off with a beef tallow candle flavored with urfa biber, garlic, and herbs that dinner guests could dip their bread into. Monroe wanted to demonstrate the link between bees and livestock—bees often pollinate the crops which they consume. Other dishes included a salad comprised of an herb and flower lavash, walnut onion crema, radishes, and cheese, as well as a panna cotta made with rose, flora, and bee pollen. “Many of the flowers that we feature are really important for bee foraging like really important sources of bee nutrition,” said Monroe.

Guests walked away from the evening with their appetites satiated, enlightening conversation, and a further awareness of bees. “At the end of the day, my core intentions are for people to have a deeper relationship, and appreciation and respect for nature,” said Maxwell. 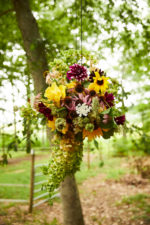 How can you contribute to alleviating the current bee crisis? Here are Monroe’s tips:

Minimize or even better, eliminate the use of pesticides and fungicides.
“Lawn pesticide runoff is actually even more of a significant damage with an agricultural runoff in terms of affecting bee populations,” said Monroe.

Make meadows, not lawns.
“Thinking that a lawn should look like a golf course is a little bit misguided, and instead, one could mow their lawn less and give more room for wild flowers and different kinds of grasses to grow and give bees different foraging options,” said the chef.

If you live in an urban area, do not keep honey bees.
“For people who live in places like I do in New York City, trying to add more honey bees to the equation constrains already limited resources,” she said.

Put a bee brick or bee hotel on your lawn.
“A really great way to help native pollinators: there are these things called bee bricks or bee hotels that you can put on your lawn and they’re just a really easy way of getting nesting space for different bees and also make your garden look great,” she said.

Eat a variety of foods.
“Mono cropping has really limiting effects on the American diet. And the product is convenience culture. It just kind of feeds the mono cropping agenda, and if you’re only focusing on a couple of small little limited crops that come from really large farms, it continues to damage ecological systems,” said Monroe. “I would encourage people to just diversify their diet as much as they can, eat food that is closest to them, and shop at farmer’s markets. Keep it local. Keep it small farm.” 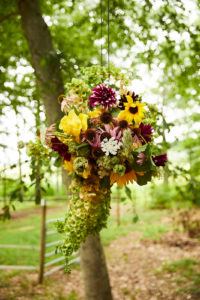 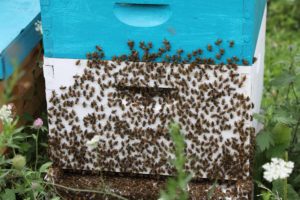 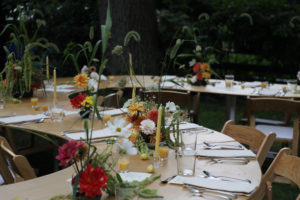 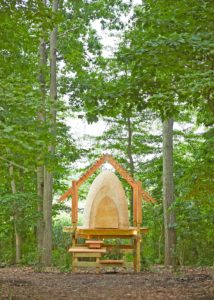