In documenting storm-battered coastlines, the photographer raises vital questions about which communities suffer in the face of predictable environmental catastrophes

In the belly of the Deep South, at the height of hurricane season, a new storm rages forward before the last one has finished making its way through. Virginia Hanusik, a Louisiana-based photographer, knows the phenomenon well. She’s devoted her work to photographing the South, with a distinct focus on how coastline communities are affected by flooding and natural disaster, events she recognizes as man-made. When tornadoes and hurricanes strike, we know when flooding will follow, exactly who will be most affected by it, and ultimately, what infrastructure will give in first.

Wary of disaster photos that fetishize damage, and the tendency to describe those in harm’s way as “resilient,” Hanusik seeks to humanize natural disaster. She is “interested in the ways the built environment symbolizes what we value.” In focusing on the built environment, we come to question why disaster must function as the necessary wakeup call to catalyze steps toward environmental justice. The idea that progress must be preceded by disaster and unavoidable victims is flawed.

We might think of architecture as authoring space, and disaster as a construct that suggests suffering is normal. In their book Critical Disaster Studies, Andy Horowitz and Jacob Remes explain that, “Disasters take place over time… Making sense of political and ideological contests demands seeing people in context.” They discuss the misleading nature of disasters, particularly in how they’re presented to us. “People commonly imagine disasters to be unexpected and sudden. Thus, seeing a problem as a disaster can make structural conditions appear contingent, widespread conditions appear local, and chronic conditions appear acute.”

Policymakers turn their backs when it best suits them, making disaster management reactionary, never precautionary. Communities battered and weathered with each passing storm are applauded for their commitment to their homes, when the reality is that for many, the practicality of picking up and going somewhere else is simply unthinkable. 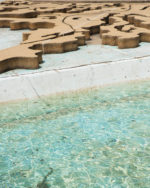 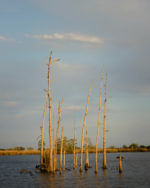 Hanusik’s photographs local to Louisiana show persistence. They depict changing landscapes that time and time again leave the most vulnerable—low-income households, including those of ethnic minorities and tenants who don’t have the security of homeowner insurance on their side—at the frontlines of disaster. Batture houses, nestled in marshy alluvial land between low-tide and the levee, are makeshift, patchworked buildings, adapting with the land itself and repaired with each passing hurricane. In that sense, the batture houses are of the land, choked by cypress trees and viewed through Hanusik’s lens in thick, Southern sunlight. In the Parishes of Louisiana, architecture is illustrative of rising sea levels: Stilted homes dot the coastline, forever moving upwards as flooded water comes in and out. On Tide Water Road in Venice, Louisiana, thin but sturdy bare tree trunks act as visual markers for a rising tide.

Environmental change doesn’t happen all at once. Nearly a hundred years ago, the 1927 Mississippi Flood droned on from Cairo, Illinois to New Orleans before draining into the Gulf of Mexico. It was a broad, slow moving disaster, the most destructive flood in all of American history, not limited to a single place, and displacing people over many months. Hanusik returns to the site, reminding us of the ecological refugees of the disaster—in particular, the approximately 20 thousand African American people who were forcibly moved to tent camps and made to work on levees by the Red Cross along with white contractors. 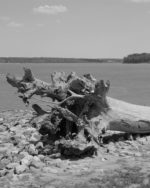 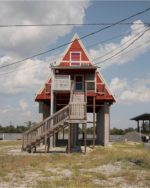 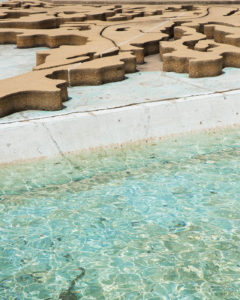 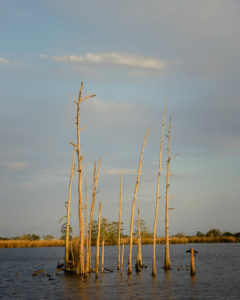 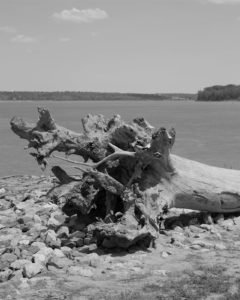 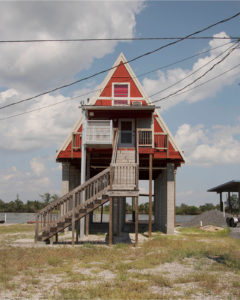