Madame de Pompadour’s foreboding epigram, “Après nous, le déluge” (“After us, the flood”), has become eerily sinister in light of climate change. The excesses of Western modernism rival that of the court of Louis XIV—only this time the vast accumulation of wealth and wastefulness are rapidly decimating not just the peasantry but the planet and the very life it supports.

The United States may desperately need a wall—but the last place it should be located is inland, along the desert keeping asylum seekers out. In a June 2019 report, the Center for Climate Integrity predicted the nation needs to build seawalls along 50,000 coastal miles across 22 states by the year 2040 to stave off the impact of rising sea levels. Estimated to cost $400 billion in total, Florida, the most at-risk state, faces costs of $76 billion alone.

After eight years of climate denial led by former Gov. Rick Scott, who reportedly banned the terms “climate change” and “global warming” in state agencies, Florida is in desperate straits. In November 2019, the city of Miami joined Miami Beach in declaring a climate change emergency, asking Washington and Tallahassee to match the $192 million the city has set aside for projects like anti-tidal valves, urban reservoirs, king tide monitoring, and other climate mitigation projects. 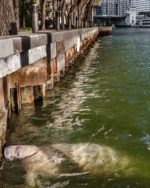 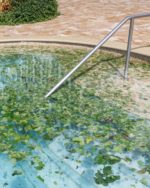 Positioning himself as himself as a green Republican, current Gov. DeSantis awarded $685 million (of the $91.1 billion state budget) in 2019 to environmental restoration, removed anti-environmental members of the board of the South Florida Water Management District, appointed the state’s first Chief Science Officer to address environmental concerns, and renewed a Florida Crystals lease for land slated to become an Everglades restoration reservoir.

All things considered, it’s a drop in the bucket and Generation Z refuses to wait. On January 9, Florida students age 12 to 21 filed a lawsuit against Gov. Ron DeSantis, Agriculture Commissioner Nikki Fried, the Florida Cabinet, and two state agencies for violating their constitutional rights and endangering their future by failing to aggressively develop a plan to combat climate change.

They are not alone. According to the first-ever Florida Climate Resilience Survey, published in October 2019, two thirds of Floridians do not feel the government is doing enough to address the impact of climate change. “There’s shared anxiety in the community—everybody knows, even the deniers know,” says photographer Anastasia Samoylova. “You can’t escape it. It’s hard to deny when you are standing in water. You can say whatever you want but the evidence is surrounding you.”

Hailing from Moscow, Samoylova moved to the United States at the age of 23 to pursue her MFA from Bradley University in Peoria, Illinois. After being on the academic track, she decided to move to Miami Beach in 2016 to resume her love of making art. Samoylova decided to walk the streets taking photographs as a way to gain a sense of place—something she could only do in the morning and in the evening during what was the hottest summer on record (though every passing year has claimed the title).

The following year, Hurricane Irma hit. “There was a mandatory evacuation but we couldn’t evacuate because there was no gas anywhere. People were stranded,” Samoylova recalls. “We live in an older condo building with lots of concrete so we thought we could wait it out. This was an experience of the real sublime. You feel so small in the face of the elements. The howling winds: that was the scariest part. I photographed during the hurricane while I could and then the aftermath. Miami Beach, usually packed with tourists, was a zombie city. It felt apocalyptic. That’s when I realized I had a project.”

Just six years old when the Soviet Union collapsed, Samoylova still remembers the impact of propaganda posters from her childhood, drawing a parallel to Florida’s image as a tropical paradise and the added devastation of losing one’s illusions on top of everything else. “There’s this promise of utopia and everything will be amazing—but that didn’t happen. When the Soviet Union collapsed it wasn’t only the reality that didn’t deliver, it was also this imaginary world that everybody believed in; images have a lot to do with that,” Samoylova says. 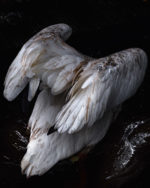 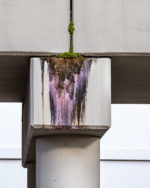 “These images that promise a more beautiful life create this false reality, this imagined geography of this place being solid and well-constructed, and we now know it is built on swamp land and porous limestone. There’s no foundation to South Florida and many other southern states. In Miami Beach, a city saturated with images of its own perfection, you start wondering: what is being hidden? It’s not going to be the millionaires who will suffer. It will be people who won’t be able to relocate quickly. Then you wonder whether those facts are not being disclosed [because] it will cost the government to relocate those people eventually.”

In the interim, delusion persists. “I live across from the Deauville Hotel where the Beatles recorded The Ed Sullivan show in 1964. The NADA art fair used to take place there. That was the last time I saw the interior. The next year, Hurricane Irma hit. For three years, the hotel has been abandoned. The damages were so severe they couldn’t recoup the loss. It had 600 rooms and fed into the neighborhood economy,” Samoylova says.

“Across from the hotel, there is a parking lot-sized lawn built on concrete. I call it the ‘Beatles Lawn.’ It’s in the same flood zone as the hotel and it was just sold for $40 million. It was the last undeveloped green patch in Miami Beach.”

“Anastasia Samoylova: Floodzone” is on view at the USF Contemporary Art Museum through March 7, 2020. 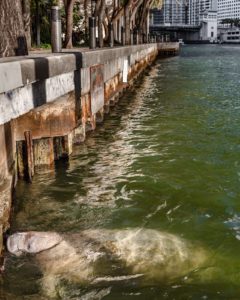 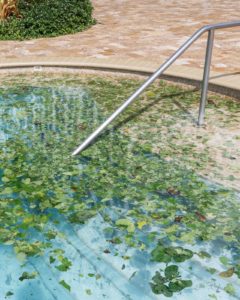 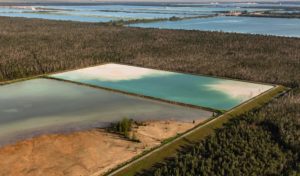 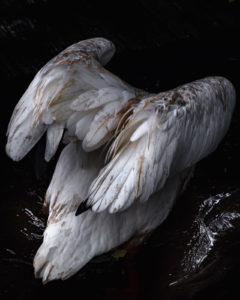 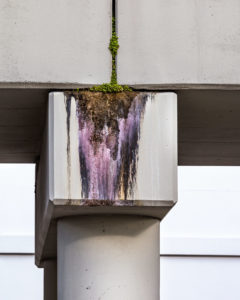