Photographer Laurence Ellis traveled to the Loreto region of the Amazon rainforest to explore indigenous knowledge and evolving ecological practices. The environmental portfolio captures the people who are on the front lines, fighting for their lands, their forests, and our futures.

“There still feels like there is an imperialistic attitude when it comes to climate change, countries in the global north—the G7 for example—coming up with solutions or imposing views on how the rest of the planet should act when it comes to the environment. Many people don’t properly understand the value of indigenous knowledge or the hugely important role these communities play in the preservation and safeguarding of our planet,” explained Ellis. “We essentially have no hope without them.”

An extended edition of Ellis’s environmental portfolio, accompanied by the following essay by Daegan Miller, will appear in Document’s Fall/Winter 2019 issue.

Sustainability. The World Bank is for it. So is ExxonMobil. Farms, from massive, corporate monocultures to tiny, off-the-grid permaculture operations, all claim to be sustainable, as do the Green Party, the Republican Party, the Democratic Party, the Democratic Socialists of America, and the libertarian Cato Institute. You can buy sustainable coffee, cocktails, sex toys, coffins, diapers, smart phones, Doc Martens, toilet paper, Tupperware, Rolexes, and luxury electric sports cars. Or you can follow sustainability’s Left-branching path to an eco-village, to vegetarian or vegan cuisine, to a protest with black-clad anarchists. I’m betting that, whoever you are, you’re for sustainability, too.

It’s tempting to conclude that “sustainability” is whatever anyone wants it to be, but that’s not quite right. Ideas have histories. It’s important to get them right. The stakes are high. As I write this short history, the Amazon is burning at a nearly unprecedented rate: something like 76,000 fires—most of them caused by humans in pursuit of profit—have sparked between January and August 2019 in the Brazilian rain forest alone. National Geographic reported that an area the size of New Jersey has been reduced to ash. The world is focused on these Amazon fires right now, but shortly before, at the beginning of August, we watched in horror as hundreds of thousands of Arctic acres also went up in smoke. Of course, all that smoke from all those fires contained hundreds of megatons of CO2, a greenhouse gas, which can be absorbed by trees, but not when they’re burning. The Amazon has often been called the lungs of the world, but in 2019, the earth is looking like an emphysemic smoking two packs a day. The cure, as nearly every article, op-ed, or think piece will mention, is to transition to something more sustainable, but what exactly that means remains hazy. 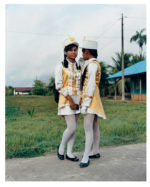 Students in uniform celebrating Fiestas
Patrias, Peruvian
Independence Day, standing on a newly built track of road in Cushillo Cocha, Peru. Many locals welcome the construction of roads like this as they can promote economic development by
connecting rural markets.

One way to begin the history of sustainability is in the West during the last three decades of the 20th century. It was an era of heightened environmental and economic concern: The oil crisis of 1973 had shown Americans just how tenuous their chief energy supply was, while stagflation was gutting most Americans’ paychecks. Fifteen years later, the U.N.’s Intergovernmental Panel on Climate Change was formed, NASA Goddard climate scientist James Hansen was riveting Congress with his research into climate change, and journalist Bill McKibben was putting the final touches on The End of Nature, the first book on global warming aimed at a general audience. By the end of the 20th century, it no longer seemed that wildlife conservation and land preservation could deflect the economic and environmental costs of modern life.

At the same time, critics from India, Africa, South America, and Asia were pointing out that Western success meant the rest of the world’s impoverishment. Nor was the traditional Western environmentalist focus on saving wildlife much help, either, because ecological reserves and parks often meant that tribal, subsistence, and indigenous populations were displaced, erased, or simply ignored. Instead, what was needed was a new way of thinking, one that combined ecological insight with an economics that worked for everyone, including the poor and non-Western. Some economists were paying attention, and in 1972, with the publication of The Club of Rome’s The Limits to Growth, economists finally took note of the ecological fact that nothing can grow infinitely. The Limits to Growth was the first piece, writes Ulrich Grober in Sustainability: A Cultural History, to use the term “sustainable” as an environmental value, and it, along with E.F. Schumacher’s 1973 classic, Small Is Beautiful: A Study of Economics as If People Mattered, heralded the rise of an economics that sought to scale itself modestly, more in line with earthly limits than fantasies of endless profit.

This all looked like the birth of something new, and at the U.N.’s 1992 Rio Earth Summit, the precursor to the Kyoto Protocol (1997) and the Paris Agreement (2016), the world seemed poised to transition to a more equitable, green model of economics. But then George H.W. Bush told attendees of the Summit, “The American way of life is not up for negotiations. Period.” And so Big Growth has remained America’s overriding goal, no matter which party has controlled the levers of government. 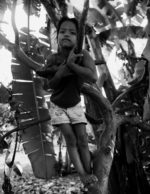 Maria, hanging off a tree in Bufeo Cocha.

By the late ’90s, a new wave of neoliberal confidence was sweeping American environmentalism, and an ensuing host of books, including, most famously, Thomas Friedman’s Hot, Flat, and Crowded: Why We Need a Green Revolution—and How It Can Renew America (2008), proclaimed that all talk of limits was small-minded. Instead, the answer to every environmental problem was more: more technology, more efficiency, more consumption, more power, more wealth. Ecological destruction was not a moral or ethical problem but an engineering one. This strain of thought has (so far) culminated in “An Ecomodernist Manifesto” (2015), which argues that the problem with modern economics, industry, and technology is not that they are out of step with ecological reality, but that they are not out of step enough. Instead, ecomodernists urge a complete “decoupling” of nature and society—ecological limits are just one more equation to be solved with the right mix of technological disruption and market innovation. We can invent machines to decarbonize the air, while nuclear fusion will provide limitless, free, non-polluting power forever. Bountiful, nutritious food will be grown hydroponically, or, in the case of meat, in a lab. And some day, soon, we’ll be able to colonize and terraform new worlds. The Garden of Eden can be ours, once more—we just have to let the engineers build it.

That’s one thumbnail history of sustainability. But the trouble with any history is that it is, in principle, uncertain, a reflection of its author and her values, of what he thinks belongs and what doesn’t, as much as of whatever past it is supposed to portray. It makes sense to begin the history of sustainability in the 1970s West (it wasn’t until after 1980, writes historian Jeremy L. Caradonna in Sustainability: A History, that an “explosion” of books with the words “sustainable” or “sustainability” in their titles occurred), but it’s also not difficult to see what we might call sustainable thinking percolating long before the Reagan era. Caradonna reaches back to the 17th- and 18th-century European and Japanese thinkers who began advocating for what we’d now call sustained-yield forestry practices in order to ensure each people’s naval might. Grober reaches even further back still, to Francis of Assisi’s Canticum Solis (1225), in which the future Catholic saint writes of the earth and everything on it as animate brothers, sisters, mothers, and fathers that sustain (sustentamento, Assisi wrote in Italian) all life, and to whom we are both responsible and accountable.

Yet another historical trajectory might locate the birth of sustainable thinking with Karl Marx, who, as sociologist John Bellamy Foster has shown, returned constantly to the way that capitalism, in its relentless pursuit of profit, disrupts the very material conditions of all life, and it’s possible to recast Marxism as a wide-ranging attempt to bring economics in line with the material reality of ecology. Meanwhile, Marx’s contemporary and sometimes comrade, Pierre-Joseph Proudhon, located the idea of usufruct at the very heart of What Is Property? (1840), the first anarchist manifesto. No one, Proudhon wrote, can own the soil’s fertility, the cleanliness of water, the purity of clear air: these things are given to all in common, and it is the responsibility of each one of us to make sure that we leave the earth as healthful, productive, and abundant as we found it—this is what usufruct means, and it is another way of articulating a sustainable ethic. 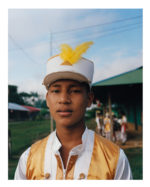 Road construction also indirectly contributes to  deforestation, which causes great damage to Amazonian ecosystems. The cultivation of coca is also closely linked to road development in the western Amazon.

But perhaps the best, longest, and most challenging history of sustainable thinking is to be found by moving beyond the confines of the Euro-American West, by looking aside the boundaries of modernity. When the Ecomodernists urge that humanity accelerate its decoupling, they’re drawing on only six centuries of Western thinking, which assumes that humans are separate from nature. This is a suicidally foolish, prepubescent train of thought from the perspective of many indigenous and non-Western societies. Vandana Shiva, an Indian scholar and activist, writes that there is no word, no concept native to India that mirrors the Western notion of a non-human nature. There’s nothing for humans to decouple from, and any sane economic or political or moral program would have to include the air and earth and water and all the little live things because these things are us; to endanger their existence is to render our own future precarious. Half an earth away, Potawatomi botanist and writer Robin Wall Kimmerer writes of gathering wild edibles and thanking them in her Braiding Sweetgrass: Indigenous Wisdom, Scientific Knowledge, and the Teaching of Plants. Each of us must rely on another being for sustenance, but there’s a way to do so with integrity:

Or head west to the Diné Nation in Arizona, and stand with Layli Long Soldier, one of the Native women who opposed the Dakota Access Pipeline at the Standing Rock Indian Reservation: “Tó éí íín ́ á,” she heard, repeated throughout the community—“water is life.” Think, for a moment, what that means; think what it would mean to act in the belief that water is life. Then spare a thought for the people collectively known as the San, in southern Africa, who kept their culture intact for…anthropologists aren’t quite sure how long, but it seems to be for more than 20,000 years, until they were displaced in the 1990s by a combination of the Central Kalahari Game Reserve and the interests of the Debswana Diamond Company.

This is the paradox of sustainability: no one is against it—“Our commitment to operating in a responsible and sustainable manner,” claims Debswana’s official website, “is at the heart of Debswana’s business strategy”—yet too often it also spells the loss of everything for someone.

Sustainability, then, is less an ethic than an aspiration, a vision of the future and a sense of the past. Sustainability tells us very little about the world in which each of us lives, but it reveals everything about the person who speaks its name: what, and who, makes for a good life? What, and who, is worth remembering? What, and who, will we allow to have a future?

For our tenth anniversary edition, we revisit a selection of stories from Document’s archive—celebrating a decade of championing the independent creative spirit, and honoring the cultural icons who will shape our future. This portfolio originally appeared in Document’s Fall/Winter 2019 issue. 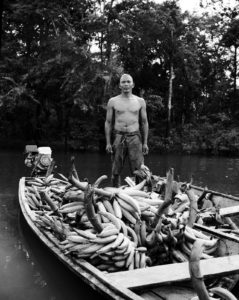 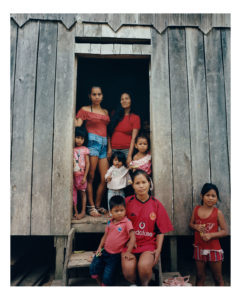 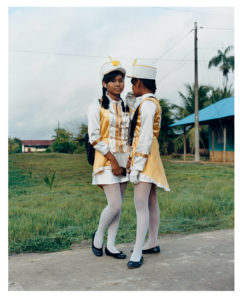 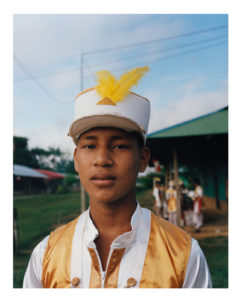 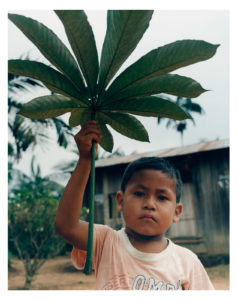 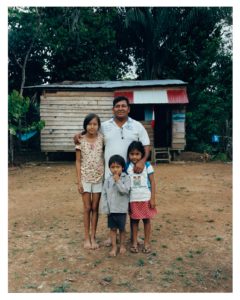 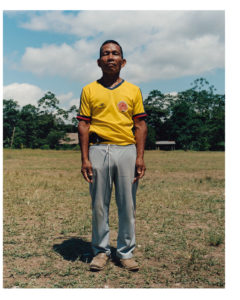 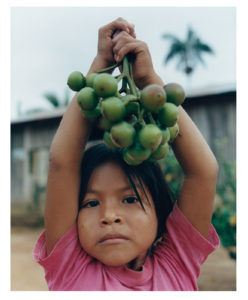 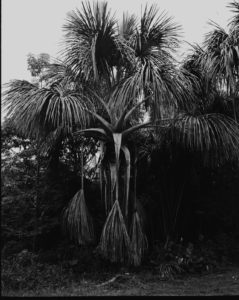 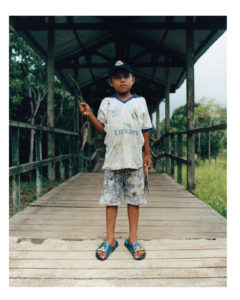 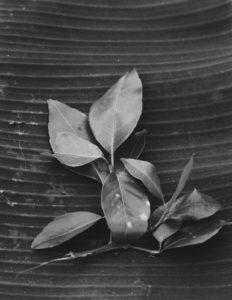 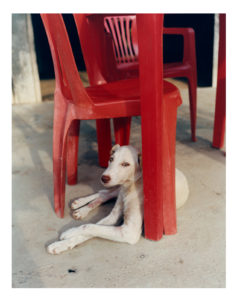 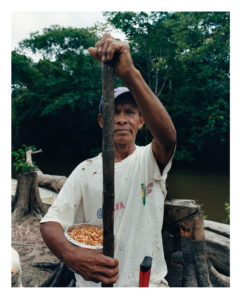 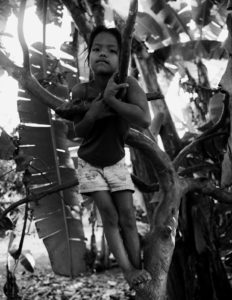 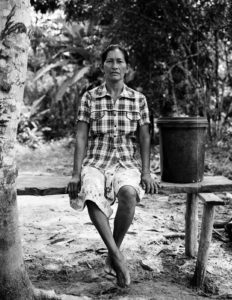 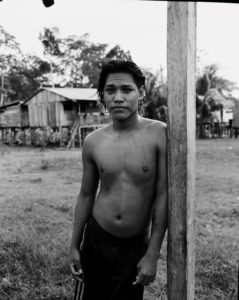 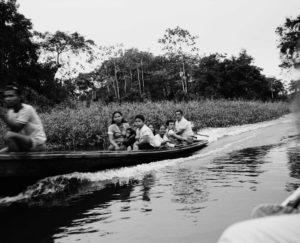