Linda Yablonsky—First of all, I want to congratulate you on the show at the Park Avenue Armory [“WS,” a take on Snow White, was up from June 19 to August 4, 2013]. That was really overwhelming and tremendously important. Was it painful for you to make?

Linda— Well, physically or emotionally. You’ve been exploring the darkest areas of the human psyche for a long time, yet you strike me as a kind of happy fella. How does that come together? What draws you there?

Paul— I think it’s always been there. It goes back a long way, to the ’60s, or even earlier then that. The images I drew in high school were all existential subjects, like isolated human beings with holes behind them. I focused on that kind of isolation. Going through the period of the ’60s, I remember being really interested in Allen Ginsberg, and “Howl,” and seeing art and thinking of art in terms of exposing an underbelly.

Linda—Were you an isolated child?

I had dyslexia, so institutions and schools were really difficult for me, especially during the ’50s. I was placed into a remedial program that was literally called the “Dumbballs”. The good part of it was that I spent a lot of time in art classes and I had very interesting art teachers. I didn’t really fit in, but on the other hand, I was quite sociable and accepted. I was a real clown.

Linda—What about your compelling interest in Disney and television?

Paul—There are a number of things about Disney. I was really fascinated by Disney when I was quite young. I also had an obsession with Switzerland when I was in high school. So my parents go to Disneyland in the ’50s, but I was so excited to see the Matterhorn. It was interesting seeing this fake mountain and buying into it and thinking it was real. It was this thing about the real and the fake and having an epiphany about the real and the fake when I was really young. I was also fairly interested in Heidi early on.

Linda— Because she is Swiss?

Paul— Yes, she’s Swiss, and she has this sort of innocence about her. It was all about the patriarch and the grandfather and the Alps. The whole thing about the Alps and cleanliness and hygiene was a focus for me. It was a realization and connection of hygiene and fascism and Western culture’s appropriation of Europe and my appropriation of Heidi, and Disney’s appropriation of Europe and the Matterhorn. So Heidi came first, then Pinocchio, then I was interested in Popeye and Olive Oyl, so these kinds of characters start popping up, and then Santa Claus.

Then the subject of Disneyland starting getting more and more interesting to me. To some degree, it happened with this piece called “Spaghetti Man” (1993) and “Apple Heads” (1997-1999). There were a lot of drawings I made at that time that were really connected to this certain perfect coy aesthetic of Disneyland. The “Garden” (the earlier one from 1991) had a lot to do with the theme rides in Disney.

Paul—No, it was a whole forest. There were different manifestations of it. One at the MOCA, and one at Jeffrey Deitch’s. It is quite a large forest. It is 30 feet by 40 or 50 feet.

Linda—So you’ve been working with these large dimensions for a long time. At the Armory, what were the dimensions? That wasn’t just a garden.

“I had dyslexia, so institutions and schools were really difficult for me, especially during the ’50s. I was placed into a remedial program that was literally called the “Dumbballs”.”

Paul—It was a forest that had this hyper-real gestation with large flowers and all this stuff above the ground and in the middle it has a line that’s a six-quarter scale version of the house in Salt Lake City that I grew up in, and then the other pieces were the interiors of that house. So the house, the forest and the interiors are sets, and it sits on Disney carpet. All the carpet was from the Disney hotel.

Linda—The reason I asked you about your attraction to the dark side is because in all of these films, you yourself are playing these characters that are funny and horrifying, and you’re using the house you grew up in. Is any of this autobiographical?

There’s that, but the way the house became my house is that I originally thought about making a house in the forest that was similar to a Disneyland dwarf house. The aspect that had always been part of the dwarf house was the series of rooms with basements going down underground. When I was working on the underground of the dwarf house, the basement took the same turns of the basement I grew up in. At one point, I realized I’m actually creating my own house, and I switched it, and abandoned the idea of the Disney dwarf house to recreate the house I grew up in.

In a lot of ways, the character of Snow White being reminiscent of my mother, it’s the life of Walt and White Snow together as a virtual couple in a postmodern period. That’s one narrative and series of vignettes, and then you have a narrative that’s based loosely on the Disney narrative or the Grimes Tale … that is, she wanders into the house, she cleans, and in this case, she shits and goes to sleep. The dwarves come in, they introduce themselves, then they go to sleep and then next morning they wake up and go to the mine. Then, it’s a series of parties. Eventually, White Snow drinks herself and dies out in the front of the house. Walt is carried to the basement and tortured by the dwarfs and all hell breaks loose in a certain way. Walt dies and White Snow dies. The Prince comes, and instead of kissing and awakening White Snow, he has sex with the representation of White Snow. So there were connections to both my parents and Adam and Eve and couples. All of it is around the subject of a ludicrous play on the pretend, and based on the culture of the pretend. People talk about WS as shock theater and how successful it is as shock. I didn’t think I was making shock. I don’t see it that way. It physically manifests very deep-seated emotions that we all try to control, and you let them loose, and that is the scary part.

Linda—Does Kate Moss represent anything to you? Can you describe your thought process behind the cover image of Kate Moss?

“People talk about White Snow as shock theater and how successful it is as shock. I didn’t think I was making shock. I don’t see it that way. It physically manifests very deep-seated emotions that we all try to control, and you let them loose, and that is the scary part.”

Paul—I made a series of drawings before White Snow and those drawings referenced pages from magazines like Vogue. I moved into working with these personalities, these women in these magazines, and what role these beautiful women play in the culture and our ideal of beauty. They all become a sort of White Snow or Snow White. So, there’s kind of a connection. We would like Kate Moss to be a sort of Snow White, but it’s a joke at the same time. It’s implying something that maybe isn’t there.

The Snow White hairdo is on both sides of her head in a very exaggerated way. She’s an exaggerated character. In the photograph, she’s wrapped in white fur,so you don’t see her body and it’s just her head sitting on this lump of white fur. I sort of drew the body. I just kept painting on it. Almost like a marker, drawing the figure over and over. In a way, I kept obliterating the drawings. There is a kind of figure in there.  The coloring is red and black, which is a reference to shit and blood, but it’s also the colors I love to use. The drawings are areflection of a state of mind. And the colors are ones I’ve been interested in since I was a teenager. It’s amazing how many coloring books are filled with black and red and white.

Linda—Do you have any interest in the fashion world, which is another fantasy world like Disneyland?

Paul—I played around with it at different times.  There is a certain absurdity and there is no escaping it. Whether it’s Kate Moss or me, or Walt Disney, we are all implicated in the spectacle of the western culture. Sometimes, the artist doesn’t have the answer and doesn’t come to a completion. I often find myself having trouble completing the answer. I operate with a certain intuition. 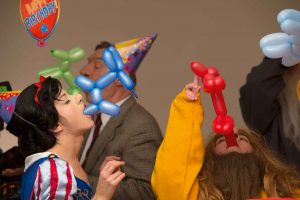 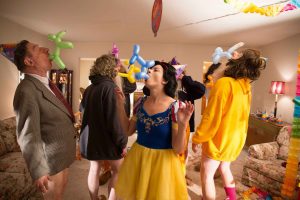 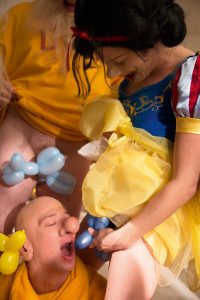 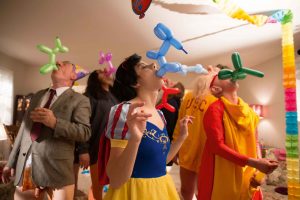 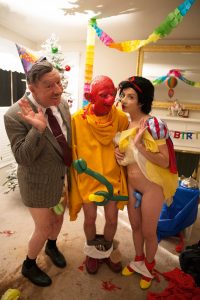 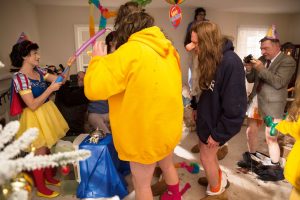 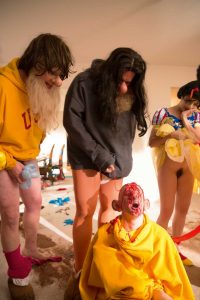