For our Spring/Summer 2020 issue, a close look at the artist’s annotated preparatory collages for his colorful late sculpture

“I cannot tell you what exactly happened,” said Donald Judd expert Marianne Stockebrand in a 2013 interview. She was speaking about the genesis of the artist’s so-called “multicolored works,” a radical 1984 departure from his minimal, one- or two-colored sculptures. Of course, she knew Judd was inspired by a piece he came across during a show of his work at Zurich’s Annemarie Verna Galerie in 1983. And, of course, she knew of his intimate familiarity with color theory. Yet even this former director of Judd’s Chinati Foundation acknowledged that there was something  inexplicable in the artist’s leap from minimal to maximal.

Few postwar American artists are more iconic than Judd, whose minimalist sculptures (a description he would have detested), though inimitable, have profoundly influenced subsequent generations. Works such as his plywood boxes and milled aluminum-and-plexiglass “stacks” set a high bar for future artists with their precision and rigor. The installations in his New York City home and at a group of buildings in rural Marfa, Texas, have created new possibilities for the presentation of artists’ work, whether by institutions or by the artists themselves.

Judd, the artist’s retrospective at MoMA, through January 2021, includes a number of his riotously colorful late sculpture and introduces a body of work that was primarily sold and exhibited in Europe to an American audience. Also known as “Swiss boxes” for the country where the first examples were fabricated, they strike out in an entirely distinct direction. Whereas much of Judd’s work in industrial materials was mono or dichrome, the Swiss boxes encompass dozens of hues, conjuring the image of an unsolved Rubik’s Cube, but with the intricate detail of a watch made by a Swiss horologist.

This portfolio encompasses eight preparatory collages—a few from dozens in the archives—for such works. Using samples from Germany’s RAL color chart, which enumerates colors for industry and commerce, Judd plotted out possible combinations, with the shape of the chips evoking the rectangular shapes of the series’s components. The chips often include the colors’ numeric codes and their German names (3018 Erdbeerrot for strawberry red, 5018 Türkisblau for turquoise) and Judd’s handwritten notes. One of these notations gives an indication of Judd’s legendary specificity: A circle containing two horizontal lines depicts the head of a screw, accompanied by the words “screws horizontal.” The combination of this conceptual precision with the touch of the artist’s hand, absent in the finished works, lends these collages a deep appeal. 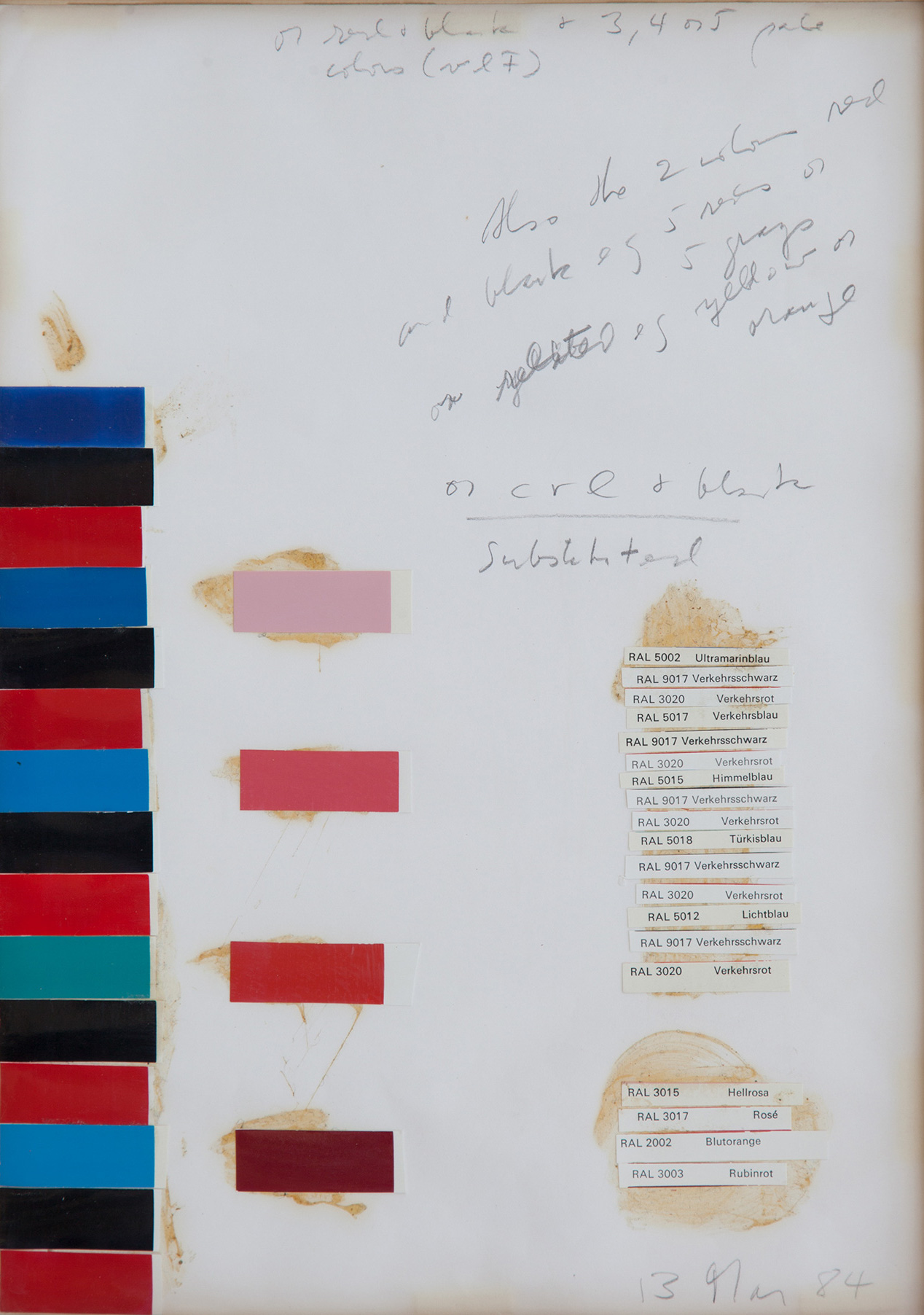 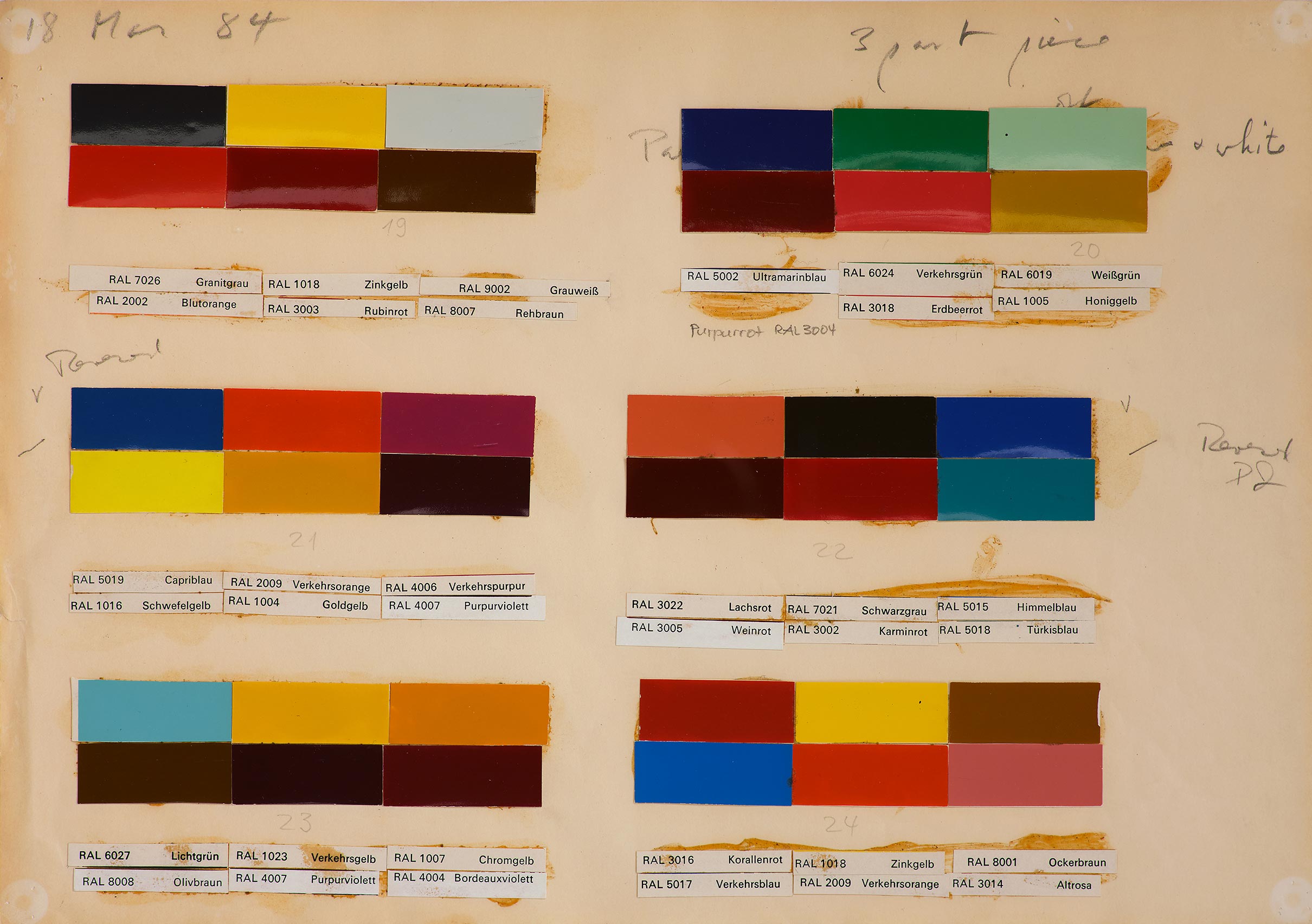 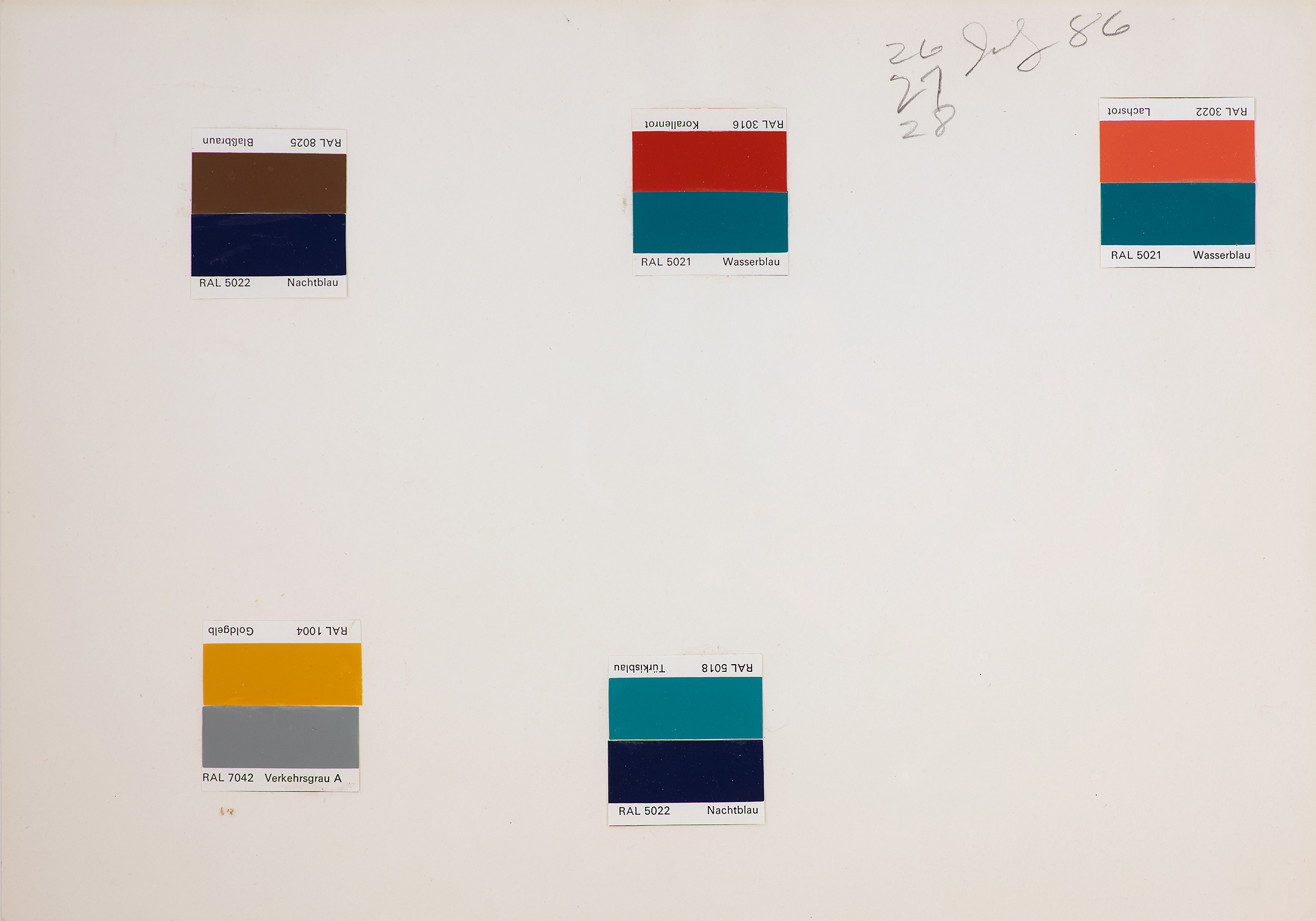 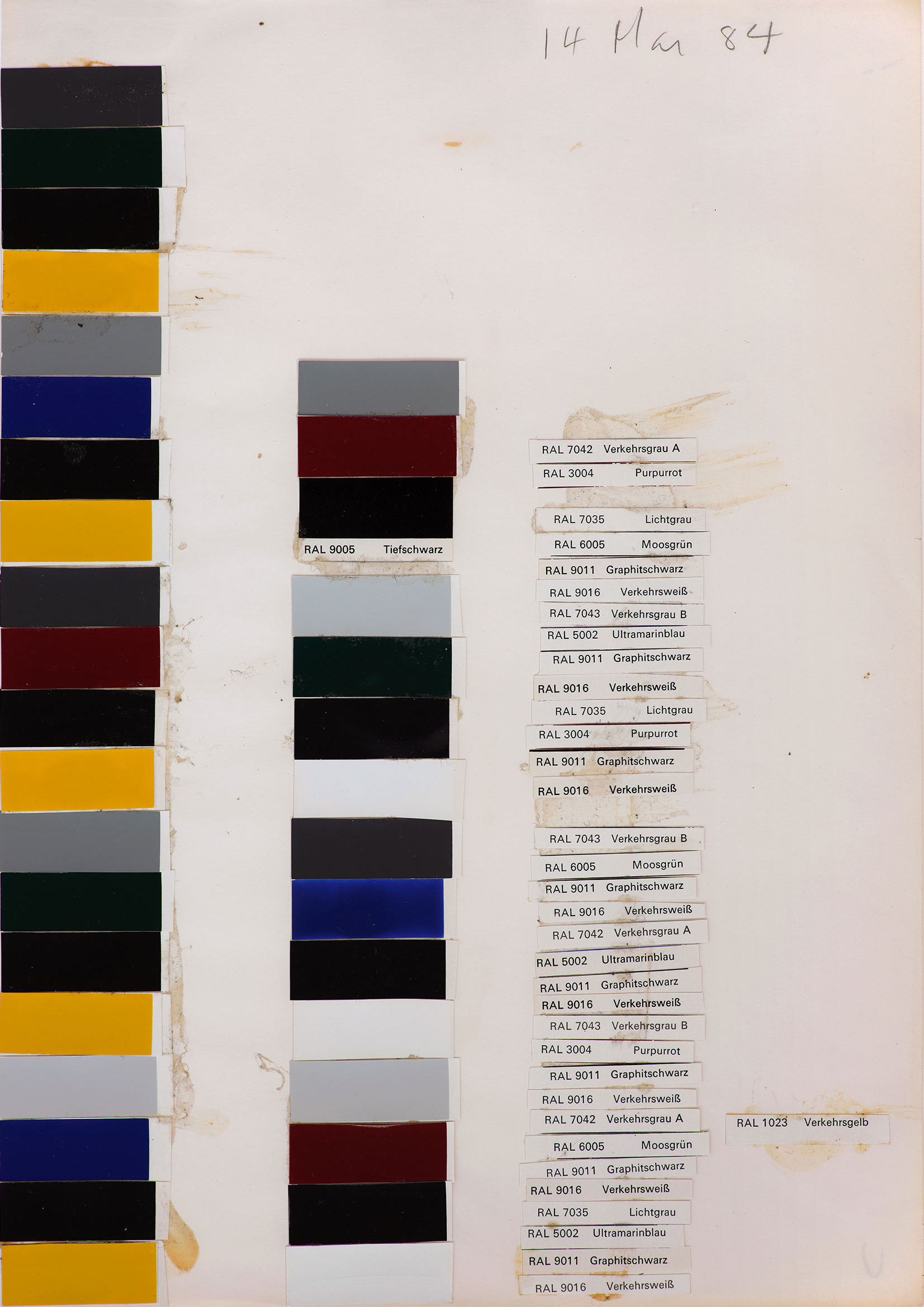 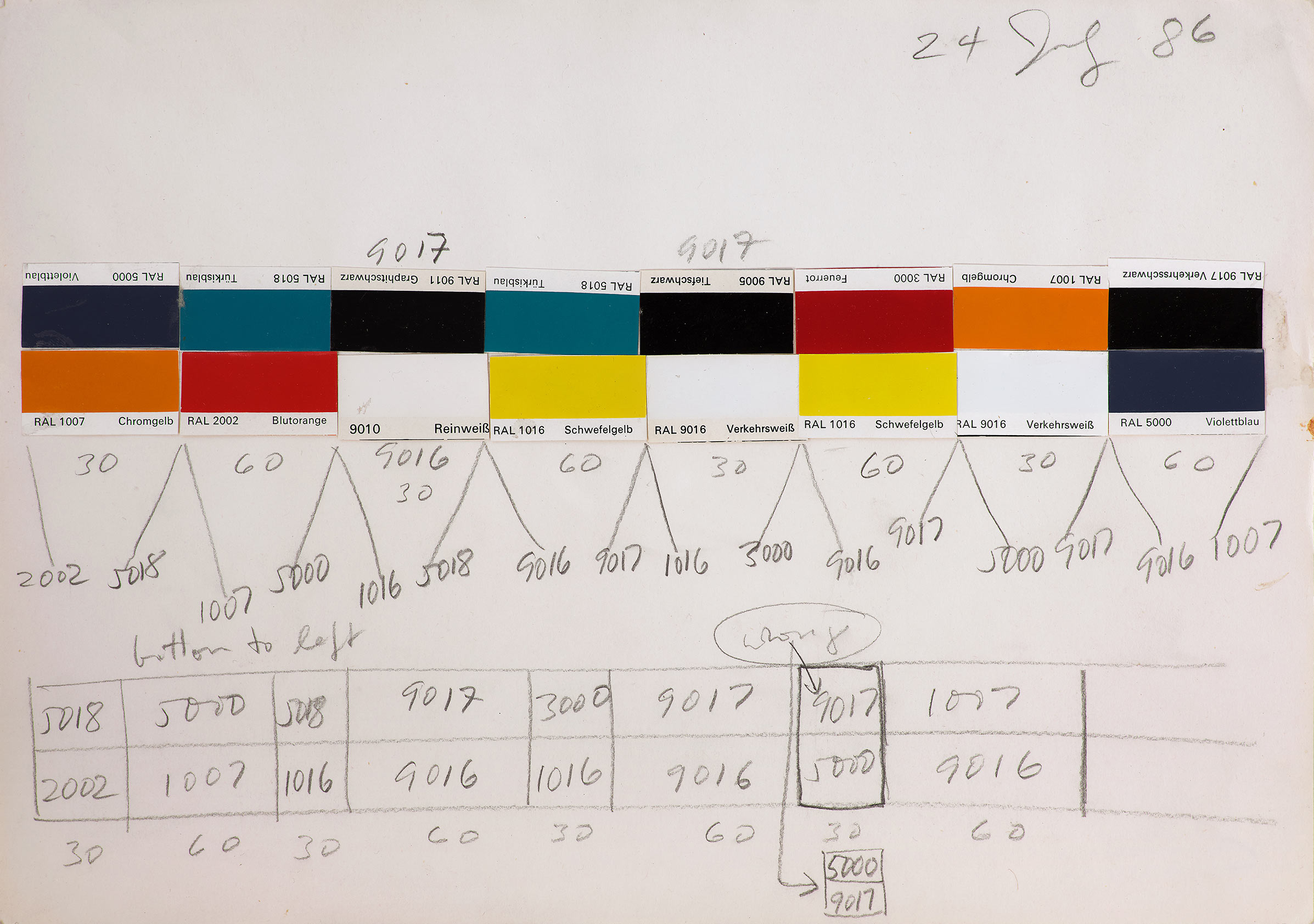 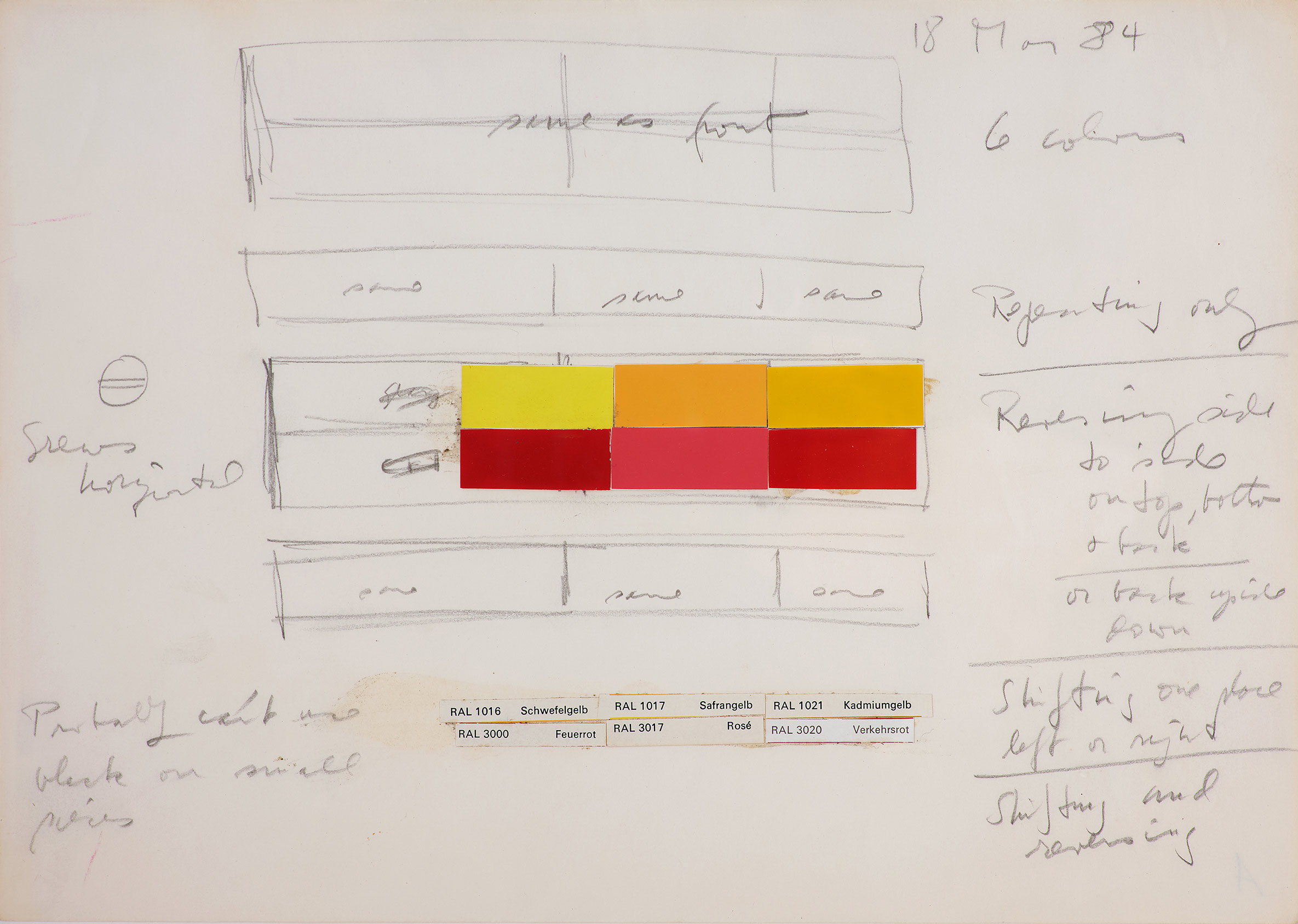 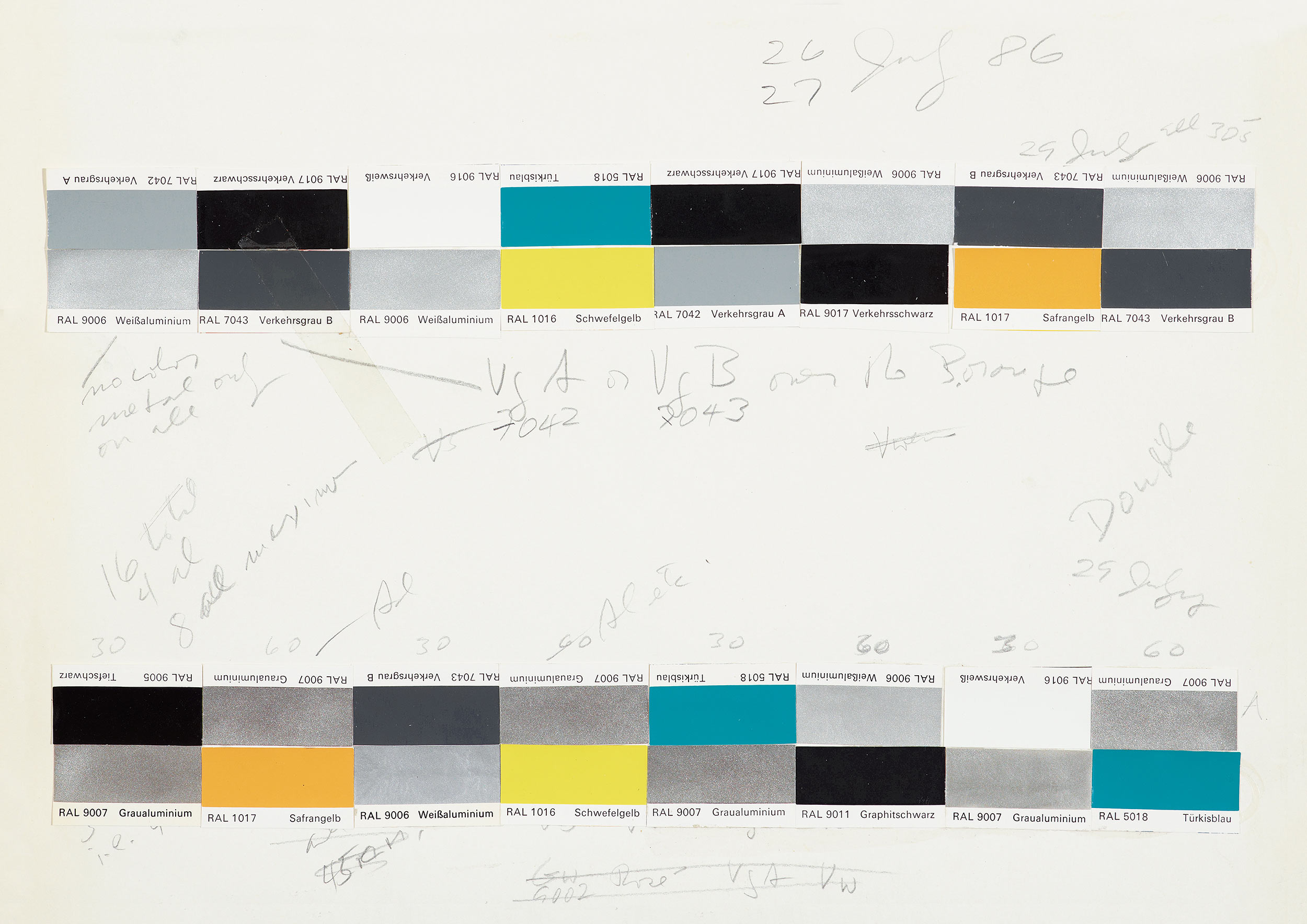 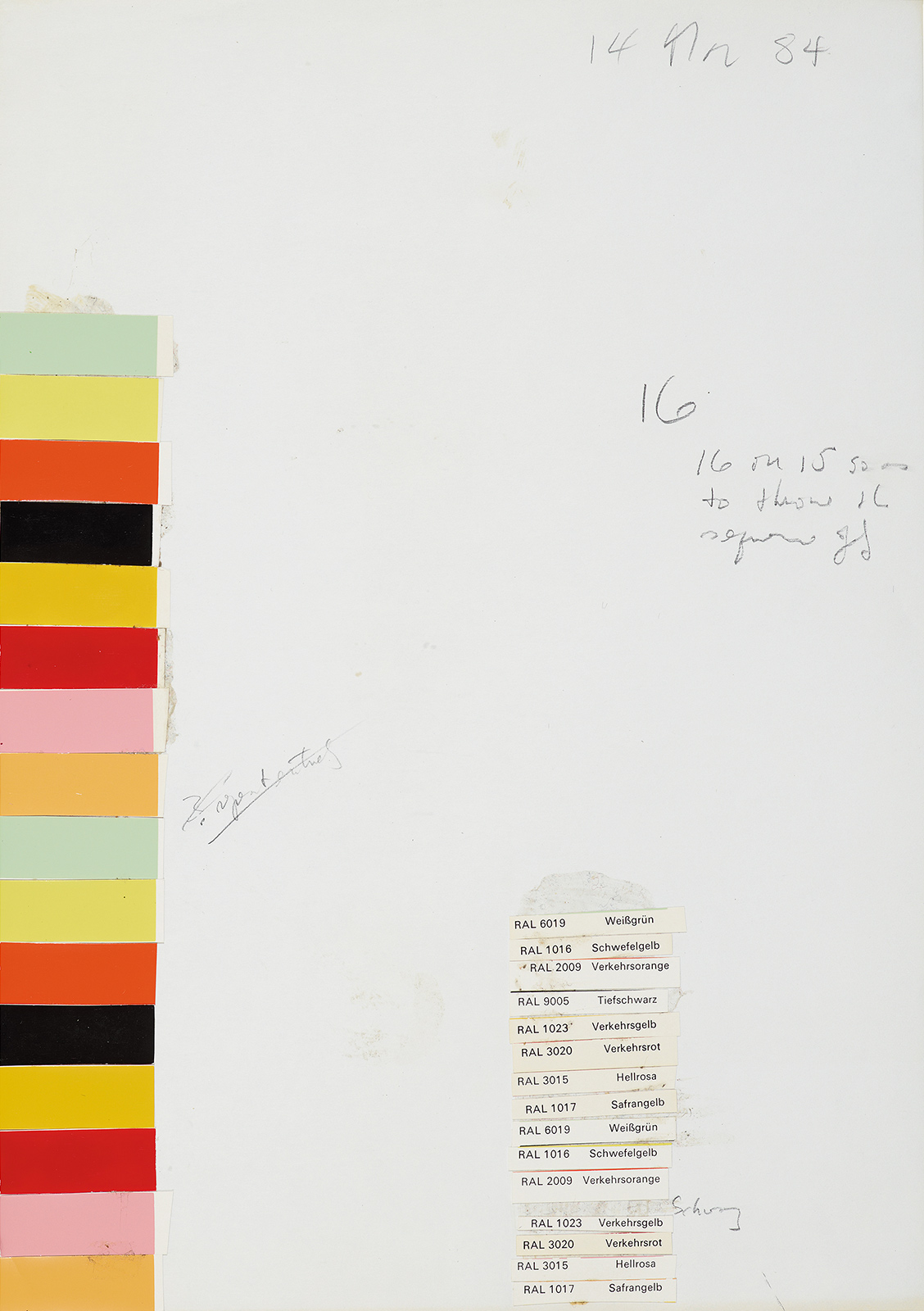