The artist examines the human ability to reemerge from oppressive states in this portfolio for Document's Fall/Winter 2019 issue.

The bodies contort in the most amazing ways—a leg pulled up over a tilted-back head; an ass raised up off the floor; legs supported on tiptoes; a back bent so far backward that a head looks out from between feet. In these poses, pudenda are often exposed, the camel toe of sex organs delicately drawn. The figures are single and doubled and otherwise multiplied—mirrored, reflected, interlocked, one becoming more than, the self as collective. They are acrobats, perhaps, but floating on the page, they might also be synchronized swimmers. Wearing leotards or maybe maillots, their limbs and faces occasionally obscured so what remains is that which covers them; an item of clothing is morphed by the extreme movements of the body into an unrecognizable abstraction.

Occasionally, an emphatic pencil mark suggests a nipple, making you wonder if the bodies are naked or dressed. But does it matter? The figures are made to be seen. Their bodies are spectacles.

Hayv Kahraman’s work has dwelled on her image in multiple ways, imagining her body both in its specificity—as a person of Iraqi-Kurdish origin who fled her home as a preteen refugee, ending up in Sweden, before making her way to the US as an adult—and in its generality. The Los Angeles-based artist’s experience of displacement, of existing in the double or triple consciousness that results from finding one’s origin in many places at once, echoes throughout her work. Thinking and dreaming in many languages; remembering and forgetting from where one came—this is how so many of us live. The past lives on, not in a simple biographical account of geographical displacement, but in muscle memory, in the way we are forced to fit our bodies into new forms of life, often as a result of the traumas of war, the repressive powers of the state, poverty, and environmental disaster.

“Hypervisible in my FLESH/Invisible in my HUMANITY,” writes Kahraman above a group of contortionists who duplicate one another’s poses in what could be an endless tower of bodies. The paradox coalesces, another notation suggests, in part from Italian philosopher Giorgio Agamben’s articulation of “bare life,” a condition in which the biological fact of life is privileged over the way it is lived. When we see refugees washed up on a shore, caged in detention camps, sprayed with tear gas, or shot, do we identify with the loss of or threat to breathing bodies? Or do we see the life that is lost—the pleasures, the comforts, the ideas, the work, the play, the love, the creativity, the anger, the pain, the frustrations, and so many other things that will no longer exist in the world with the loss of this body?

The bodies seem implausibly alive under the pressures of abstraction, mirroring the arduous existence led by many people in this world at this very moment. 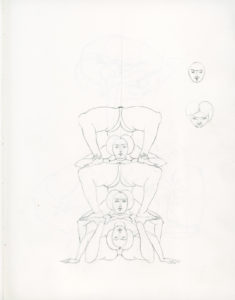 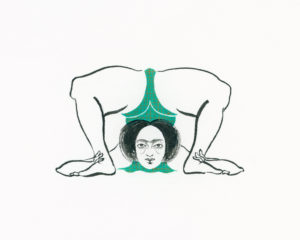 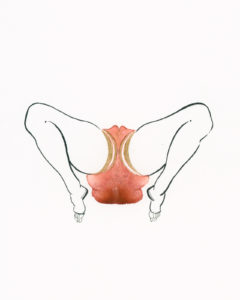 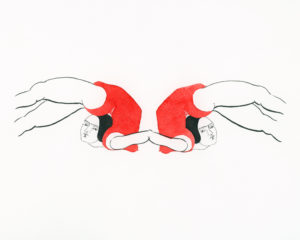 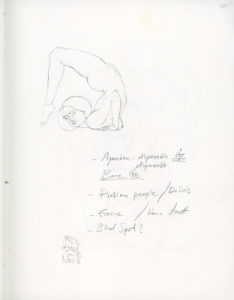 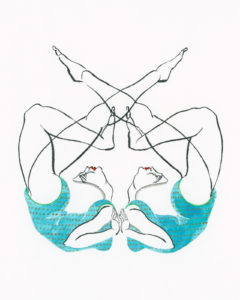 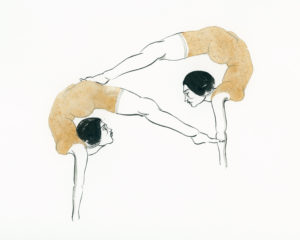 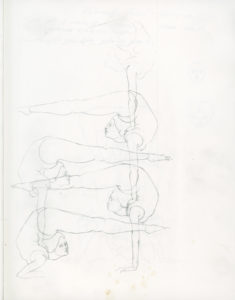 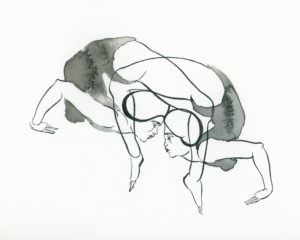