The musician joins Document to discuss collaborating with Hedi Slimane, collective mania, and receiving creative counsel from a ghost

“I don’t know what country I’m in, but I’m happy to be here,” excuses a sleepy Leah Hennessey, lead singer of The Band Hennessey, having finally disembarked from a series of red-eyes to be in Paris the day before the Celine Spring/Summer 2023 menswear show. Attending as a guest this season, she was handpicked by Creative Director Hedi Slimane to provide one of the legendary soundtracks to his runway show for Autumn/Winter 2022 womenswear this past March. Hennessey collaborated closely with Slimane to remaster her track “Byron Is Dead” about the 19th century romantic poet Lord Byron, who may have been nodded to in the capes and high boots seen in the show.

Sunday’s presentation was accompanied by music from New York band Gustaf, which perhaps spoke to the new wave influence in the collection: boxy blazers dripping in pearls and crystal brooches, generous suiting (a notable departure from Slimane’s inclination for the pinched) with whisper-thin ties, embellished cardigans, and metallic bomber jackets, and a sweatsuit combo lined in lightning bolts. 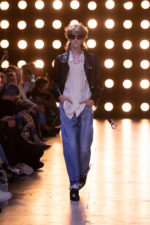 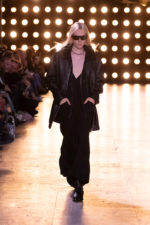 Divya Bala: What was the collaborative process like with Hedi?

Leah Hennessey: I think music is his thing, and photography is his thing, and fashion is his thing—he’s a renaissance man. [‘Lord Byron’] was based around a song that I already had a demo of, ‘Byron Is Dead.’ And I thought he did exactly what a music producer always does, which is ensuring the success of the song for the given context. In this case, it happened to be in a fashion show and not on the radio. But he had very intelligent, aesthetic notes. There was a sound in the track that I think he said was too ‘science-y.’ I felt he understood how a sound could be inherently camp. He wanted it to be a bit more straightforward and serious, which I appreciated. He also had notes about compressing the overall dynamics of the song to make it one, trance-like feeling. I think it was just a lot of trust. I trusted that he knew what he was talking about, and then he trusted me and my producer and sometimes bandmate EJ, to make elegant decisions.

Divya: Are you working with Celine this time as well?

Leah: I’m coming as a guest and there’s a whole crew of rock star girls who came out for this show. CumGirl8 is playing, Gustaf is doing the music for the show, so Lydia is here, and also Sabrina Fuentes from Pretty Sick, I don’t think she’s here for Celine, but she’s here. There’s a huge crew of New York rock star girls all at the same time in Paris. It feels like an invasion.

Divya: Is fashion a language that helps you communicate your character on stage?

Leah: I think when you’re wearing more feminine clothes, the thought that always comes to mind is the angle at which people will be looking up your skirt. I’m always thinking about the height of the stage, and the angle at which you’re going to see the clothes. With performance, it’s like you’re in a play—you do dress rehearsals in the shoes you’re going to wear, but not necessarily your full costume because it’s all determining how you move and walk and, by extension, how you feel and talk.

“There’s a huge crew of New York rock star girls all at the same time in Paris. It feels like an invasion.”

Divya: Where does your music best live?

Leah: I had a revelation from a ghost—who I won’t name—and this spectre [said] that the function of music is to describe space. Ever since then, I’ve been thinking about the physical space that my music describes. But I don’t think I’m really there as a musician to have a firm grasp of that. And actually, the place I really want my music to live is in fiction, and right now I’m working on a pitch for a television show I’m developing, which is kind of connected to the song I put out with Celine. It’s a show in which I play Lord Byron, that 19th century romantic poet, and I really want to incorporate my music into that show and to be performing in character. I think that’s always been my dream with music to be a fake rock star and to be in a fake band. I’m not really interested in authenticity. I’m slowly working on an album as Hennessy and I’m doing some shows in the UK this summer, but the big dream is for the music to live in a fictional context.

I did a web series for many years called Zhezhe, and in that show, we had a fictional band called ZheZhe and we made music for that band. I did that for many years and then realised I wanted to make my own music as myself and not as a character, but the limitations of being myself are pretty restrictive. There is nothing that’s more liberating and glamorous and exciting [than] putting music into a fictional context—whether that’s a TV show, or a concept album, or a stage show. The idea of making music as myself and telling my truth and being me, it’s just a little boring [laughs].

Divya: Being that you have all these outputs, is there one thing you could point to and say, ‘That’s 100% a representation of my creativity.’

Leah: I think everything is, I don’t think I’m a purist like that. I think that the work, the artistic output, is just a record of a life lived. Live performance is definitely the highest of the highs, and it’s very hard to capture and to point to it later and say, ‘This was the thing, this was a moment of transcendence. I did this.’ It’s really something fleeting. It’s ephemeral.

“The idea of making music as myself and telling my truth and being me, it’s just a little boring.”

Divya: Do you remember the first thing you created that felt like the beginning of your body of work?

Leah: I think, first, we’re in therapy. The first piece of work that felt like the beginning of everything I am now was in high school. I did a production of Euripides’s The Bacchae that was very much influenced by the San Francisco drag acid collective The Cockettes. It was very much an homage to the Cockettes. It was a punk, drag interpretation of a Greek tragedy and incorporated a lot of contemporary music and songs that we wrote. It was the first time I saw the power of collective mania, within the context of a rigorous adherence to beauty. I think if I could just keep doing that, I would be happy, but I think everything I do is, in some weird way, is [stems from] that. There is nothing more satisfying than writing a good song.

To me, one of the greatest joys is writing a song in as much time as it takes to sing it. I think when you start writing songs you obsessively read all the songwriters talking about their process. You read about Jackson Browne writing ‘These Days’ when he was 15 years old or something and you just think, ‘You’re a liar. That’s not true. There’s no way that poetry can come out like that.’ But when you have a songwriting practice that’s consistent and you force yourself to finish songs, they come faster and faster, and you inevitably hit this point where you write songs in as much time as it takes to sing them. I would recommend to everybody [to do that once] before you die. It’s such a deep pleasure, whether the song’s good or not. I have a songwriting collective with my friends and we meet up once a week online and we have to write a new song. We’ve been doing it since Covid started. It’s just a fact that the best songs you write the fastest.

I’m not a musician with a capital M, I’m not a skilled instrumentalist, I’m very shoddy at recording, I’m really a lyricist, but it can be done and that’s the point of it. It’s just as hard to do something impossible as it is to do anything at all. 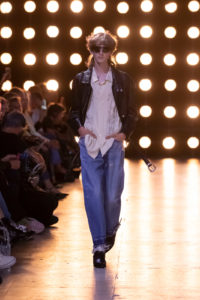 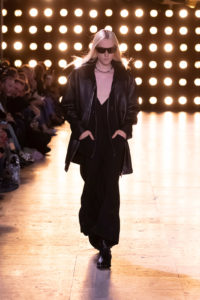