Burned books transformed to ashes, drenched and pulverized fragments of documents scattered on the ground. This is what remained of the greater part of The National Library and State Archives of Iraq after the US invasion of Iraq in the spring of 2003. A centuries old archive of not only state events and political concerns, but also the Ottoman era documents of people’s lives, of land deeds and marriages, of inheritance and kinship ties had been both burned in fire and damaged by water. The buildings in which they were housed transformed into burned-out shell-like structural ghosts of iron beams, soot and ashes. Soon after the invasion, some archival material of historical importance was either removed or confiscated by the U.S. At the same time, it became clear that finely made old books—hand calligraphy Medieval manuscripts—were also stolen by looters for an international market in rare books and manuscripts. At the Iraq Museum of Archaeology, clay tablets bearing cuneiform writing, thousands of years old, were stolen along with the other looted archaeological artifacts and works of art; and even today, cuneiform tablets continue to be smuggled out of the country. 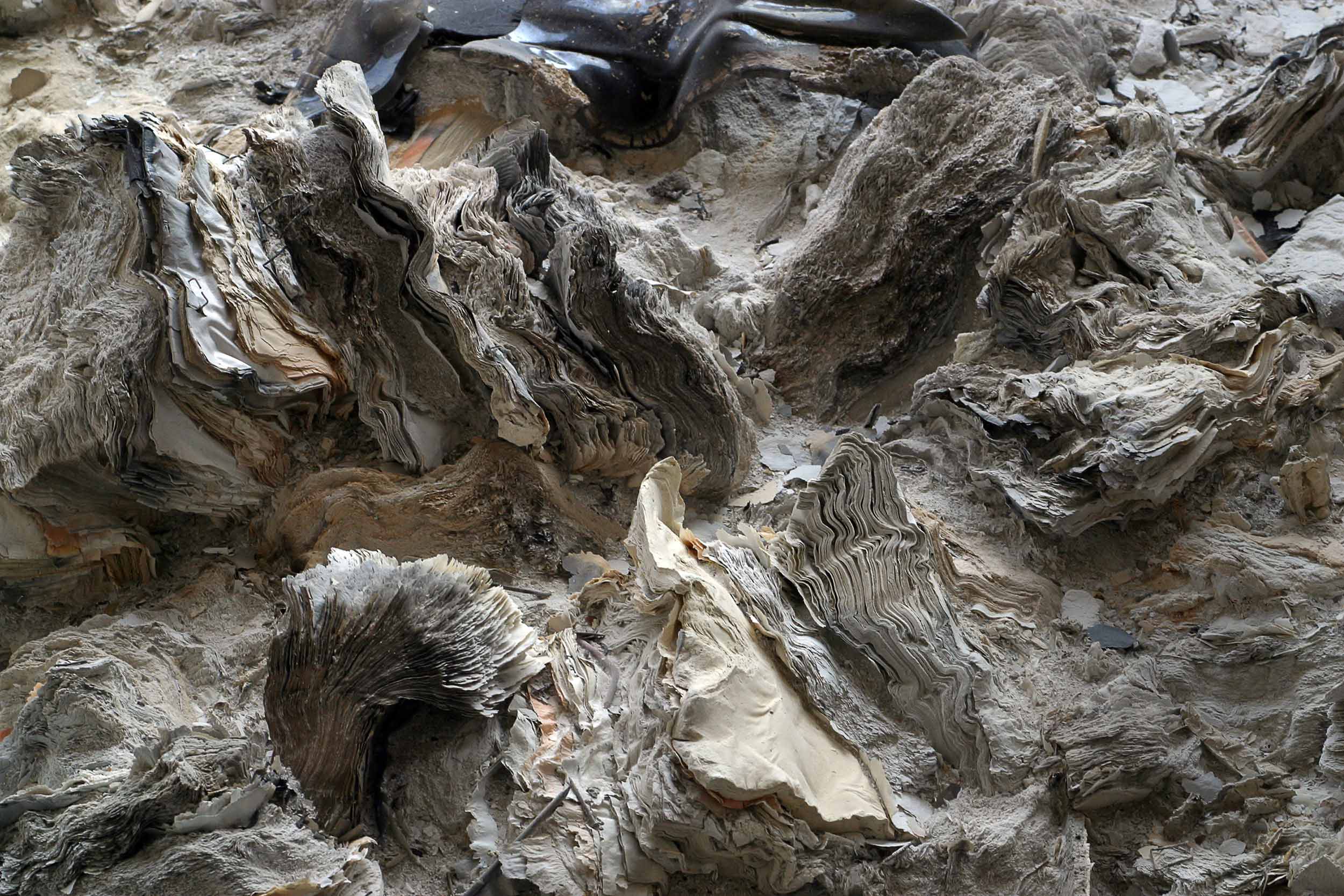 All of these written documents, letters, books, manuscripts, legal and official papers, and even the files that the surveillance-obsessed police state of Saddam Hussein kept on its own population (similar to the Stasi files), are what form the stuff of documents in a literate culture. And Mesopotamia, let us remember, is the world’s first literate culture.  The damage, destruction, erasure and theft of its written archives, no matter how seemingly mundane, whether it is a matter of police surveillance records or land deeds, is poignant to those who are aware of world history. History begins in Sumer, as the great American scholar Samuel Noah Kramer once said, and the French philosopher Jacques Derrida reminds us that the word archive has its roots in the Greek word for beginning and for authority. Without control of the archive there is no political authority, he said. In Iraq of 2003, the loss of the archives was the first step to the loss of a national collective memory.

In 2003 and 2004 while working on the preservation of cultural heritage in Iraq, I first encountered the destroyed remains of the National Library and State Archives, an institution which is equivalent to the Library of Congress in the United States. The war had induced in me a fixation, a type of archive fever that led me to Iraq in the first two years of occupation, where I had hoped to do whatever I could to save what remained of monuments, archaeological sites and museum collections after the destruction of the 2003 ground war. When I arrived in Iraq I quickly realized that I shared this archive fever with the head of the National Library, Dr. Saad Eskander, and with a number of other Iraqi intellectuals, students and museum professionals, each of whom applied her or himself as if driven by some Medieval genie let out of a bottle from the One Thousand and One Nights. We had in common a reckless obsession with preserving history, things and documents. Many told us we were misguided, that we should not focus on inanimate things when people were dying, but we saw these forms of annihilation as two sides of the same coin.

“The remains of the Ottoman archive, the history of Iraq for over four hundred years, were for a time stored in this bombed building, held together by an old kitchen freezer.”

The first two years of war and occupation were a violent time of horrendous destruction. I remember driving through the streets of Baghdad searching for any buildings still standing that we might re-appropriate for housing what remained of the collections of the library, since the library building itself had turned to ruins. At one point, the remains of mildewing historical papers had to be kept frozen so that continuing damage could be stalled until conservators could come, and proper paper conservation methods applied. Dr. Eskander had found an abandoned freezer in the kitchen of bombed-out remains of the private club where formerly the Baathist elite officers had gathered for an evening’s entertainment. There was of course no electricity, so he acquired a generator to keep the freezer going, and hired a guard to stand in front of the generator. The remains of the Ottoman archive, the history of Iraq for over 400 years, were for a time stored in this bombed building, held together by an old kitchen freezer. This is the kind of bricolage and creative thinking that went into the conservation work of people like the director of the National Library, when little help came from the outside world and from the occupying authority. There are many such stories to tell about heroic efforts by what remained of the Iraqi scholars and intellectuals in the first years of the war. Hundreds of university professors and intellectuals were also assassinated in those years, and, like other Iraqi War dead, no official record has been kept of their deaths.

The Baathist secret police archive was airlifted out of Iraq by U.S. forces, and is now housed in the Hoover Institute at Stanford University. Destruction of archives incites a collective amnesia, an eradication of memory by means of erasing its documentary and historical apparatus, consigning it to the flames. Because of the destruction of documents and the record of the history of kinship and ties to place that all the peoples and religions of Iraq have, those who wish to incite ethnic hatred and religious intolerance can rewrite history as they please. When documents are confiscated by foreign powers the result is similar; without them there can be no reconciliation for Iraq, and there can be no peace.