When the Dia Art Foundation wanted to bring back Andy Warhol’s Shadows series to New York—the city where they were produced and first exhibited—it tried to secure a location in SoHo, close to their original showing at Heiner Friedrich Gallery on West Broadway. But when the efforts turned out to be fruitless, a conversation that was initially about the conservation efforts for the works with Calvin Klein and Raf Simons turned into an opportunity to show them at Calvin Klein’s headquarters at 205 W. 39th Street. “I’m incredibly pleased to encounter this space and have a conversation about the fact that it’s obviously a street-level gallery, a very industrial space typical of the type of spaces that we use at Dia, and that they were generous enough to lend it to us,” said Dia Art Foundation director Jessica Morgan about the move that further deepened the four-year partnership between the Andy Warhol Foundation and Calvin Klein that allows it to license the pop art icon’s work for its collections and activations.

Now, 48 of the 102 canvases from Warhol’s iconic 1978-1979 Shadows series are hanging in the ground level space at Calvin Klein’s headquarters through December 15 as a pre-cursor to the mammoth upcoming exhibition at The Whitney from November 12 to March 31, 2019, Andy Warhol—From A to B and Back Again. It’s the first time the abstract paintings are on view in New York since 1998, when they were exhibited at the Dia Center for the Arts for an entire year.

In a way, the Shadows series also highlights the connection between Warhol and the Dia Art Foundation. “Heiner Friedrich, one of our co-founders, had a gallery, and so the Warhol works were a commission from Dia, but there wasn’t exactly a place to show them, and so they were then shown at Heiner Friedrich’s gallery, though they were not actually for sale at the time,” said Dia Art Foundation deputy director and chief curator. “It was just an exhibition space.”

The starting point for Shadows was a series of photographs by Ronnie Cutrone that explored the idea of shadows. Warhol took it a step further by having them back photographed for a screenprint. They were then printed on to the canvas, which Warhol had painted over. Although the work is abstract in nature, it encompasses a number of media with which Warhol worked. “There’s a sense of seriality, but also a sense of the engagement with mixed media, usually when we talk about mixed media with Warhol, we’re talking about design, we’re talking about screenprinting, filmmaking, photography, and yet here in the painting, we see almost every example of the media in which he engaged,” said Martin.

Martin also discussed Warhol’s investigation of the interplay between light and shadow. “So when you see this peaked edge coming out of either color or coming from color out of the dark, what you’re really seeing is Warhol making a real statement I think, about both painting, but also specifically abstract painting at this moment,” said Martin. “When they were shown, at the Heiner Friedrich Gallery, they were shown as you see them here, edge to edge and hung low. And it is this orientation of the edge to edge and low hanging quality of them that will carry with them for the next almost 40 years.” 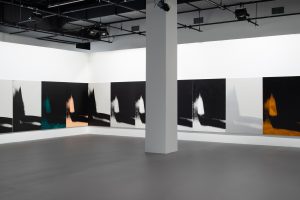