“Big Changes Are Happening at Interview Magazine,” read one recent headline about the steady tumult underway at New York City’s last standing beacon of culture and personality, Interview magazine. As it was announced yesterday that Andy Warhol’s baby had shuttered for good, leaving its employees to pen Twitter eulogies and download their emails all before noon at the start of a work week, reports on the Peter Brant-owned publication had, for some time, appeared suspiciously optimistic. But as the lawsuits for owed wages multiplied against the billionaire and as the continued unrest at the magazine’s Greene Street office crescendoed into yesterday’s announcement, the surrounding speculation faded into something cynical. How else are we supposed to stare down the particular kind of doomsday that hangs over any print publication claiming the heft and hubris of legacy?

It’s the same unflagging optimism that one of Interview’s original architects, Bob Colacello, related to Document yesterday, upon hearing that the title had filed for bankruptcy. “I’m not going to give up my faith in print. It’s important to keep the form alive. But this is just sad, and I’m sorry, what can I say.” In 1971, Colacello stepped in as the magazine’s editor at Warhol’s request. He spent the next 12 years “turning the tape recorder on” for the publication’s trademark Q & As and writing dispatches on New York’s party scene for the magazine that, as Colacello puts it, did it all. “It was in many ways the first magazine that covered everything. The first to cover people, really, and then anything we could think of—ballet and diplomacy, fashion and sports—many generations, many sexualities.”

Colacello had only been notified of Interview’s demise when Document first reached out for comment. Midway through our conversation, he received a conciliatory text from Paul Wilmot, the legendary fashion publicist. “There seemed to be so much turmoil on both the publishing and editorial sides recently.” He refrained from offering his thoughts on Brant’s management in recent years, while expressing his great respect for the work of Fabien Baron and Ingrid Sischy, who revitalized the magazine in the 1990s through the early 2000s during her 18-year-tenure as editor. Brant outbid the entrepreneur and publisher Malcolm Forbes for the rights to Interview shortly after Warhol’s death in 1987, and hoped to return the magazine to its Warholian glory. At the time, Colacello was among those critical of then editor Shelley Wanger, who was pushed out shortly after the Brant takeover. “The more Shelley Wanger cleansed Interview of its body worship and mindlessness,” Colacello wrote in Vanity Fair at the time, “the more she turned off the Warhol cult, the hip young kids, not all gay, who bought it for just those things.”

The end of Interview has left Colacello feeling like one of the last arbiters of the so-called Warhol cult, of the age of dispassionate cool and mechanical reproduction. “The idea that it’s gone is a major shock to me,” he said. “Losing Glenn [O’Brien] was such a great shock, too. In the end, it seems that I’m one of the few still standing—it gets a little lonely to think about.” Colacello points out that Warhol, should he have been alive to see his magazine’s last days, would have felt less sentimental. Or, at least, would have presented a kind of public-facing indifference. “Andy tried to be unfeeling about things,” Colacello said. “He never liked gratuitous emotion. If he had heard that the magazine folded, he’d probably say, ‘Oh gee, somebody will just have to do something new then.’”

Unsaid during our conversation is the fact that Warhol’s spontaneous production, the unsentimental engine of his creativity, is the true flame that flickered out in yesterday’s news—really, anyone and anything associated with New York City’s downtown circles have been mythologized into every crevice of the popular cultural imagination. “He made synergy his work. He’d bring in Priscilla Presley, Vivian Vance, Julian Schnabel, Jack Nicholson, Jean-Michel Basquiat, just anyone, and flip on the tape recorder. I’d find the writer. He loved that there were 100,000 pieces of paper floating around the city that read, ‘Andy Warhol’s Interview.’ Andy loved it. All of it.” 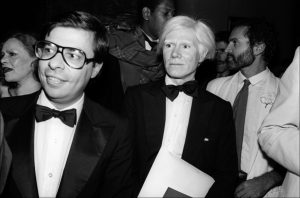