Cape Town pushes its ‘Day Zero’ back to July.

At the end of April this year, Cape Town was destined to become the world’s first city to run out of water. But thanks to efforts from residents, they’ve managed to push date the date to July. The city’s provincial premier, Helen Zille urged residents to keep up the good work, but added that saving water is now a way of life for the city. In this New York Times piece, they reveal how the city is building a network of desalination plants to reuse sea water, but it’s unknown how long they will take to be completed.

“For anyone accustomed to plenty, the picture is grim: Taking a two-minute shower, flushing a toilet once, washing a load of dishes, and doing ordinary drinking, cooking, cleaning and tooth-brushing is enough to reach the limit.

“Even with the conservation it has achieved, Cape Town is still using about 16 percent more water than its goal of 450 million liters daily. Unless the city reaches that milestone, Day Zero might get closer, not farther away.”

Wisdom comes from how we cope with things.

Everyone will experience a chaotic event at some point in their life. But a new piece of research from Ohio State University suggests that the inevitability of trauma or difficult life events might serve as a way of helping us to reevaluate. Carolyn Aldwin, director of the Center for Healthy Aging Research at the College of Public Health and Human Sciences in Ohio wanted to understand what life events mean for our personal narrative, so studied a group of 30 people to find out more.

“The majority of the participants indicated that the difficult life event disrupted their personal meaning and prompted the person to reflect on themselves, their fundamental beliefs and their understanding of the world. ‘For these folks, the event really rocked their boat and challenged how they saw life and themselves,’ Aldwin said.”

Making your millions from an underwater treasure windfall might seem like a story from yesteryear but a new business is trying to bring it back by using a combination of robots, AI and blockchain to build the largest fleet of autonomous gliders in the world. The fleet would allow investors to access open data sets of where shipwrecks and minerals are on the seabed, and invest in them using DeepWater Treasure Recovery tokens. CEO of DeepWater Systems Alejandro Gavrilyuk explains why he’s systematically scanning the seabed along the historical trade routes between the New and the Old World in the Caribbean Sea, in the Atlantic and Pacific Oceans.

“Initially, the DeepWater project was designed as a private system for exploring and searching for sunken objects. We did not plan to sell the coordinates of the objects, but having analyzed the market of deepwater surveys, we were sure that there is no analog of our system and will not appear in the near future, we decided to be the first and take the leading position.” 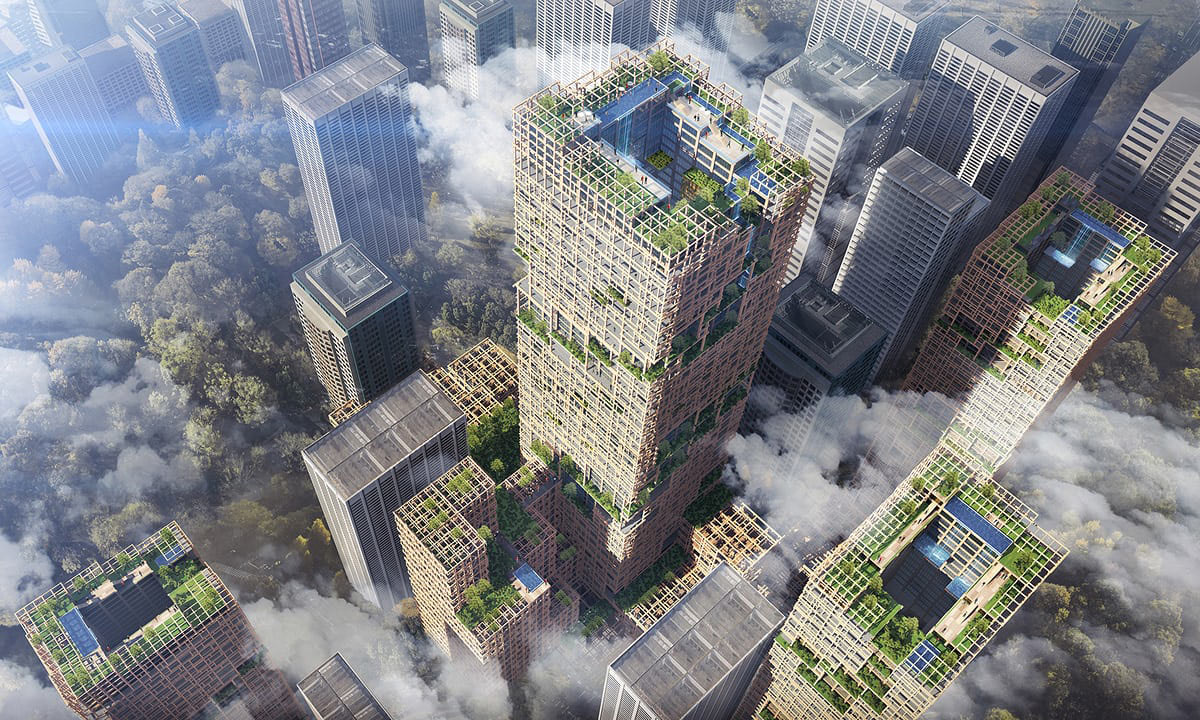 Tokyo will soon be able to boast that they have the world’s tallest timber-built skyscraper.

The Japanese capital consisting of skyscrapers and towers is about to get another addition to its uniquely compact skyline. But rather than blocks of steels and glass, Tokyo’s new build will be 1,148-feet of timber. Set to be completed by 2041, the W350 tower will be 70 stories tall and made of 90% wooden materials. In 2010, the Japanese government passed the Promotion of Use of Wood in Public Buildings Act, which requires all government buildings up to three stories high to be constructed with wood, or to utilize wood, a key element the tower’s architects wanted to encompass.

“It isn’t only Japan where wooden skyscrapers are putting down roots. Over the past decade, there has been a global explosion of timber towers, either built or proposed, every one seemingly a recorder breaker in some respect.

“Canada currently holds the world record for the world’s tallest timber tower, at 164 feet tall. The 18-story Brock Commons Tallwood House, a student residence, topped out last year at the University of British Columbia (UBC), in Vancouver, and has been dubbed the world’s tallest “plyscraper.”

An unearthed tape of a famous Andy Warhol interview reveals how his talk of sexuality was easily censored.

In 1963, as a part of a series for ARTNews called “What is Pop Art? Answers from 8 painters,” the art critic Gene Swenson conducted a now movement-defining interview with Andy Warhol. In it, the Pop Art populist talked about making art on an industrial scale and why everyone should start using machines. But the tapes of the original interview have recently been unearthed, and they tell a very different story.

In a paper for the Oxford Art Journal, academic Jennifer Sichel reveals how when she listened back to the interview, it’s main focus is about the movement’s relationship to homosexuality, but subsequently, all mentions of queerness were omitted by the final published piece:

Swenson: What do you say about homosexuals?’ and ‘What is Pop Art?’

Swenson:   I don’t understand the business about—if all Pop artists are not homosexual, then what does this have to do with being a machine?

Swenson:   You mean you should like both men and women?

Swenson:   Yeah? Sexually and in every other way?

Are ebooks “stupid?” The head of one of the world’s largest publishing houses thinks so.

The publishing industry has been through the mill as of late. Binded printed pages seem to be living through their last days, while Audiobooks overtake the written word. So it’s understandable when leaders of the industry lash out.

Arnaud Nourry, Chief Executive of legendary French publisher Hachette Livre, the world’s third-largest publisher, has gone on record to say ebooks are a “stupid product” and that the recent “plateau, or rather, slight decline” in worldwide sales signals the end for the digital replica.

“According to figures from the Publishers Association, consumer ebook sales in the UK fell in 2015 and 2016, from a high in 2014. That was the year Hachette and Amazon came to blows over ebook pricing, with the publishing giant refusing to cede price control to the online bookseller. Nourry told Scroll.in that, after studying the “mistakes” of the music and video industries, he became convinced that publishers needed to keep control of prices.”