How Bob Colacello became the one every A-Lister shared their secrets with.

“It’s not just what you say, but how you say it. That’s what my Neopolitan grandmother always used to tell me,” said Bob Colacello. His grandmother’s words of wisdom have guided Colacello throughout his work as editor of Interview, as a Special Correspondent for Vanity Fair, and author of Holy Terror: Andy Warhol Up Close and Ronnie and Nancy: Their Path to the White House (his first of a two-volume series books on the Regans).

New media demands that artists need to be jacks–of-all–trades but there are only a rare few who can do it with the same dexterity as Colacello. His new show at the Vito Schnabel gallery, “Pictures from Another Time: Photographs by Bob Colacello, 1976 – 1982″ showcases his work as a photographer. Many of the pictures have never been seen before, although Colacello’s work has been shown previously, and a selection of his photos were published in a book OUT in 2007.

Looking through the collection of 170 prints and photographs is like being taken by Colacello to all the best parties of the 1970s and early 1980s. Colacello, who never formally studied photography, although he holds an MFA in Film as well as a degree from Georgetown’s School of Foreign Service, is characteristically modest when describing his work. “I never thought of myself as a photographer,” he says.

As editor of Interview for 13 years, he and Warhol often took pictures of the same party; people tended to stop and pose for Warhol while Colabello took pictures when no one was looking.  Colacello’s style is spontaneous and voyeuristic, he uses light and flash to give the pictures immediacy. But his real accomplishment is in getting all of these terribly private people to show him their silly, joyous sides.

Warhol and Colacello both got their cameras at the same time, while in Bonn in 1976. There is one rare photograph of Warhol reclining in their hotel room, which Colacello took just after the two had bought their new Minox cameras together. Colacello tucked his new device in his jacket pocket and went everywhere with it. He traveled to Venice, Houston, Key West, Santa Monica, Monte Carlo, Rio de Janeiro, Gstaad, Tehran, and the Amazon, among other locales exotic or mundane. (One picture from a trip to the Amazon shows two gardeners wrestling with a “baby” anaconda which had made its way into somebody’s garden). The new exhibition also has pictures of the weddings of society swans Marisa Berenson, Maria Niarchos, and Princess Minnie de Beauvau-Craon, in Beverly Hills, Deauville, and Alsace-Lorraine, respectively. There are photos of the jet set in Acapulco, including Lady Bird Johnson, Henry Kissinger, Betsy Bloomingdale, Jerry Zipkin, Baby Jane Holzer, and Pat Cleveland. There are many private shots of Warhol, a constant companion on these jaunts.

Some of the pictures have a hazy, almost tipsy feeling to them. That is partly by design—Colacello wanted the viewer to feel they were at the party—and partly because, well, the photographer was tipsy himself. Colacello has been sober since he was 45, well after the Warhol factory days. He considers himself a survivor of that era.

“I always had my family, and they always were there for me. I did not see Andy in the Factory as my family, although it was like a family. Although I was able to break with it, like, in early ’83 because I had somewhere else to go,” says Colacello.

As a Baby Boomer, after Vietnam and Watergate were over, and Nixon was gone, Colacello said his generation were tired of protesting. “And it was like this new disco music came from black bars into gay bars, which made everyone want to go to gay bars, so the gay thing became acceptable and new and fresh. And then Studio 54 kind of brought the whole thing together. Uptown, downtown, black and white, gay and straight, everything… And Jimmy Carter’s Surgeon General was then saying that cocaine is like marijuana, not like heroin. It was a Category Two drug, and we had no idea that cocaine would lead to eventually heart attacks and liver disease. We just thought it makes us stay up longer and drink more and it’s more fun. But at the age of 45 I realized that I couldn’t continue on that path.”

As a naturally social person, Colacello never needed substances to talk to people. So he concedes it might have been easier for him to be sober than it was for others.

“One of the reasons Andy started taking me on all of these trips with him shortly after I was hired as editor of Interview was because he realized I could talk to anybody, and therefore I could help them sell the art. I mean, I could—and Andy needed help verbally, because he would say, ‘Oh gee, oh wow, oh great.’ He wouldn’t know what to say.”

After Bob left The Factory, he started writing for Leo Lerman at Vanity Fair. “I went to Leo and I said, ‘I want to write a profile of Larry Flynt,’ who had announced that he was running for President, and who had gone to the Supreme Court and called them four dicks and a cunt or something like that.” After writing up the hilarious and harrowing experience of following Flynt and his machine gun-wielding security on the campaign trail, Colacello was given a contract at Vanity Fair. He stayed working at the magazine on an exclusive contract from 1984 to 2017 under Tina Brown and Graydon Carter.

His years at Interview, traveling with Warhol and meeting and befriending the movers and shakers of the day, allowed Colacello to open the gates to insiders’ worlds while keeping a professional amount of distance.

“The reader, they’ve heard the name Doris Duke, or they know who Nureyev is, or they know who King Juan Carlos is. But they don’t know the real story. Like, where do these people actually come from, where do they go to school, how do they get to be king, how do they get to be the most famous socialite in New York? And that is what always interests me. My stories for Vanity Fair always felt like were like mini-biographies, you know?

“I think if the person does end up in some lawsuit or divorce or scandal, they’ve already been humanized, so the reader can think, well, it’s terrible what they did, but they could see maybe why, or they could have  a fuller picture. So I just tell the story. I am not a big believer in explaining everything, you know? I mean, Andy was like that too. He never wanted to explain his art. He would give very flip, silly answers, which a lot of times would get him bad press.

Andy was the first one also to think that bad press was good press. I mean, we now have a president who has that Warholian philosophy carried to the nth degree, but he’s not the only one. You could talk about the Hilton girls, you could talk about the Kardashians. I mean, our whole society is so obsessed with being famous, but they have confused fame with infamy.”

Warhol had his own run-in with our president when he and Ivana commissioned the artist for a picture for Trump Tower. Trump hated the work and never paid for it. But Colacello thinks, even though Warhol was a liberal New Deal Democrat, basically, “I know he would have said, ‘Oh Donald is so terrible. Everything he wants to do is so terrible but he’s really good at getting publicity.’” 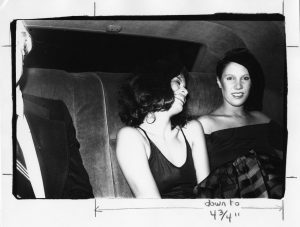 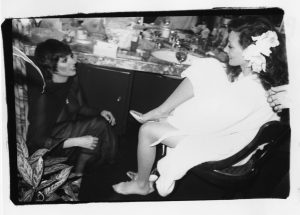 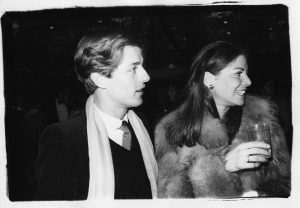 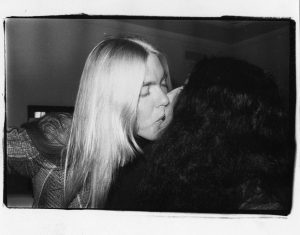 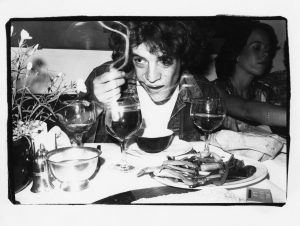 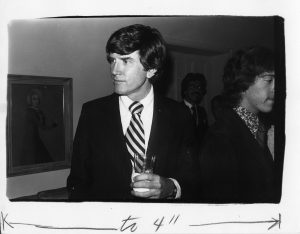