Ahead of ARC Music Festival 2022, “Chicago’s house music queen” reviews her genre’s history, from Lil Louis to Ralphi Rosario to a Beyoncé-sampled track

“If you want to learn more about house music, start with the fact that Chicago is its birthplace and go from there,” says DJ Lady D. As one of the genre’s pioneers—dubbed “Chicago’s house music queen” in 2008—she’s well-versed in its history and tradition, consistently performing, remixing, and producing in the true house spirit.

Ahead of her appearance at ARC—the Chicago music festival dedicated to dance music innovators and heavy hitters—Lady D selects the Gramaphone Records tracks that define the city’s house culture. She bridges its past and its present, highlighting the genre’s roots in soul and disco while drawing connections to its modern manifestations.

“A lot of major, mainstream artists are making house music really popular right now.” she says. “People are saying they’re resurrecting it, which is only true in the sense of radio. I’m really happy that the [mainstream artists] making house music now are reaching back and working with authentic house producers. Drake worked with Black Coffee, and Beyoncé worked with Honey Dijon and Terry Hunter. She even sampled some of the records in this stack!”

“Club Lonely (Lonely People)” by Lil Louis feat. Joi Cardwell
Lil Louis is definitely a trendsetter, and one of the pillars of Chicago house. He had such a big following and was one of the first to do a full-length house album that was picked up by a major [label]. “Club Lonely” (1992) is just a jam, and it features one of my favorite vocalists Joi Cardwell. We’re all proud of Louis because house music producers didn’t always get those mainstream looks, and were mostly relegated to just doing remixes.

“Get With U” by Lidell Townsell & M.T.F.
Liddell is really known for two songs, “Nu Nu” (1991) and “Get With U” (1992), and they were both on the same album. He’s another house music artist that got a major label look when Mercury Records put out an album with him. “Nu Nu” was a bona fide hit that’s been covered a million times, but this is the other sleeper, underground track that you could play and people would still be like, Oh my god. There are really great remixes by David Morales and Cajmere (aka Green Velvet), who co-wrote the track. Honey Dijon just sampled this for “Cozy,” which she produced with Luke Solomon and Chris Penny on Beyonce’s new album, Renaissance.

“Can’t Stop The House” by Thompson & Lenoir
Thompson & Lenoir released “Can’t Stop The House” (1987) with House Jam Records. Their label has a nice little catalog of early house classics—some of them are very rare, hard to find. I’m pretty sure this is a repress, but I’m glad, because we all want to have this piece of vinyl in our collection. It was recently covered by Sam Divine and Defected Records, because it’s just that good. When she says, “I pledge allegiance to the house groove,” that hits me right here in the heart. If Sam Divine hadn’t covered it, I probably would have wanted to.

“I’m Hungry” by Stopp
“I’m Hungry” (1983) is just one record, but it’s got to be representative of all the Italo disco that flowed through house parties from the very beginning. Soul and disco were a part of early house and proto-house, but then you also had Italo disco, which was very different. Back in the day, we were so eclectic and really open to all kinds of sounds. Italo disco played a big part [in developing] early Chicago house sound.

“You Used to Hold Me” by Ralphi Rosario feat. Xavier Gold
Ralphi Rosario is one of our hometown heroes. He’s right there with Frankie Knuckles and Lil Louis. He’s definitely one of our guys who’s still going, who did major label remixes and whole albums, and This Is Ralphi Rosario is like a retrospective of all of his amazing classic hits. People know him for being part of the Hot Mix 5—he was the youngest member then—and for his classic with Xavier Gold, “You Used to Hold Me” (1993). House history! He’s still doing stuff to this day. I was honored to add spoken word to his track with Craig Snider, Eric Kupper, and The Shamanic called “FK Always,” which was a tribute to Frankie Knuckles released earlier this year. Frankie was one of our [shared] heroes. It’s been my honor to work with him. 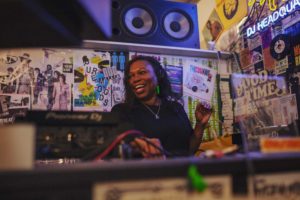