Ahead of his appearance at ARC Music Festival, the “Architect of House” curates a selection of the city’s best at Gramophone Records

Chip E., otherwise known as the “Architect of House,” holds a few claims to fame in the Chicago music scene: He produced legendary DJ Frankie Knuckles’s very first track; he’s behind “Time to Jack,” an early house anthem and blueprint for the genre; and he’s the only Chicago artist in regular rotation on all three of the city’s major radio stations at once.

“There are some people who question if Chicago is the birthplace of house,” says the DJ. “But I can guarantee you, a hundred percent, Chicago is the birthplace.” It’s the reason he’s proud to be performing in his home city this weekend at ARC Music Festival. “They’ve done an amazing job of celebrating Chicago house music, and recognizing not just the new artists who are out there, but some of the pioneers, like myself.”

In anticipation of his upcoming appearance at ARC, Chip E. took to Gramaphone Records to select the tracks that define his artistic journey—from his own music, to his past collaborators’, to the iconic mixes any true house lover should know.

“Do You Like This Beat (London Calling Mix)” by Auto Bahn
The group Auto Bahn was myself, Joe Smooth, and Rocky Jones. This [track] was my attempt to go more into new wave. All of the sounds are samples we created. We brought a motorcycle into the actual studio. We took the microphone outside and used it for the sidestick—it’s [the sound of] a seatbelt clicking in. It’s just a fun record.

“Children of the Night” by Kevin Irving
Rocky Jones discovered Kevin Irving at a talent show at Mendel High School. Rocky heard his voice and wanted me to work with him. I was working on a single called “If You Only Knew,” which is my big crossover record. It was written by Lady Maya, who was intended to sing it. She had no sense of pitch or key, so I asked Kevin to lay down a track for her to follow.

Kevin went solo and left me. He went off with Club Nouveau and started doing stuff with Dr. Dre. Kevin actually discovered Bruno Mars. He either wrote or produced everything on his first album. Sadly—shortly after Bruno started getting big—Kevin, they say, accidentally fell off a balcony and died. It’s very mysterious in my mind. That’s why this record is special to me, because Kevin has a very special place in my heart.

“That’s The Way Love Is” by Byron Stingily
To this day, Byron is a great friend of mine. This song really is a Chicago record. There are few records, like this one, that have really passed the test of time. You can still play it today and draw us to the dance floor.

“Bang the Box” by Matt Warren
Matt Warren did a lot of really good music. I remember playing a lot of it back in the day. That’s why this one spoke to me; you can’t find a lot of these [records]. I think it’s actually a repress. God bless Jerome Derradji for supporting Chicago house!

“Love Can’t Turn Around” by Farley “Jackmaster” Funk featuring Darryl Pandy
We’ve got two records here. The A-side is “Jack The Bass.” This was a nice, down-and dirty-track. On the other side, it’s “Love Can’t Turn Around.” I don’t think there’s anybody in the world who knows house music who doesn’t know about this record. This song was based on Isaac Hayes’s “I Can’t Turn Around,” which Steve Hurley made a version of, and [Farley] was his roommate. It was never released. Then Farley—being who he is—stabbed his roommate in the back, and decided to steal the song and redo it and release it. It became a huge hit around the world. For a lot of people, it was their introduction to house music. This is a very important record to Chicago, and a very important record to house music.

All the people that I’ve [mentioned] here are really important [to Chicago]. It’s a collective. A lot of people might call me “The Architect of House,” or “The Godfather of House,” but it really wasn’t just one person. It was all of us in concert trying to beat out the other guy. It was the competition that really enhanced the production. 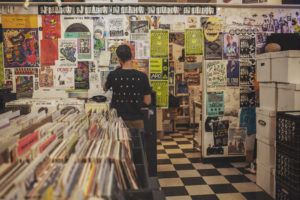