In Phoebe Bridgers’s own words, the songwriting on Punisher spans “real-life plus nightmares imagery.” And often, she reveals that these worlds aren’t so far apart. As with her 2014 debut album Stranger in the Alps, Punisher once again proves Bridgers’s mastery of details. She breathes new life into time-worn songwriting tropes—coming of age, love, loss, family—by documenting their micro-existences in late-night trips to the drugstore, Kyoto payphone booths, and dreamed-up dorm rooms.

Female artists’ songwriting is often described by male critics with catch-alls like “emotional honesty” and “growing pains,” which often serve as dog-whistles for something like, “female artist writes about being sad.” But the specificity and idiosyncrasy of Bridgers’s songwriting elides simple categorization. Rather, her writing betrays a deeper, spiritual unrest. She shows a degree of personhood and consciousness which preempts ascriptions of vague malaise.

As the US once again finds itself embroiled in a nightmare of its own creation, the inherent politicism of this brand of songwriting—exhibited by Bridgers and peers like Snail Mail, Jamila Woods, and King Princess—is ever more clear. Bridgers’s album announcement on Twitter doubled as a call to change: “I’m not pushing the record until things go back to ‘normal’ because I don’t think they should. Here it is a little early. Abolish the police. Hope you like it.”

Before the worldwide protests for Black Lives Matter, and pre-COVID 19 lockdown, Phoebe Bridgers came to Document’s Chinatown office. She discussed songwriting, the pleasures of screaming, and an inadvertent Lil Nas X appearance on Punisher. 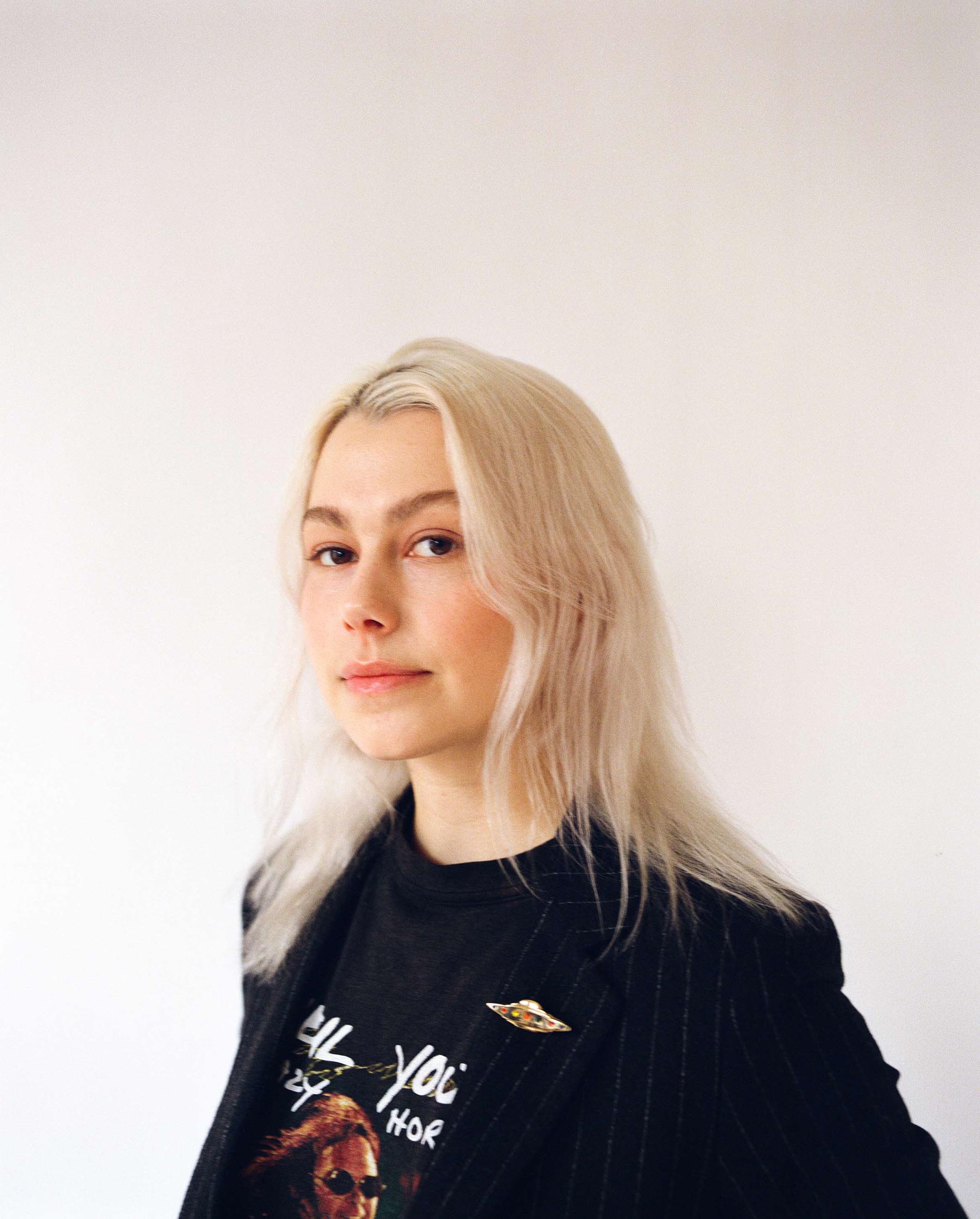 Clara Malley: This is, like, apropos is nothing, but I knew you, ‘Phoebe Bridgers, musical artist,’ and then I knew you on Twitter as ‘traitor joe.’ That took me like a weirdly long time to piece together.

Phoebe: I have drafts, but I deleted social media for a couple days just to see if I could do it. I feel like I have a different relationship with social media because of it. But all my fucking drafts are gone. Although I’m sure it was all trash. I do normally have millions of drafts. Even when I did delete social media, I was drafting tweets in my notes. [Laughs] It was ridiculous.

Clara: I’m sure it’s a different writing process, but do you see [writing tweets] as sort of similar to songwriting?

Phoebe: Some of it is sort of similar. Like, I have deleted tweets because I wanted them in songs. On this record, I have a lyric about pretending to be myself. I deleted that tweet so that I could like put it in a song.

Clara: People throw around ‘emotional honesty’ a lot. I feel like it’s becoming a little bit cliché, but it’s interesting in the context of all that’s happened since 2016—thinking about women in the world with men, writing songs about men. It’s shifting the tone.

Phoebe: Weirdly, I feel like personhood is being normalized. Which is, like, the most stoner-y thought ever, but, you know, like Fleabag. She’s a shithead, and loves men and hates men. The manic pixie dream girl with no personality is dying. You don’t have to put your personality aside to make music now as a woman. I feel like dudes have been able to have both for so long. There have been tons of women along the way who, like, defied the norm. But I think it’s becoming almost in vogue to be a full human being. 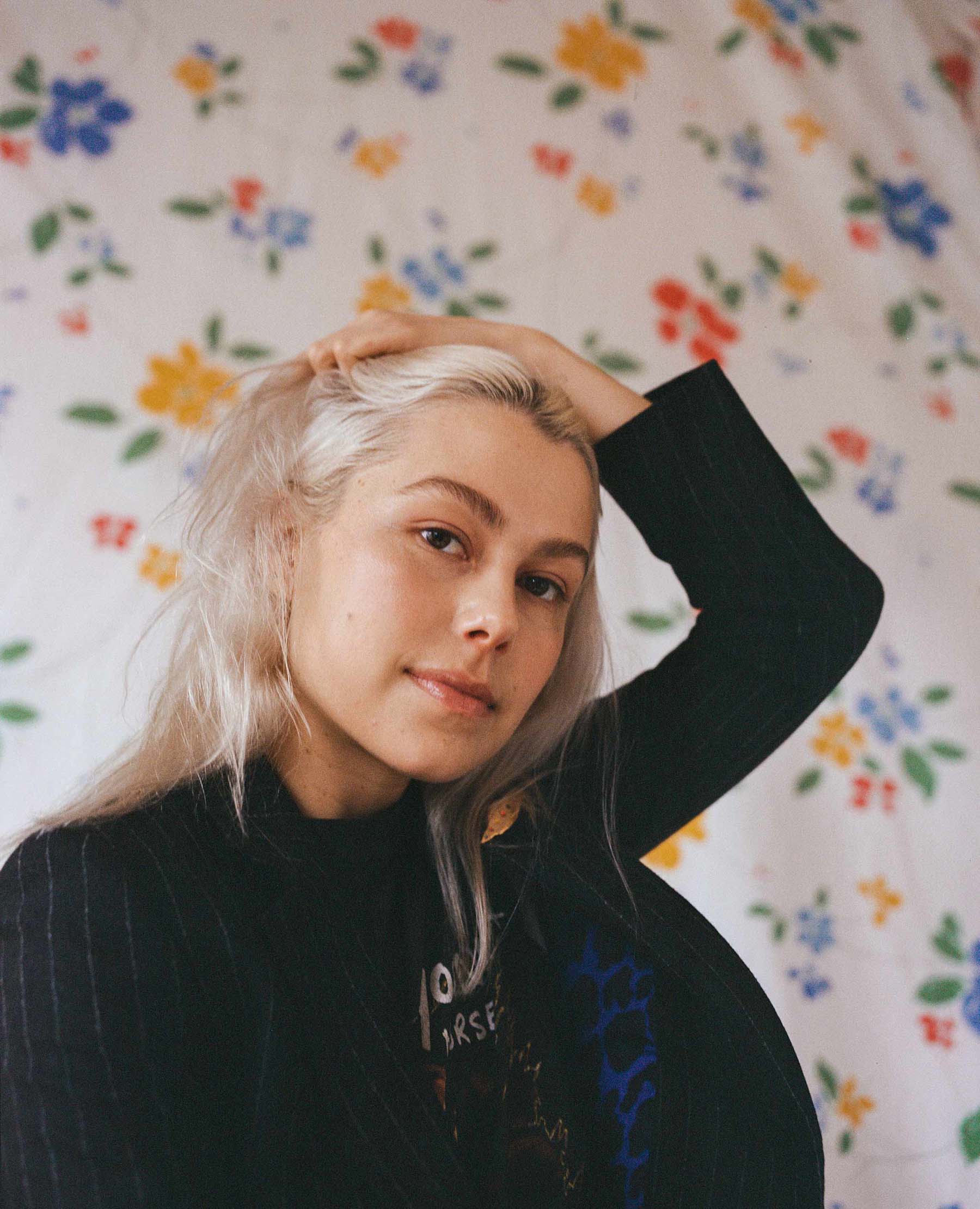 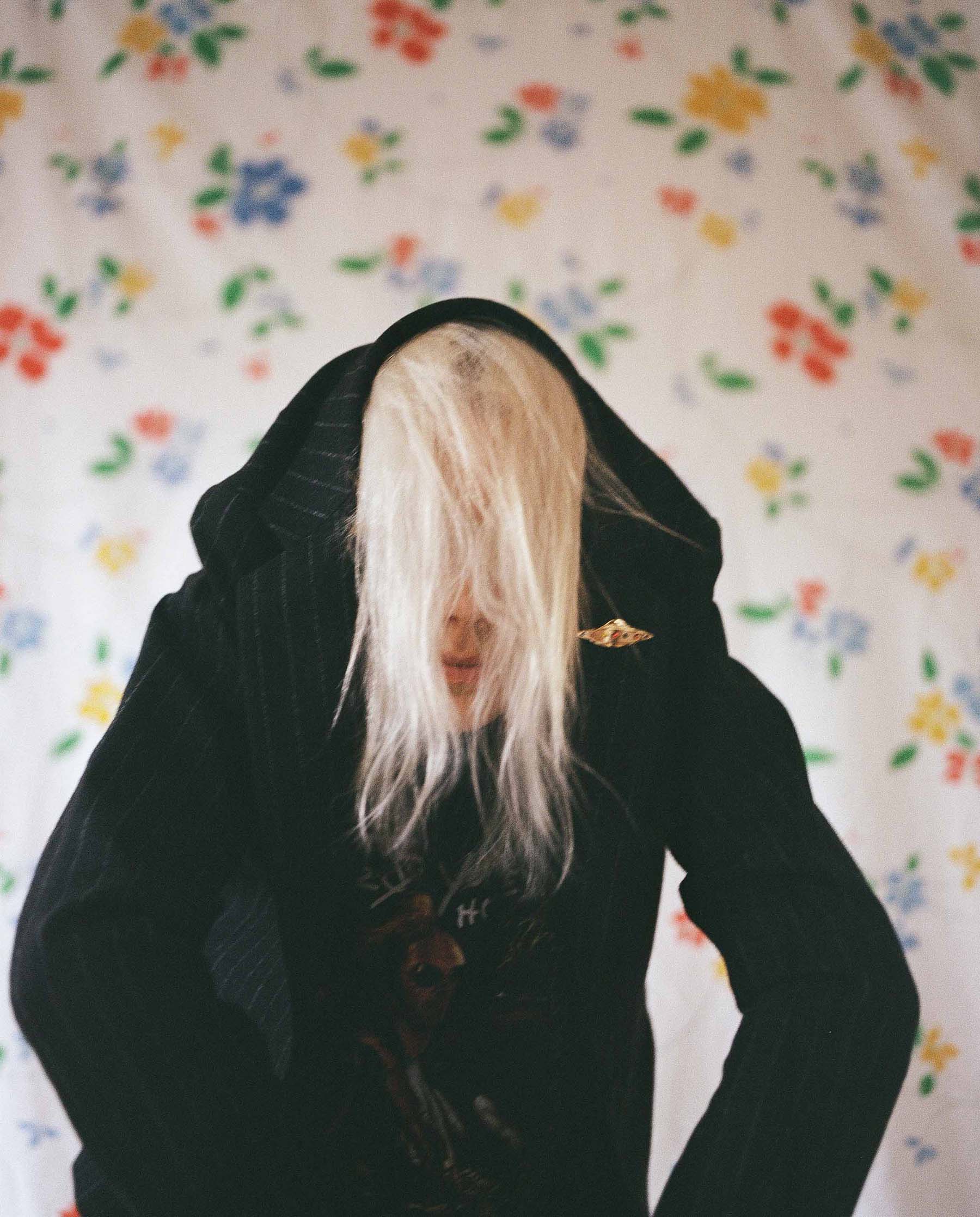 Clara: This is a really bad segue, but on ‘I Know the End,’ is it a Lil Nas X reference?

Phoebe: Oh my god! That’s so right. [Laughs] Oh my God. I haven’t thought about that. No, it actually means the exact opposite. Definitely written pre- Lil Nas X. For a long time, pop-country music has been, like, appropriating rap in this horrible, stupid way, and I was kind of making a joke about that. I used to guiltily love pop-country music, until the election basically.

Clara: Oh, what were your go-tos?

Phoebe: There’s a Jason Aldean song called “Water Tower.” Brad Paisley, Miranda Lambert, even like some Toby Keith songs. After the election I [decided] it’s too real to listen to. It’s like, this is what real people think about.

Clara: In terms of where you pull inspiration from, is country a place that that happens?

Phoebe: Waylon Jennings has a song called “Omaha.” Dude, I was like, ‘Damn, this is a sick song.’

Phoebe: Yeah. I like it, and I hate it. I love the people, but the place is crazy. It’s all banks and steak. Seriously. I went to a yoga class, and there was a white woman with dreads and, like, a giant Chinese character back piece. And I was like, ‘I’m in the wrong area.’ But I love the Waylon Jennings song “Omaha” because I feel like it’s how I feel about Omaha. Problematic relationship. [Laughs]

Clara: A lot of that songwriting is really strong. When you’re writing songs, what is your process like? Is it just, Oh, I like the idea of this story of being in Kyoto at a 7/11?

Phoebe: It’s like magical realism. I was in Kyoto at 7/11, but then half of it is like a daydream. “Garden Song” is like my real life plus nightmares imagery. I feel like that’s kind of the whole album.

Clara: Is that like a hard thing? Or is it cathartic to have it out?

Phoebe: Awesome. It’s awesome. I hate having it not out, you know, that’s the worst.

Clara: Is it the sort of thing, though, that once you are done with it, you’re done—don’t wanna listen to it, don’t wanna think about it for awhile?

Phoebe: Yeah, I don’t listen to my old music for sure. But every once in a while I’ll be playing a show and I’ll be thrown back into my body for some reason. I’m seeing someone, like, hysterically crying in the front row, screaming words. It literally forces me to remember the feelings of the song, even though I’ve sung it a hundred times. 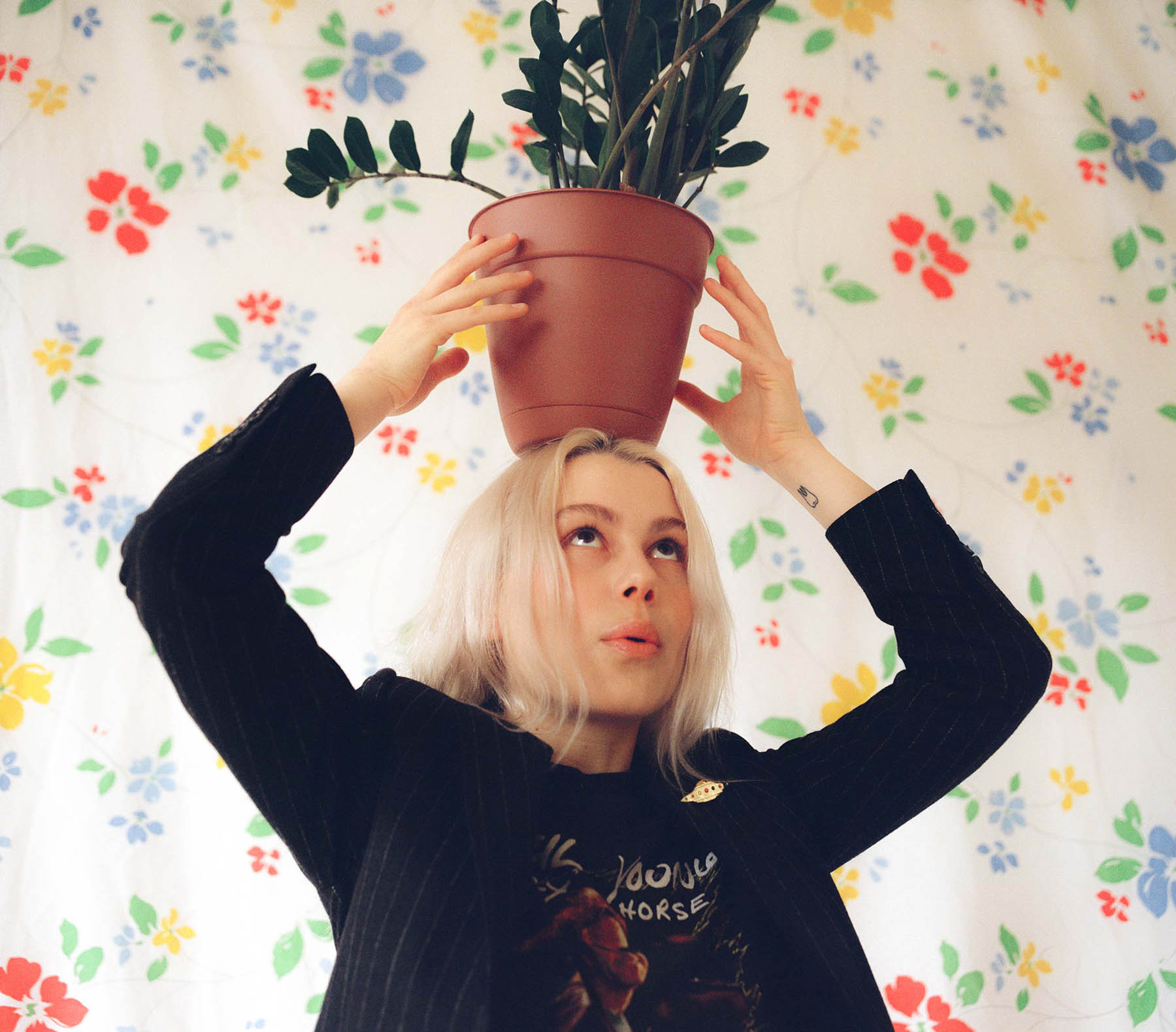 Clara: Speaking of which, at the end of the album, is that you screaming?

Clara: How was it screaming?

Phoebe: I have like an isolated video of it. It’s terrifying. It was really fun. Actually, I asked Conor [Oberst], ‘cause I was really nervous—he screams all the time, but he’s mostly in Desaparecidos—I was like, ‘You have to teach me.’ And he was like, ‘What the fuck are you talking about? Just try.’ I did, and I blew my voice out for three days. It was amazing.

Clara: It was full-throttle.

Phoebe: I made them turn it up too. They were trying to bury it in the background, and I was like, ‘No, I tried really hard. You have to turn it up.’ [Laughs]

Phoebe: I’ll have to save it for shows and have a sample play—a sample of me screaming.

Phoebe: [Laughs] Who comes out for one song.

Clara: Comes out, goes for it, goes back it.

Phoebe: That’s genius. If I have my friends who want tickets for themselves and six [other] friends, I’ll have it be like, ‘Okay, we get this for you, but at the end of the set…’ Wow. I’m gonna do that.