As Document premiers Steele's new single 'I'd Like To,' the Brooklyn-based musicians and friends discuss smoothies, soccer, and growing up in New York City.

If you have been a part of the New York City music scene in the past seven years, or even just observed it from afar, you may know of Steele Kratt. As a musician, he’s been the drummer of The Britanys, the Brooklyn-based boy crew with whom he’s traveled the world, making a name for themselves relentlessly and internationally. As a friend, he’s the charismatic, dog-loving soccer fiend who will always be the best dancer at your birthday party.

But in the last year, Steele has opened the door to a different side of his musical self: his own musical venture. And there lies something more vulnerable, heartfelt, and open than any previous release he’s been a part of. In preparation for his first solo show (Sultan room, November 15th) I spoke with Steele about his new single “I’d Like To” out today, his influences, and his embarkment on a solo career with nothing but promise ahead.

Julia Cumming—What’s going on, how are you doing today?

Steele—Aren’t you going to ask me what’s in the smoothie?

Julia—No, I’m not going to give you the benefit of that question! So let’s begin. If anyone is learning anything about Steele, your relationship to New York City is a huge part of it. You grew up here in the city, right?

Steele—Yeah. I was on Broome street for a little while.

Julia—I would love to discuss your musical experience here. How has growing up where you grew up and witnessing what you did informed your music?

Steele—I’d say that since New York is a microcosm of the world at large, I was able to learn about different cultures and was exposed to a lot of examples of the human condition. I think being able to see so many people living directly in front of you, from a young age, kind of teaches you about equality, disparity, and how circumstance differently affects the emotions that everybody feels. 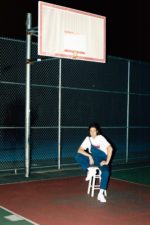 Julia—How long have you been living in Bushwick?

Julia—So it was 2009 when you started? What was it like back then?

Julia—What were you doing in Bushwick in 2009? Where would you hang out?

Steele—Oh, just my house. My mom moved here when I was in 10th grade. We lived off the Morgan stop. She’s still there. And Roberta’s was just a little toddler, you could sit down there. There was that coffee shop Swallow which still has the worst name of all time.

Julia—Very true. Now, if you were speaking to a friend’s mom, let’s say, at a graduation or a barbecue, and she asked you what you had been up to and what your own music sounded like, how would you describe it?

Steele—I’d say ‘Hi!, I’ve been good! Doing some music, doing some sports. Playing lots of soccer, coaching middle school soccer, writing music! Oh, the music? If you’re familiar with Brian Eno’s first 3 records, I’d hope it sounds like those recorded into Ableton and mixed with Sparklehorse and [with] zero knowledge of recording or engineering. Bedroom Eno?’

Steele—Oh, the soccer? I think I’ll be turning pro before I turn 30! 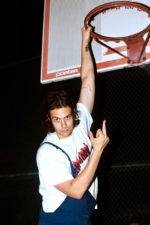 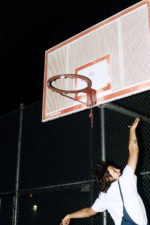 Julia—I love that. What is it about the early Eno sound that appeals to you?

Steele—His guitar tones fuck. I also like how he mixes lots of different instrumental melodies with really pretty vocal melodies despite not having a classically ‘good’ voice. He’s got a lot of different melodic ideas existing together to make a bigger piece, which is something I try to do.

Steele—I’d say that ‘I’d like to’ is about wanting to still believe in the possibility of romance when faced with recurring rejection, and all the various fantasy elements of a potential romance. Damn, that sounds emo.

But it’s usually like if I’m bummed, I’ll write something fully. I can’t really sit down and be like ‘this is the song i’m going to write now.’ But I was off one day, and I had nothing to do, and I was like ‘I’m going to write a song today,’ and I banged that one out. I sat down, did that for five hours, and then went and got dinner with my dad. Then the next day, I just added the actual lyrics onto it. So I just kind of threw it up, and then I was done with it.

Julia—It was instinctual. One thing I like about your music is that you can always hear what each instrument is doing within the track. There’s like a feeling of spontaneity, but without sounding scattered. Do you feel as you are writing that it’s just coming together? Or is kind of that sound an intention?

Steele—No, I think it’s a by-product. I’m writing as I’m playing, so if I think of something that’s cool I just keep it. Actually, I’ve been doing two vocals on all my choruses recently, even though I’m the only one that’s singing. I remember last week I sent a new song to my mom and she pointed out that everything is really busy but it works. She said it’s a representation of how my mind works. And I was like, ‘actually yeah!’ I’ve got a thousand thoughts going at once. And they’re all bopping around. But then on the outside I appear relatively level and laid back. 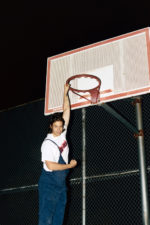 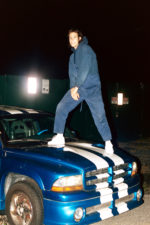 Julia—On a lot of your tracks you have programmed drums, and I’m wondering what that’s like coming from the perspective of a live drummer. What was the decision making in going that way?

Steele—I think that when you’re on a budget, live drums always sound like trash. And I didn’t want to have to learn how to record drums on my own or have to go to studios all the time to record drums. I also feel like you can’t fuck around as much like. Like, if I were to mic-up my drum kit and play a beat, I’d have to figure out the drumbeat, like, exactly beforehand. And I’m writing as I go, so it’s easy to be able to adjust the drums in real-time, or into what I played, or what I’m playing. It’s kind of fun because it makes it like I’m writing music in a way because it’s just all plotting it out.

Julia—You are also in the band the Britanys, who continue to play around New York City. How does it feel to start on your own musical path?

Steele—It’s nice. I have more freedom. I can just plug in my computer when I’m feeling like it. And do some little doot-doot-doots until it’s a real thing. It makes it easier to be in a group with everybody else because everybody wants different things in the band, and it’s all about compromise, and it makes it healthier for me to compromise with them when I got this other thing where I’m doing it all. I also think that when we’re together it’s healthier and smoother now that I’ve got this other outlet.

Julia—Well as people who have both been in bands for a long time we can agree that you’ve got to make the health of the band a priority. It’s like a garden that you have to stay weeding…

Steele—…And you can’t overwater it.

Julia—Alright. If you could be any breed of dog what would you be?

Steele—Greyhound. Or a Great Dane. No, a Greyhound. Because they’re sleek, they’re fast, they’re nice. They don’t actually have that much energy, despite loving to run. But I think I’d probably present like a Golden Retriever.

Julia—I think that’s very true. If your soccer team had a mascot, what would you want it to look like?

Steele—Yeah, kind of like Mr. Met but a soccer ball…

Julia—Yeah, that’s what I imagined actually. But I couldn’t leave this interview without fully mentioning soccer.

Steele—We could keep talking about it. We’re joining a new league next week, and we’re gonna get crushed. It’s the hip league of NYC. It’s like, Kith has a league in it and they have fancy jerseys.

Julia—I see. Well, I wish you luck in destroying all their high fashion asses! 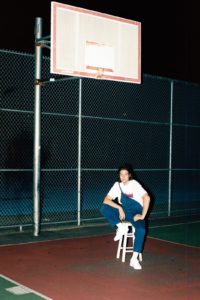 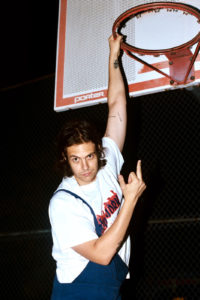 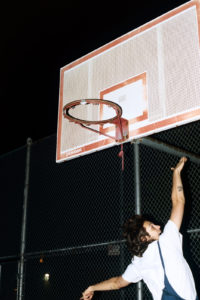 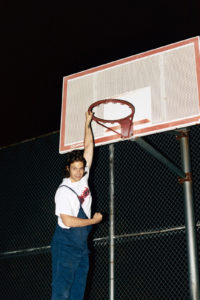 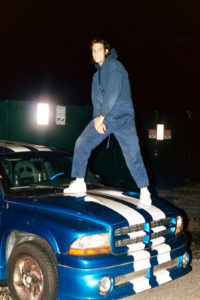