‘I do what I do, not for you’—the artist speaks to Document about creating defiantly personal art ahead of her performance at Red Bull Music Festival Chicago.

When Woods spoke between songs, she spoke honestly: toxic relationships, unwanted probing questions (“are you mad?”), and family histories. She called upon the minds of James Baldwin, Jean-Michel Basquiat, Octavia Butler, each of them teachers and inspirations, to join her on stage in spirit. There are elements of autobiography, but she does not lay herself bare. The window into her world shows us what she wants us to see in a testament to the subversive power of defiantly personal art.

Document spoke to Woods ahead of her set at Red Bull Music’s Chicago festival to discuss the piecemeal process behind the album’s creation, “unraveling” her album with this performance, and how teaching poetry has informed her practice.

Clara Malley: I wanted to start by asking you, it’s such a specific concept for an album; where did the idea come from? Was it something you’d been kind of mulling over?

Jamila Woods: Well it kind of came organically, after my first album I was just trying to write new songs, and the first song that I wrote was ‘Giovanni,’ which just came from giving myself a prompt, because a lot of times when I’m stuck I’ll just try to do a cover of a song and make it my own.’ It was a poem in this case: Nikki Giovanni’s poem called ‘Ego Tripping.’ I had given my [poetry] students an assignment to do a cover of a poem, and so I was like, ‘ What if I did that but added a song?’ So that was the first one.

Then, I kind of just played a game with myself, like how many songs could I make named after people, but not with approaching it the same way. ‘Frida’ came soon after that, and then after I had a few, I had an older song called ‘Baldwin’ that I had been trying to put on my first album, and it didn’t work out. So after I had a few I was like, ‘this is kind of like a pattern, what if this is like some little EP that I’ll do?’ But then it kept growing bigger and bigger.

I came across this poem [‘What will your legacy be?’] that I knew already but I had forgotten about by Margaret Burroughs. [A quote] ‘Legacy! Legacy!’ was actually a print that my friend has at his house, and I was at his house, and I looked up and I was like, ‘Oh my god, that’s the title of the album.’ It’s not just songs titled after people, it’s really this deeper project of trying to write songs that are self portraits through the lenses of these different people and what they taught me; almost like that saying ‘you have to look back before you go forward.’ I really felt that in my process after doing my first album, doing like an excavation of all my influences and inspirations and seeing how they’ve made me the person and the artist I am.

Clara: The album is such a whole and layered piece of art. I just feel like it’s something that we’re starting to see more and more, like with Solange’s albums as well as someone like Tierra Whack who’s also playing the festival. I hate the term ‘concept album’ but it’s clear that these albums are meant to be one whole piece of art with a narrative, a unified, cohesive evolution rather than singles patched together.

Jamila: I think for me, I come from a poetry background, so ever since I was just trying to make chapbooks—those poetry books, you print it yourselves at like Kinko’s or something—I always think about it as a collection. I didn’t know what I was doing making an album. I was just going off of the genre that I worked in before. Just the way my mind works, I just like there to be cohesion and a language that develops, or a world that develops. I also used to do a lot of theatre and dramaturgy work where everything in the world has to be consistent. If we’re set in the ’70s, the clothes, the language, everything has to all be of the same world. That’s always how I’ve approached projects, and I can’t help it. I kind of admire people who can just like, put out singles that way, really cool. But I naturally gravitate towards wanting to build a world with whatever project I’m creating and have it be something you can ingest, hopefully want to ingest, as a whole, even though the parts should stand on their own, too.

Clara: Is there any aspect of the show you’re particularly excited for, just in terms of the interdisciplinary of it all?

Jamila: Yeah, I was telling my friend, I like it when it feels like all the different parts of the work that I do can be showcased, integrated. I always talk during shows, between songs, but this time it’s going to be, like, unfolding the album—giving a little bit more story behind how I made the songs. Having a dedicated time for me to talk about those things feels like the stuff I do when I’m teaching. I also rearranged all of the music so it’s going to sound different than if anyone has seen the tour. It’s a lot more stripped down and doing a lot of sampling. For example, for ‘Eartha’ we were listening to Erykah Badu’s ‘Back in the Day,’ when me and the producer were making it. He was listening to those drums, so we kind of interlaid the ‘Back in the Day’ bassline in ‘Eartha’ so it sounds totally different, has a different vibe to it. All the things that I love about the process of making this album, I get to do some of those things on stage. Pretty cool.

Clara: Do you think your experiences teaching have kind of informed either how you interact with the audience, or how you approach making an album?

Jamila: Definitely how I approach making an album. I don’t feel that so much when I’m performing, like how I interact, but I think even how when I get stuck I make prompts for myself. If I’m saying to students, ‘no such thing as writer’s block, you just have to write something,’ I have to practice myself too. That definitely influenced my process and also how I learned a lot of things through listening to music, l particularly hip hop. So if a name got dropped I’d be like, ‘Who is it?’ and go home, look it up. I also think about the young people that I worked with as a main audience in terms of like [whether ] they going to think this is cool. I play it for them first and see.

Clara: What does it mean to be doing this show in Chicago, in a place that I think you’ve done community work?

Jamila: Really just working at a non-profit. People call me an activist and stuff, and really I was just working. I really respect activists; I don’t consider myself one. My friend Krista Franklin who made the [‘Legacy! Legacy!’] print I ended up seeing, she wrote this amazing liner-notes type introduction to the show. She really contextualized the show, like Margaret Burroughs is a poet and artist who’s from Chicago. Even though this album isn’t as Chicago-centric as my first album, I think it’s interesting that the title ended up coming from a Chicago poet, who had this poem [telling us], look at these amazing black people who have come before you, and the legacies that they’ve created that you’re living in. What will your legacy be now? My project was kind of an answer to that question. I just feel like this is the place where I can do whatever I want because ever since I was just doing stuff on open mic stages, it’s [been] a very receptive audience. So yeah, I’m excited about it. 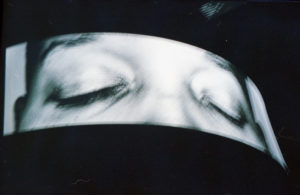 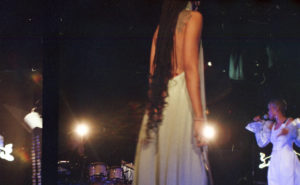