The Parisian techno maverick is pursuing organic social connection and carefree fun, but not at the cost of quality

Does a piece of music need to be heard to matter? For every insular artist obscured by their own self-doubt there are a thousand populist self-promoters who rose to prominence by catering to mass appeal. Jeremy Guindo calls this “the paradox of music.”

“The whole paradox of music is that you’re not doing it for others, but you always need the music to be alive,” says the Parisian artist known as Bambounou. “If you do the most amazing, banging track and it sits on your laptop, it doesn’t exist.”

Guindo’s take on club music flirts with experimentation and immediacy. He’s never veered into outright self-indulgence, but his polyrhythmic expressions playfully subvert the lowest common denominator pitfalls of modern techno and bass music. Even in his most experimental moments, there’s a tactile, approachable quality which draws people in rather than pushing them away.

“It’s very important to find balance,” he states as we connect over Zoom. “It’s like how you draw a line between the audience and yourself, or what you feel like is done, and what’s not done.”

We’re already deep in the reeds reflecting on the creative process and the trap of perfectionism. The sound of Bambounou to date has reflected a personality open to possibilities, even if it is dressed up in elegant sound design and crystalline, modernist pulses. His sound never feels like it’s overwrought, but rather springs from the flash point of inspiration without getting bogged down by over-analysis. As if to prove the point, on more than one occasion Guindo punctuates his internal decision making with a cartoony, “Alright! Let’s go!”

“I like the idea of releasing unfinished tracks,” he adds. “You never know when a track is perfect.”

It’s not all flippant gestures and throwaway tracks in the Bambouniverse, but Guindo is purposefully trying to embrace openness and freewheeling creativity with his new label, Bambé. As well as needing the pause of lockdown to ignite his long-held ambition to run a label, he also wanted the contradictory challenge of launching a club music label in a party desert as an impetus to think differently about his approach. It’s certainly not a reinvention, and the first release, Cascade, is a Bambounou record first and foremost, but it also features something different in the form of “Up A While,” a three-minute vocal track featuring Manuel Hildebrand.

“I wanted to have a bit more of a pop approach,” Guindo explains. “The track is quite short and there’s some big cheesy vocals that don’t mean anything, because it’s mumbled. The melodies and everything sound like some Italian techno, the synths are a little bit trancey.”

It would be easy to take Guindo’s explanation as a nonchalant shrug about the track and its component parts, but his tone communicates excitement and enthusiasm when he talks about it. Rather than creating a lofty concept around this foray into short, vocal-led production, it’s more like an experiment which delivered a great result. 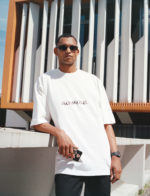 “I just found Manuel by luck through my graphic designer,” he explains. “He just sent me some voice notes of him singing into his phone. I put the track together very easily just using those, and I even did a studio session with him when he was in Paris, but we recorded the voice parts and I was like, ‘Nah man, the first take was the best take. Sorry you came all this way.’”

Guindo shuns the idea that including “Up A While” was a statement for the way Bambé will operate, in the same way the follow-up releases are simply the things that feel natural to him at this point in time. The second 12”, which came out in late July 2021, was a collaboration with Bristol-based artist Bruce. When the record was announced, I was taken back to a chance run-in with the two of them after a club night in Bruce’s home town, where the chemistry between them was evident as we joked in the street in the limbo between the rush of the club and the roll of the after-party.

“Larry [Bruce] and I played together for the first time in London quite some time ago,” Guindo recalls. “We knew straight away we were going to be friends. I asked him to do an EP for me, but he was in Paris, and I had my studio back then. I was like, ‘Hey, come to the studio and we will start something.’ We got it going over two days. Larry is very particular, but it was all very organic.”

Likewise, the next release on Bambé similarly spawned from a social interaction. The French artist Gigi FM is less established than Bambounou or Bruce, but the dancer-turned-producer possesses an intuitive spark as a DJ and musician which instantly inspired Guindo after he met her at a gig.

“I would say [Gigi] does some kind of astrological techno, very influenced by energy and everything around us,” he explains. “She only started making music quite recently. Everything is still very fresh, but also has a maturity that is sometimes confusing, because you wouldn’t expect her to be so good already. She has a deep connection with music, you know?”

The freewheeling energy of Bambé, which feels more rooted in Guindo’s sociable interactions than a specific musical direction, harks back to the early days of Bambounou. Guindo made his name quickly in the post-dubstep years, when the stylistic shift in UK club music started to impact internationally. In Paris, a vibrant variation on fractured, bass-heavy dance music emerged with the ClekClekBoom label as its nexus, and Bambounou was a central part of it.

“I can’t help but think I was having much more fun back then,” Guindo admits. “It’s really strange, and I don’t know if it’s good or bad, but everything was so free, so easy. Before it was just like, ‘Hey! Let’s do a track. Bam! You have a track now.’ Now I’m thinking, ‘Okay, I like this kind of music. I like this approach, I like these sounds. How am I going to make it an interesting enough track for me to like it, and then eventually release it?’ That’s something I’m trying to lose a little bit, and just do whatever I want, and try to enjoy it.”

It seems like this more impulsive, relaxed way of recording and releasing his music is a natural way for Guindo to operate. Openness is intrinsic to his way of being, music or otherwise. The first time we met in Vietnam, he made a signal because he recognized the label on my t-shirt. At the night market, he ordered every kind of shellfish on the menu and endeared himself to the local chef. At the festival, he comfortably spun back to back with Peggy Gou, tempering his knotty, rhythmic intensities to merge fluidly with Gou’s more melodic house style.

Crucially, in these moments and across his collaborations on Bambé and elsewhere, this openness doesn’t come at the expense of the quality. Great taste lies at the heart of his creative stamp, but it also thrives off the energy of the people he interacts with. It’s an energy he’s recently reconnected with as a DJ as he steps back into a tentative gig schedule. Like every touring artist, Guindo’s life was cast adrift when nightlife shut down globally, and as a parent he took on a full-time carer role for his children during a brief sabbatical from Paris to the South of France. In the many-layered lifestyle shift, he adopted a new working practice for making music which capitalized on any snatched amount of time to create as opposed to long, relaxed days in the studio tinkering with sound and equipment. With the hard reset, he’s returning to gigging with a more selective attitude, but the lure of his hometown, Paris, was too much to resist as restrictions eased. “I like beautiful things,” he says matter-of-factly about the decision to move back.

In line with his appreciation of beauty, Guindo’s past releases hinted at some affinity for art direction. The sleeve designs on his releases for labels like 50Weapons, Disk, and Whities (now called AD93) suggested he had some strong ideas about how music should be presented. As ever, Guindo’s own laissez-faire attitude subverts our expectations.

“I wasn’t caring at all,” he reveals. “It’s worse than that, I wasn’t even understanding anything. Now, with the label, I’m working with one Swiss designer called Dimitri Erhard. He’s very talented, and still very young, but he has so many good ideas and I let him do whatever he wants, because he’s a student. He knows what’s going on, he has good taste. I sent him something, like, ‘Hey, do you think it’s cool?’ And he was like, ‘Man, these colors have been used two years ago, they’re not cool anymore.’ I like this approach of having someone who knows what they’re doing.”

From the visuals to the sonics, Bambé is the project at the forefront of Guindo’s creative focus right now, but he doesn’t swear off working with the other platforms that have carried him in the past. Bambé might be a self-defined, self-indulgent project in some way, but it’s also an extension of Guindo’s openness with the world and people around him. Interaction beyond his immediate circle is still a vital part of Bambounou.

“I really don’t want to close myself,” he says, “especially now, in these times. If you forget about all the people you’ve been hanging out with, you’re just closing doors to meeting new people, new opportunities. I feel like we stayed alone for so long, now we need to open it all, and that applies to emotions and everything. So I’m opening everything, opening every door.” 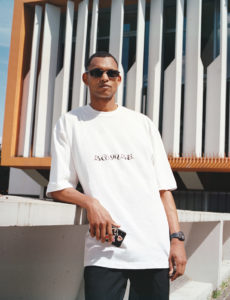