In the era of social distancing, heaven is a pixelated hot tub and having at least four girlfriends.

From the human years of 2008-2011—I was 14-18—I played only one Sims family. The Maes started with Sammy, a single dad, and his toddler, and ended with a married lesbian couple who had five children. I did the math once, and deduced that the final lesbians must have been Sammy’s great-great-great-grandchildren. They were also definitely adopted siblings. Questions of basically incest aside, the Maes transitioned from a small unit to a giant one because I didn’t want them to be starved of intimacy—it’s difficult to keep Sims socially satisfied outside of their immediate family unit; adopting a ton of kids doesn’t translate to legitimate relations. They are instead considered friends, and can develop into lovers if they belong to the same generation. Beyond the game’s problematic oversight, I wanted to challenge the notion of what a family could look like. I grew up with lesbian parents, so it was intuitive to diversify the experience beyond a single cis man and his son. But it was also the first time I built a queer community that was explicitly mine, that still reflected the world I had grown up in: a sprawling, intergenerational network that only stopped expanding when the family iMac finally died in the study.

Most of my generation has a relationship with The Sims, typically beginning with its original incarnation in 2000 and petering out somewhere around The Sims 2 or The Sims 3, which came out in 2004 and 2009, respectively. (My own obsession peaked with The Sims 2.) Unlike many of my peers, however, I found no pleasure in building extravagant houses, or placing my Sims in precarious and fatal situations, like sticking them in a pool with no point of exit, or intentionally setting them on fire. My version of playing God was honing in on the mundanity of their simple little lives. They bathed, worked, slept well, and the small pockets of time they had left were for recreational activities and bigger picture aspirations. I never hit ultra-speed; watching it unfold in real Sim hours provided me with the most innate and calm pleasure. 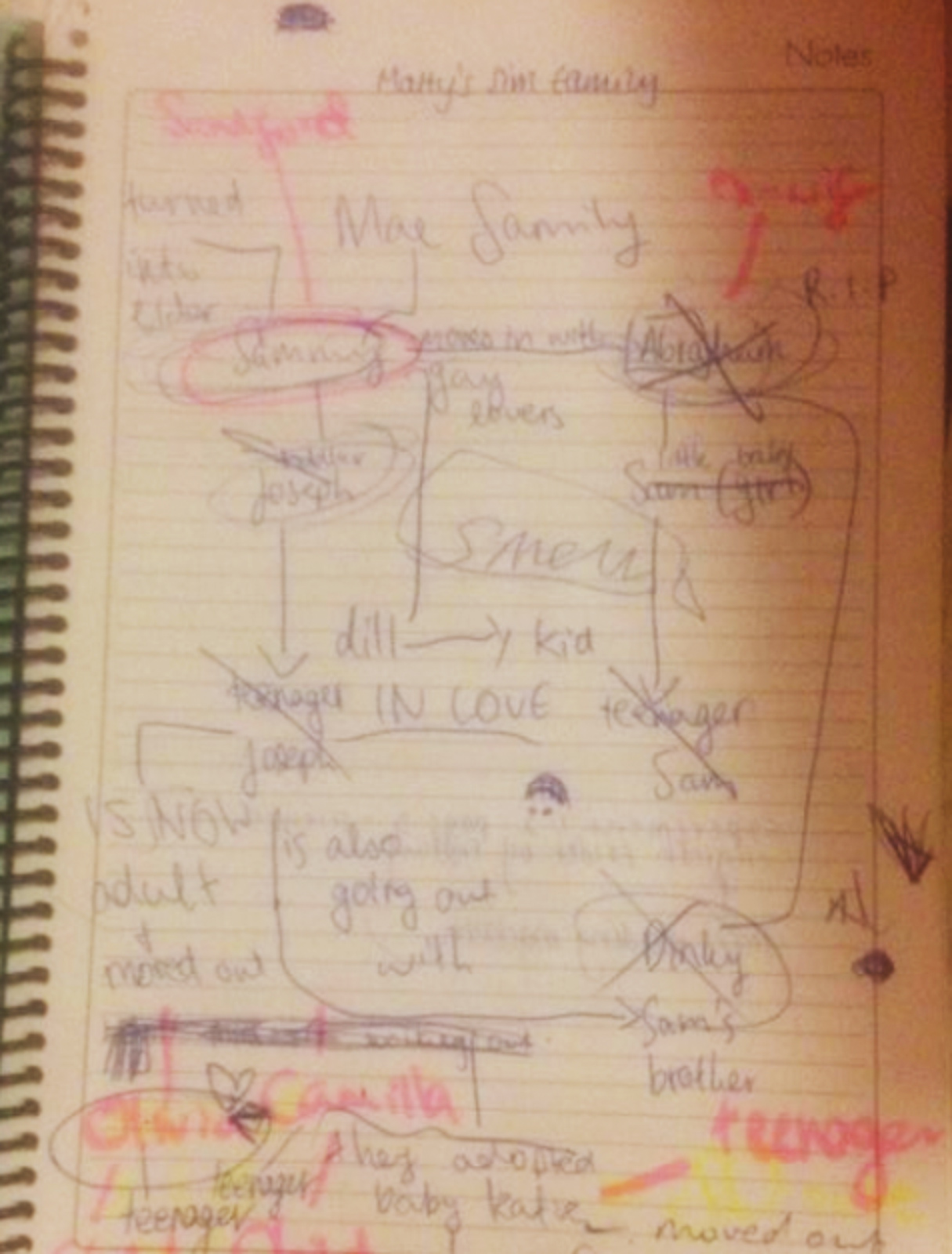 The original Sims dynasty, as captured by a camera phone in 2008

I am certainly not the first person to return to The Sims as we face our new COVID reality. It scratches an itch that makes total sense for the moment: a desire to exact control and freedom in a way that we took for granted. It’s also a perfect form of escapism. The first night I played The Sims 4—the newest version of the game, released in 2014—was the first night I hadn’t felt worried about the present moment, or even the future. I was entirely immersed in another world.

My strategies have changed, if only a little. I stick to my typical methods of ascribing mundane routines to my Sims, finding it way more of a thrill than usual to watch them flirt with their neighbors (!) and go to the gym (!!). The Sims 4 offers a greater depth of experience that caters to my gameplay. Sims aren’t just in the green, yellow, or red anymore; they can feel inspired or focused, and the ability to curate their personalities with greater nuance means that mopping the floor isn’t a universally disliked task. (I endeavor to make sure all my Sims love cleaning.) The main point of difference is that I am less interested in creating family trees that endlessly sprout new branches, in part because of the newfound sophistications of the game, but also because of my evolving impressions of what a family can be. I feel compelled more than ever to create a virtual queer community now that I am stripped of my real one, and my transposition of that into a simulated world looks very different than it did nine years ago. 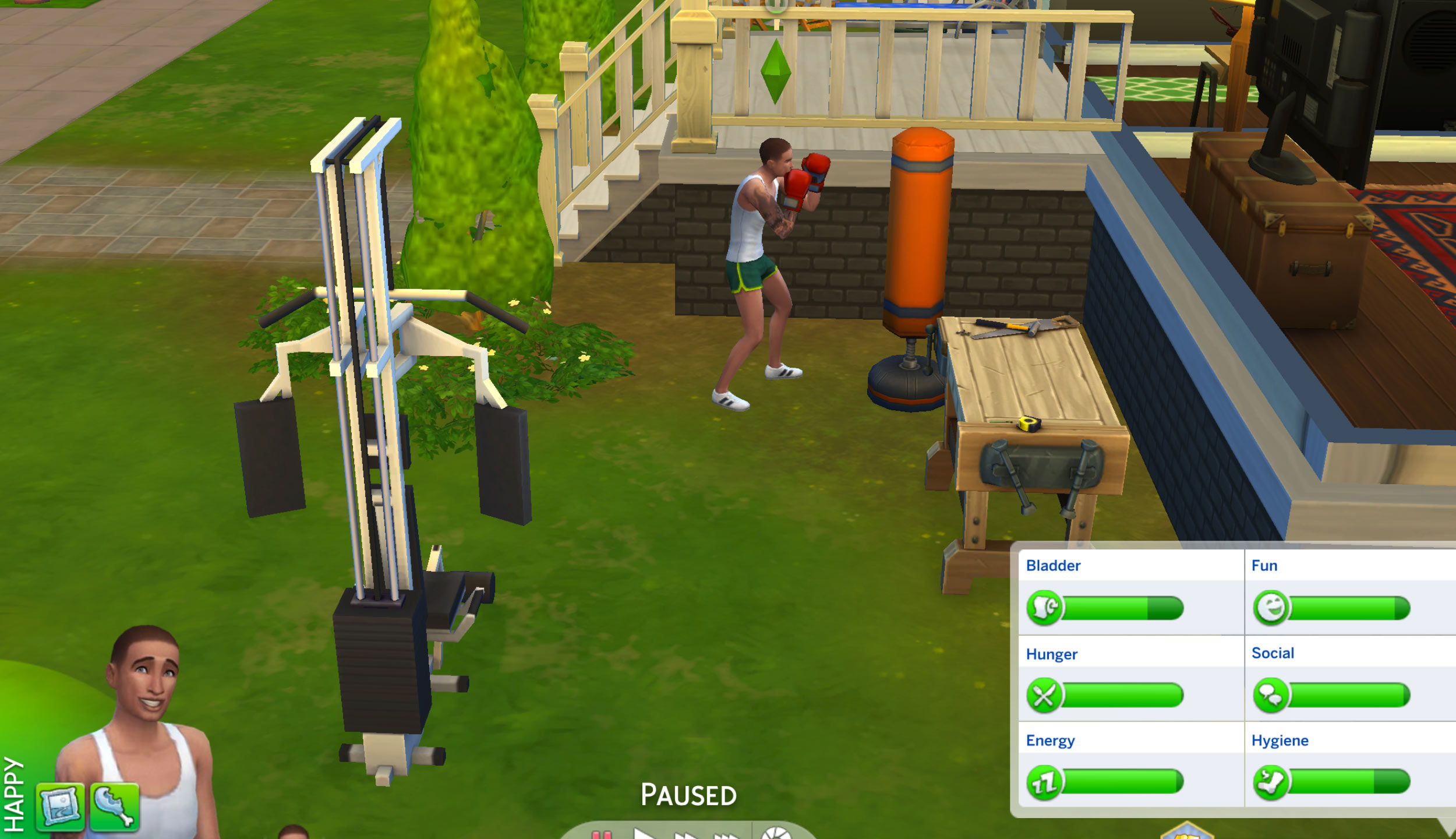 The first family I built consisted of my partner, my roommate, and myself. These are the only people that I am able to still see regularly during the pandemic, but I moved us out of our small Brooklyn apartments and into a three-story Victorian in the desert. I may have kept my avatar a little too close to the real me (a stay-at-home writer) but my roommate (a writer and teacher, usually) quickly reached the higher ranks of the business career and practiced études on the grand piano in her spare time; my partner, a teacher by trade in reality, was a private detective, a testament to her scrupulous and thoughtful nature. I continued to seek delight in cooking for the house, but my meal selections weren’t informed by the slim pickings at the local bodega. I could open the fridge and make cioppino or lobster tortellini, and then the three of us could slip into the hot tub in the backyard to digest. One of the great pleasures of The Sims has always been placing real-life loved ones into more luxurious circumstances, but it is especially heightened in the era of social distancing. Playing this way felt like an escape, but it was also tinged with melancholy. Our limitless options proved almost too much of a reminder of our limited reality.

I find that I can enjoy The Sims best when I create fictional characters that are abstractions of a broader queer community. It’s a community that I pine for generally; a community that, with the cancellation of Pride, feels egregiously out of reach. Building people from the ground up—choosing their aspirations, aesthetic, and appearance at free will, with no real counterpart to base them on—is the truest form of immersion for me, an opportunity not to situate my loved ones in a non-COVID world, but to situate newly created people in a world at all.

I’ve become quite attached to the Princes, a cute married couple who live in a small one-bedroom even though they could afford something much bigger. (Leo is a startup entrepreneur and rocket scientist on the side, and Alex is a celebrity chef; they’ve aged from young adults to ‘elders’ since I built them.) The Princes have an open marriage, but even The Sims 4 doesn’t allow married Sims to flirt without the other getting jealous (a glaring omission). I want them to stay true to their values nevertheless, so their otherwise happy union is tainted by a few risky dates. The spurned Sim then experiences 24 hours of feeling “incredibly angry.” (What this looks like: crying it out in bed, a pep talk in the mirror, kicking the trash.) I also regularly play Dylan—obviously named after Drew Barrymore’s Charlie’s Angels character—who is an androgynous, currently unemployed womanizer with at least four girlfriends. 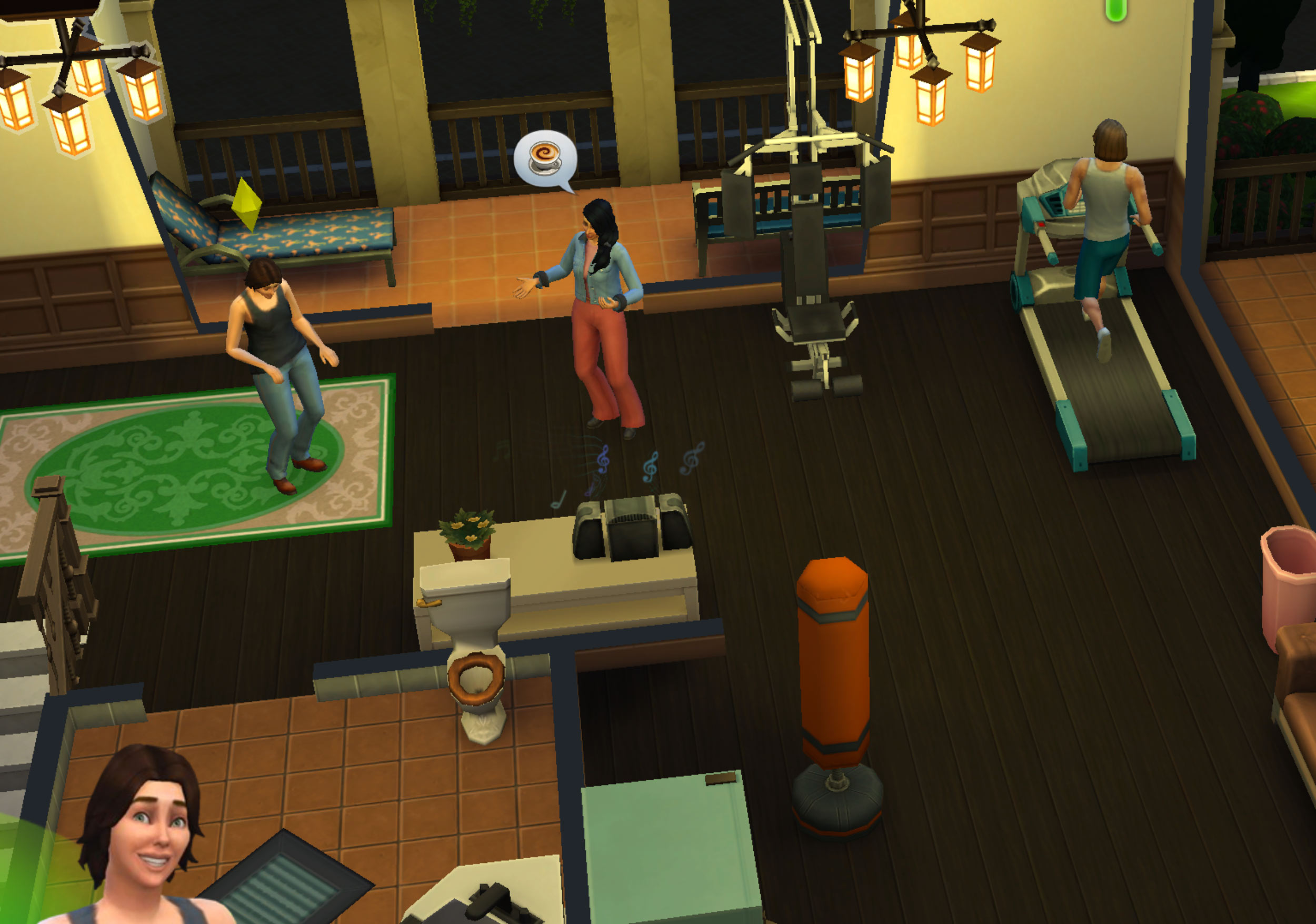 Perhaps my interest in creating these fictional narratives stems from a general pathology of being a writer; here I am, literally world-building, a concept discussed at length in the writing workshops I’ve attended. In light of the moment, though, it feels more specific than that. The Sims that provide me with the most comfort are an embodiment of something simpler than our current experience, and I will continue to exist inside their made-up worlds, gratefully detached, until the real world has something better to offer. 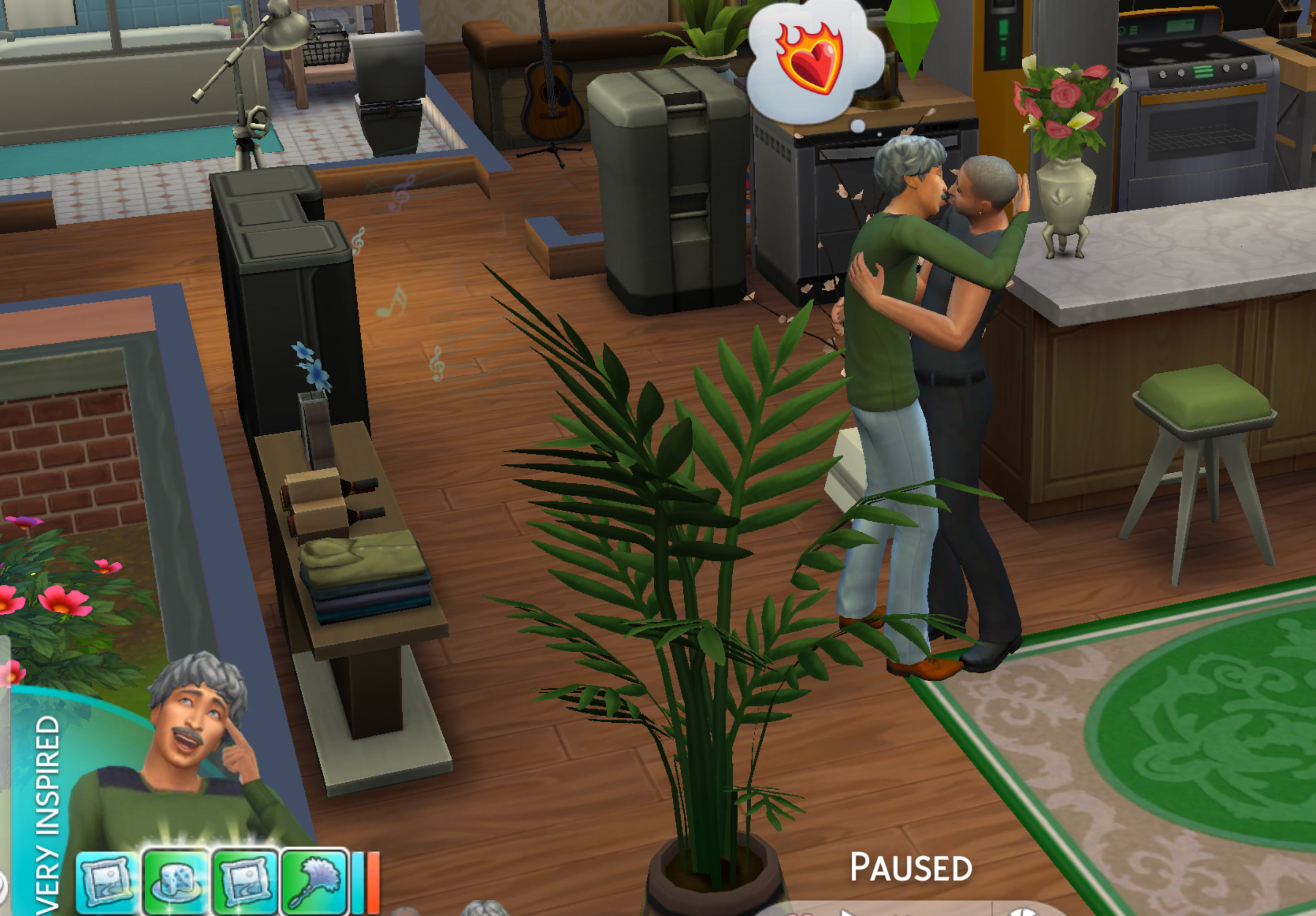