‘High School’ inspires Matilda Douglas-Henry to meditate on her own memories of sleepovers, secret love letters, and the agonizing weight of queer desires.

I find that I am thrilled and trepidatious in equal measure when I encounter a new queer text, especially one that has been receiving good press in anticipation of its release. I hold queer artists to a higher standard, obviously, because we are superior beings, but what proves most difficult in tempering my expectations is that I am always looking for a part of myself reflected back at me, within the pages or on the screen. It’s part of what makes the queer experience so special: there is a ubiquity to how we relate to the world that doesn’t extinguish the lucid originality of our personal narratives. Todd Haynes’ Carol physically pained me when I first watched it—not because I can relate to navigating queer attraction when I have a straight male fiancée, but because of how the film compounds an act of watching with an act of desire. As I watched Therese watching Carol, either with her eyes or through her camera lens, I remembered the first girl I was attracted to, and how I looked at her, and it was as if I had only just realized what looking at someone was supposed to feel like.

When I learned that Sara and Tegan Quin, the queer twin sisters who make up the pop duo (you guessed it) Tegan and Sara were releasing a memoir called High School about their teen years—with positive reviews from Michelle Tea, Carmen Maria Machado, and other LGBTQ+ icons—I was eager to read it. My queer coming of age began around the tailend of 2006. “Walking With A Ghost”, Tegan and Sara’s 2005 breakout hit, was my MySpace song, and I did a lot of “Which L Word character are you?” quizzes (I was participating ironically, I would tell myself, but I’d nurse genuine heartbreak if I was a Tina rather than a Carmen or Alice). Their 2007 album The Con was a painfully accurate soundtrack to how misunderstood and angst-ridden I felt then. I was a tall, awkward tween in a romantic relationship with my female best friend at an accepting liberal arts school, but was still overcome with self-hatred. I was unwanted and alien, perennially misplaced, and refused to talk about any of my feelings with my family. For these reasons, high school was conflictingly oppressive and emboldening for me, charged with joy and agony.

Qualities of otherness and isolation are teen queer canon, of course, but I was surprised to find them in me because I was raised by two women within their inclusive yet intimate lesbian community. I’ve subsequently spent most of my writing life considering whether a pervasive sense of shame is inherent in the queer experience no matter how you grew up, and I was interested to see whether the Quins’ experience of high school in Calgary in the mid-90s would be at all similar to my own in Sydney, Australia in the mid-2000s. I wondered if they quietly came out at a similar time, and having each other was all the support they needed. I wondered if maybe, no matter how sure of themselves they felt, they were drowning.

I had set out to find some common ground, but even still, reading High School was wildly uncanny, weird and eerie in its execution; not only in terms of the subject matter, but in some instances whole paragraphs of thought and even individual sentences were mirrors of sections of my recent graduate thesis (a memoir). I saw myself entirely in Sara, whose romantic relationship with her best friend Naomi at the beginning of high school paralleled the sobering intensity of my own. “We exploited the intimacy acceptable between girls of our age with sleepovers every weekend and marathon phone calls that stretched into hours each night after school,” she writes. “But despite the pleasure of it all, my feelings were far from simple.”

“Sleepovers were where I slipped around the bodies of other girls for the first time as we innocently spooned,” I write in one of my thesis chapters. “Somewhere below my abdomen I would get little contractions of excitement that pulsed down through my legs. I assumed this was how every girl felt when they got close to their female friends.” When Sara and Naomi finally kiss, Sara excuses herself to the bathroom to throw up. After my first kiss with a girl, I wished for “a world where I didn’t have to deal with the reality of these feelings, because as soon as we kissed, the clarity of the situation fell down on me hard.” Then there are the same recurring motifs. It’s like Tegan and Sara and I share a mutual prose code to connote a positive transformation. We endlessly talk about aesthetics, the clothes we wore, and the hair we had. “I wanted to be seen,” we write, more than once. Sara hides her love letters to Naomi within the hollowed-out insides of an old stuffed animal; I gutted a Care Bear to create a secret compartment for illicit things, like a Swiss Army knife and cigarettes, and the weight of my queer desires.

Beyond the surreal similarities within the writing itself, I saw the joy and agony of my high school memories in Tegan and Sara’s story. There is an indisputable narrative that reflects their high school years as being defined by fun parties and cool friends, hard drugs and diverse sexual experiences, and the discovery of a burgeoning artistic voice that they harnessed and turned into music. Unspooling alongside these reflections, though, is a narrative where, in spite of those things, they were startlingly alone, both attempting to navigate the heavy reality of a specific queer identity when they were conditioned to think that they “like boys too.” This was a line repeated to them by almost every girl they kissed. I recalled my formative glimmers of intimacy, and heard that same phrase uttered to me on at least three separate occasions, in my teenage bedroom or awkwardly typed out via text. I buckled in on myself then, convinced that the feelings I had for these people couldn’t function in earnest.

Tegan and Sara had each other to talk to, in the same way that I had my parents and my sibling, who is also queer. But like me, they couldn’t own those feelings; they couldn’t actualize and share them, and turn them into something that would be more defining than a single moment. “I knew both Mom and Tegan were trying to figure out what was going on with me. But the harder they looked, the more I wanted to retreat,” Sara notes as she begins to understand her feelings for Naomi. I see so clearly my messy and internalized teenage shame: the open dialogues my family would attempt to initiate with me about the reality of my relationships. I was compelled to lie, so I lied until I had even convinced myself. It is an electric kind of wonder to realize how acutely a queer cultural artifact can resonate across generations; that it can defy space and time, and be a reminder of how far you’ve come, even if you didn’t know you needed it. A safe little world is made for us in the cracks of the spine and the well-worn pages.

High School is not a perfect book, but it succumbs to traps that I recognize in my own writing. It’s easy to lose sight of Tegan and Sara amongst their rotating cast of friends. Their revelations around identity can seem too tied to the chronological developments of their relationships, which was the same feedback I received for my thesis: that my work was almost inextricably interpersonal, and my desires were hard to understand outside of my connections. I have always struggled to understand myself outside of my community, which may be a symptom of living an entire existence within shifting queer spaces. I will continue to search for my distinctions within familiar worlds, and locate my uniqueness within a type of ubiquity, wanting to be seen. 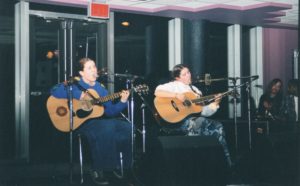 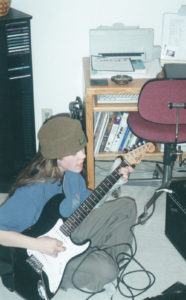 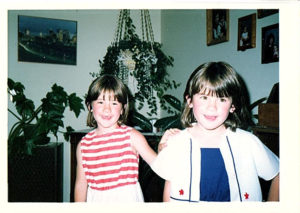 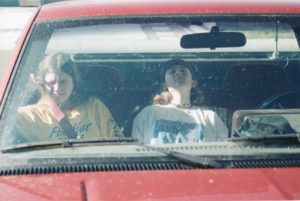 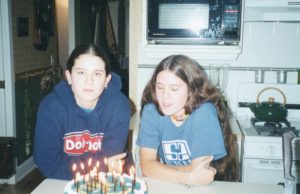