Fetish artist Rick Castro reflects on hookup culture in the queer underground of ’80s LA, before masked faces and fear of intimacy became the norm

His name was Joe Files. I met him on Santa Monica Boulevard, near Curson Avenue, late 1986. I was driving west and immediately noticed him, walking east, because he was wearing leather chaps over Levi 501s. An instant turn on for me. I made a U-ey and pulled up alongside. With my window already rolled down, I shouted, “Hay, do you wanna take some photos?” This was my usual pick-up line during the era of 1986 through 1996; the decade of my most prolific output of photo documentation on the hustlers of Santa Monica Boulevard. “Sure!” was his immediate response. He jumped into the passenger seat of my 1967 Mercury Cougar, and off we drove. He told me his name was Joe …. we hit it off like a house on fire.

With my camera and kink bag in tow, we drove to the original Southern Pacific Railroad freight yard in downtown Los Angeles (the present-day location of Los Angeles State Park), then a decaying relic from the era of train travel. With gilded train tracks and oil-stained gravel as backdrop, I handcuffed Joe and brought him to his knees. There I photographed him as the leather submissive that he was. The grey hankie hanging out of his back, right-side pocket was an indicator of who he was. The hankie code; another relic of an era now gone. 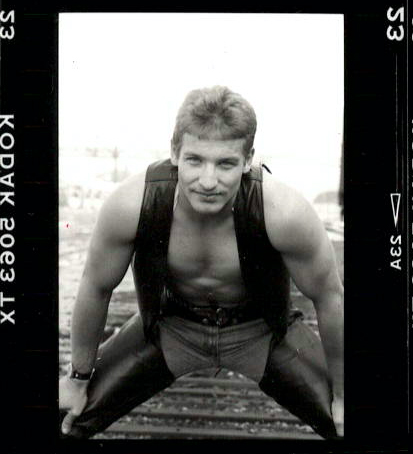 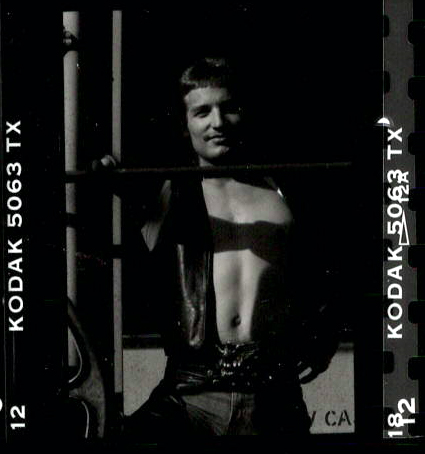 I walked Joe, still handcuffed, over to the train cars, and we climbed into an open cargo car. I stuffed his grey hankie in his mouth, laid him down on the dirty wooden floor and had my way with him. I did so a few times later that evening, then the entire night at my apartment on Ardmore Place. My apartment walls were lined from top to bottom in thick, black rubber that also covered the windows; serial killer chic. Black rubber walls were aesthetically pleasing and also worked perfectly as a backdrop for my numerous fetish photoshoots. At the time, I was very thorough. Every item had its place. My minimal apartment was functional for three main things: sleeping, photoshoots, and fucking. I used my refrigerator only to store film. All food was eaten at restaurants, but for occasional takeout.

Joe had a gruff but soft voice, like a kitten purring through gravel; dusty blond hair, and steel grey eyes that twinkled with pleasure as I rammed my dick up his arse. All the while firmly hog-tied with his leather chaps still on. Easy access for an all nighter… Awwww… Lust-filled memories from the ’80s!

Following one last morning shag, I drove Joe back to Santa Monica and Curson Avenue where I’d picked him up 28 hours earlier. Believe it or not, we passionately kissed good-bye. I then watched Joe walk away into the early morning sunrise, leather chaps over Levi’s 501s, with a grey hankie dangling from his back, right-side pocket.

Anonymous hookups with strangers were the norm of the era. Historically, GLBTQ people had no choice but to express themselves clandestinely. And even after the plague (in this case, AIDS) hit in 1982, it only felt more outlaw. For me, the ’80s was all about finding who I was sexually—I had worked non-stop and I was successful, which was a good thing, however a decade of all work and no play makes Rick a bad boy. Carnal encounters with complete strangers would be ordained by body language, eye contact, and primal instinct. 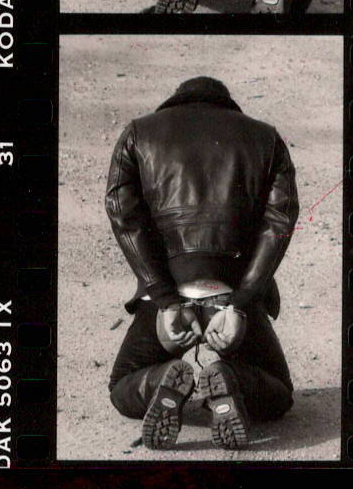 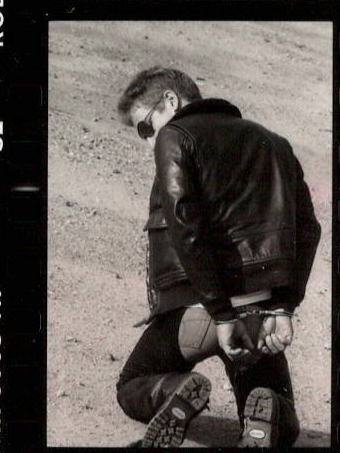 It may seem reckless from a modern point of view, but at least it was REAL. Real-time first impressions are real, awkward cruising is real, anonymous sex is real. As someone who has lived through the sexual revolution—a child in the ’60s, a teen in the ’70s, and an adult in the ’80s—it’s no surprise that I don’t find any appeal in chat rooms, hook-up sites, swiping right or left like you’re shopping for a pair of sneakers. Human interaction isn’t always as complex as we make it out to be.

During my formative years, sex wasn’t political. It was powerful and revolutionary, but non-political. Fetish and desire were always free of political correctness, and allowed one to delve into the dark side of intimacy. This was only possible because it involved consent between two adults, or sometimes a few adults, in the case of three-ways, four-ways, and orgies. Since the quarantine lockdown I’ve sequestered myself in self-isolation in the High Desert of Southern California. The only way to meet someone here, where the nearest neighbor is two acres away (and most likely a Trumper), would be online. This puts me in a new state of celibacy, something I’m not excited about being in once again, after going through all the homo growing pains of coming out; to myself, then to family, then as a kink, then as a fetish artist. Celibacy in my golden years is dumb, but I don’t envy all the complexities one is now forced to navigate in the pursuit of sexual activity.

Life during plague has numerous challenges. For young people, it’s dire, however, I get the impression they don’t seem as affected about it as someone of my… stature. This is my self-elevated way of not saying I’m too old to get it. Virtual relationships are the norm. Grindr, Scruff, and Snapchat are the gay bars of now. Gay bars—one safe spot for GLBTQs to let their synthetic hair down, be who they are, and meet one another—were already on their way out, and few will be able to stay in business after lockdowns in every major city. Over the decades, the gay bars have become corporate-owned watering holes where straight girls can throw their bachelorette parties and feel cool. Reality stars brand their establishments as “gay-friendly” while red velvet ropes and bouncers allow in only the chosen few who make the best photo opp and can afford bottle service. Generations of zoomers will have no idea it was ever any other way. 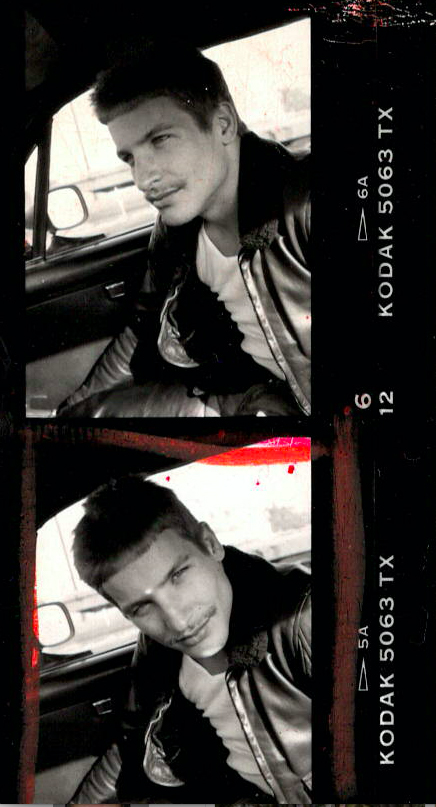 I’ve lived through plague once before within the GLBTQ community with AIDS. In the harsh 2020s, COVID-19 makes AIDS seem like a head cold, but don’t take this as me making light of the impact of AIDS. As a young adult, I went to more funerals than my 60-something parents. It was an era when I lost numerous friends, including the love of my life. Isolation from the indifferent mainstream powers that be were a death sentence for many of us. Reaganworld was willfully ignorant in addressing the situation. This was all calculation that allowed the unwanted to perish. Silence truly equaled death. But Trumpworld is so much more insidious than someone from my era could ever think possible—a reality star preaching to his army of faux evangelicals that what they are experiencing is not really happening. The only reason there’s a pandemic is because we’re over-testing! Once that stops it will go away.

Life during plague will test the core of who we are, as we’re forced to find new ways to be in lust and love. I don’t know what made me want to reminisce about a time when sex was easy, but everything else was tough. What triggered my memory with a stranger from the streets of Hollywood a long time ago? Maybe it was coming back in LA, to a city of masked faces in comatose trauma. Walking at least six feet apart from one another, afraid to cough or make eye contact. And if we accidentally do, all I see in their eyes is fear. Fear of catching a disease with no cure, fear of intimacy and healing human touch. I thought you might like to know how things once were during a small window of time, a very long time ago.

Photos and documentations of Rick’s experiences on Santa Monica Boulevard (1986-1996) became the script and my first co- direction of a film, Hustler White, (1996) with Bruce LaBruce.