At Dia:Beacon, the Detroit techno pioneer explores the collective euphoria of the dance floor, and the loneliness of the comedown

“I’d drink Patron straight from the bottle and then share the bottle with fans. That ritual is now over,” Carl Craig tweeted hours before we spoke on the phone. “Sharing used to be caring. Now it’s just plain dangerous.” The Detroit techno legend was quarantined at home in Detroit, where General Motors, Ford, and Fiat Chrysler were agreeing to suspend production to stop the spread of COVID-19. Michigan’s governor had announced last call at bars and clubs statewide. Craig had planned a few days’ downtime after his live set with Moritz von Oswald at New York’s Dia:Beacon on March 7; the opening celebration of Craig’s sound installation Party/Afterparty, a commission that developed over the course of five years. Self-isolating during an escalating pandemic wasn’t exactly what he had in mind. But as the existential proverb goes, shit happens. “Shit is going to happen the way shit is going to happen,” he says. “This is, in my mind, like when 9/11 happened. Everything screeches to a halt.”

In retrospect, his installation is unnervingly prescient. In Dia’s post industrial basement level, the darkness glows neon green, and modular synths steadily build up to a euphoric club beat—the sound of collective fervor right before the inevitable comedown. Eventually the crowd dispersed and people drifted off towards their respective hotels—or, in my case, a more remote B&B I’d booked last-minute—unaware that would likely be our last party for months to come. “It’s funny, we lucked out because at least we had a good opening weekend, because of course [Dia] is going to be closed for at least a couple of months,” Craig says. Obviously he hopes more people get to experience the installation when the museum eventually reopens. But he doesn’t see this moment as the end of the world—as least not of the world as we know it. After all, it wasn’t over Patron shots at the club, but in Detroit’s bedrooms and abandoned factories, where techno first harnessed urban decline and discontent to imagine possible future worlds—ones inspired by Blade Runner and robots as much as existing reality. “Techno has always been about imagination,” Craig says, recalling how he and Derrick May would sit on the floor of May’s loft in ’80s Detroit, experimenting on drum machines and predicting a Planet Earth of the distant future. “Watching real life happen second-by-second—it takes away a lot of where your imagination can go.” 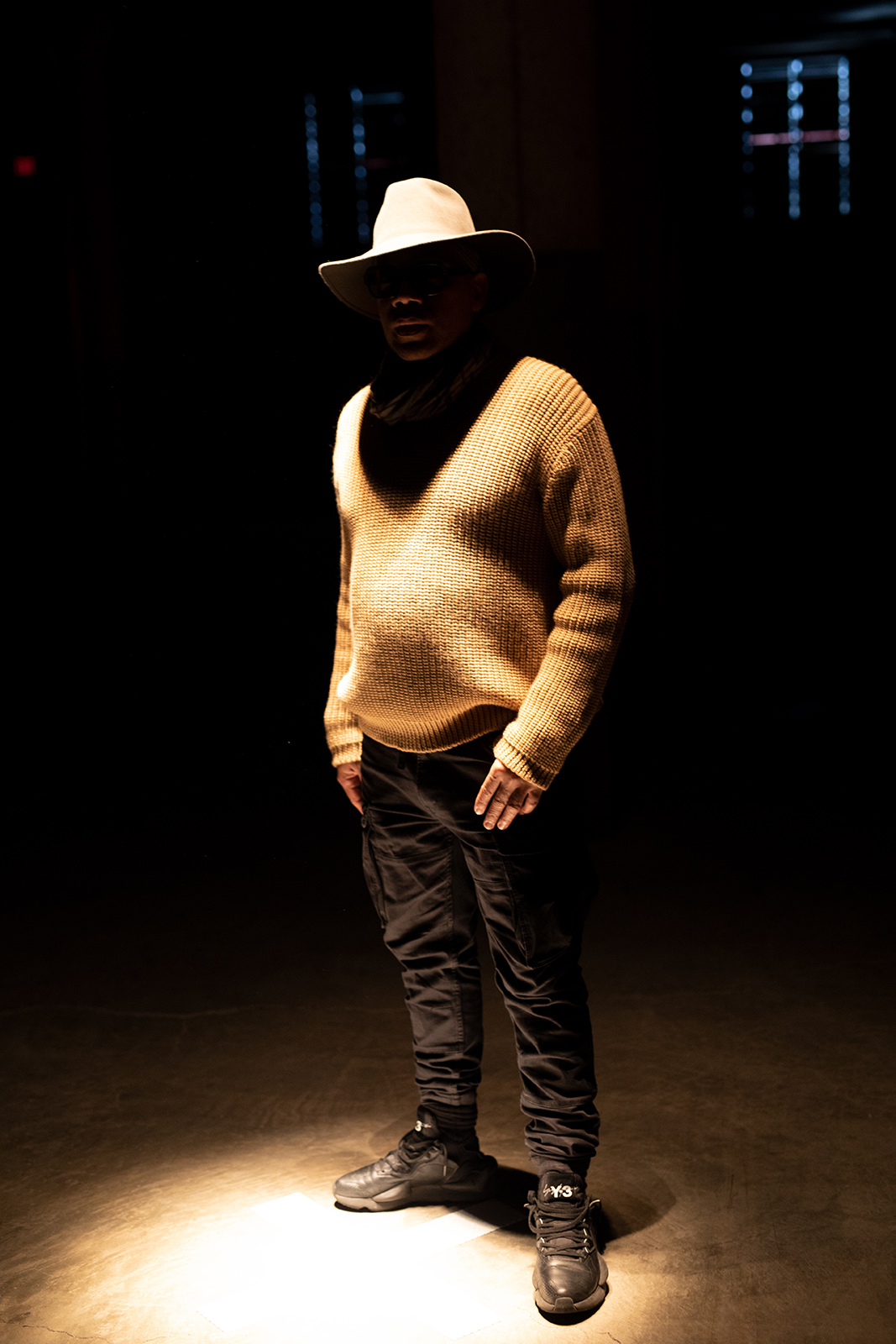 Hannah Ongley: You’ve been visiting Dia:Beacon for five years. What was your first impression of the museum and the space of itself? Why is the architecture of this industrial space appealing?

Carl Craig: The architecture is important because of Detroit’s manufacturing history. That space the exhibit is in could be at the Packard [Automotive] Plant here in Detroit, it could be at the old Fisher Body Plant—it could be at any of those factories that are unused now. That definitely makes Dia:Beacon feel like the right home for doing this project.

Hannah: So what kept you going back to Dia for five years?

Carl: Over those five years I started learning more about Dia and learning what they had in their collection. Not only in the [Beacon] building, or even in the Chelsea space, but the works they maintain in Utah and Marfa. Going to 101 Spring Street was just incredible for me—the logic of preserving a whole building that Donald Judd had, exactly the way it was when he left in the ’90s. It’s really about the legacy of the artist, instead of just the legacy of what he put on canvas or what he displayed as artwork. Taking how he lived and making it something that is preserved. In Barcelona, they have [The Picasso Museum]—but Picasso is a superstar when it comes to art. Outside of the modern art world, I don’t think so many people would even think of Donald Judd as being like Picasso.

When Detroit was going bankrupt, [the creditors] went straight to the Detroit Institute of Art and said, ‘Okay, you’ve got hundreds of millions of dollars right here in artwork. Let’s sell ‘em!’ When people don’t have respect for art, when they don’t have the love or passion for it, the first thing they think of doing is selling the property and selling the artwork.

Hannah: You could say that about music too, in a way—with techno music sampling obscure sounds from history, or with minimal techno, specifically, preserving the foundational elements of the genre. Is that something you think about too?

Carl: Yeah, but I wouldn’t compare it [to the Dia project] in that way. I would compare it to Elvis’s house, I would compare it to the preservation of Graceland. But who preserves it, you know? Is it the Presley family? Is it the City of Memphis? Is it the Memphis [Brooks] Museum of Art? If it was an art institution that said, ‘Okay, we’re going to preserve everything that’s Elvis, and keep it exactly the way it is, so 200 years from now, you’re going to look at this as being a living piece of art’—that would be incredible. But as far as music is concerned, I can’t reference anything that’s been done in that way for techno music, or for rap music. Maybe there are some places in New York for jazz musicians. In London you get a plaque, right? The blue plaque that goes outside of the house where Karl Marx lived where he was writing something, or maybe where The Beatles were holed up when they were living there. 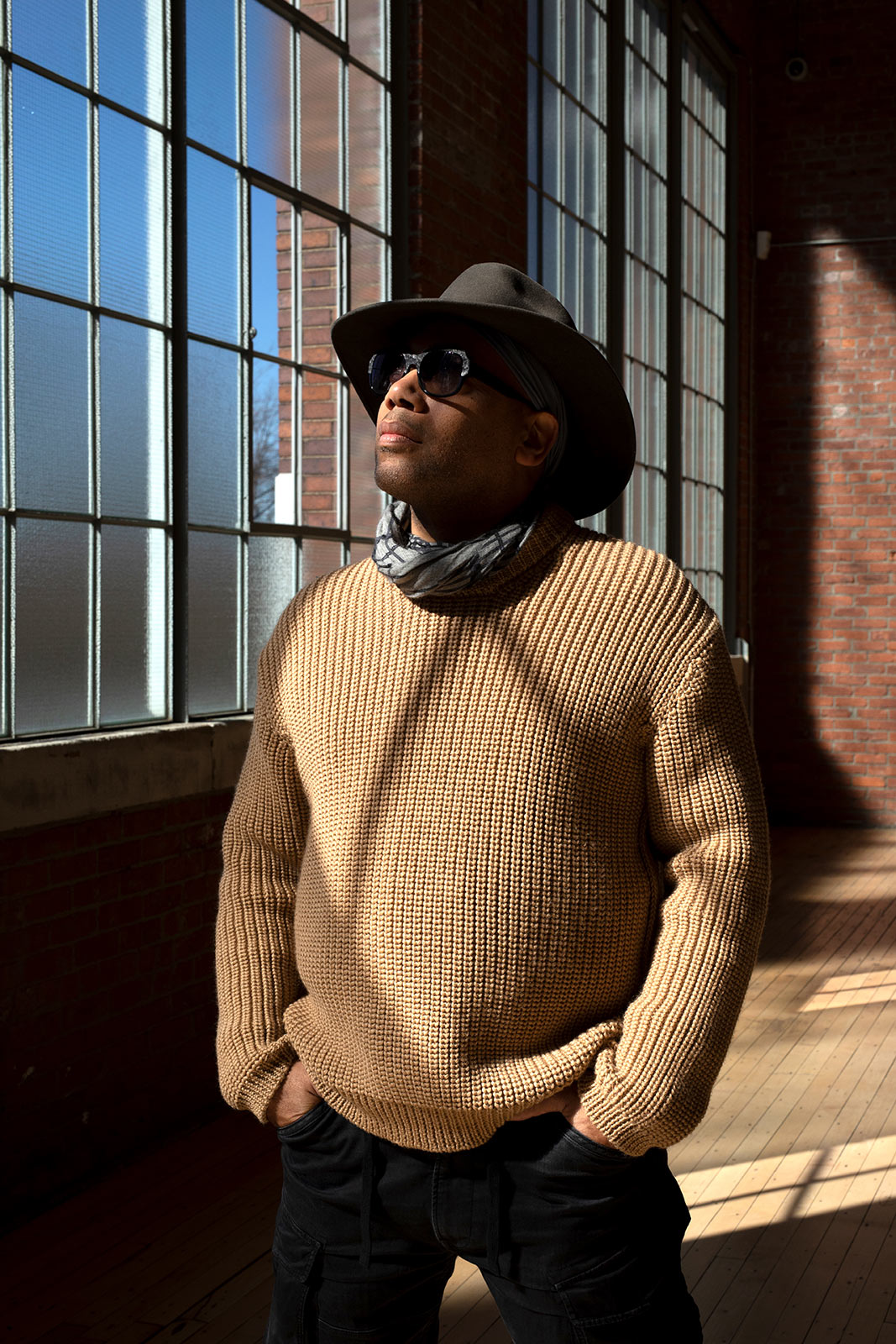 Hannah: Have you been to Theaster Gates’s Stony Island Arts Bank in Chicago? He’s archiving the whole record collection of Frankie Knuckles in there.

Carl: Yeah I know about it—I read about it when it was happening. It’s a firehouse, or something, that he has, right?

Carl: Oh, so they do like in Detroit, in Chicago? Okay, that’s cool [laughs]. Buy a piece of property for nothing and maintain it—it’s pretty good.

Hannah: So your Dia project explores, in a club context, crowd euphoria and the subsequent comedown. Does this mirror what we’ve been experiencing over the last couple of weeks with the quarantine and surrounding chaos? Do you think physical isolation can be a catalyst for creativity?

Carl: There are many people in the music community planning on using this as their way to catch up on making music, and that’s the same thing that I’m gonna do. Unfortunately, it’s something that could last a while, but there’s a lot of rest that I’ve lost over the last 25, 30 years of touring. So I get a chance to catch up on that, and to give my ears a rest, because I’m not on airplanes and at parties all the time. Maybe the issues I have with tinnitus can be lessened a bit because I’m not beating myself up. Then the mental aspect of it—there were many articles written about artists that were having mental problems based off of touring, so that could resolve some issues, as long as they don’t have their face stuck in a boatload of cocaine or something [laughs].

Hannah: When did you start collaborating with Moritz von Oswald? Do you remember the first music of his that you heard?

Carl: Moritz has always been a brother to me; a very positive voice, as far as music is concerned. With Moritz, there’s always a possibility to do anything. He never has anything negative to say about music. Moritz and I have known each other for 25 years, we’ve been working on an album together for quite a long time too, and that’s been a joy to do. The first music that I heard from him was Maurizio, which was an amazing release, as well as the Quadrant release, on my label Planet E. His sound—along with his partner-in-crime at the time, Mark Ernestus—was what made the sound of Basic Channel. The Basic Channel sound is a sound that so many people have copied and been influenced by for at least 20 years, maybe 25 years.

Hannah: How has your relationship to technology evolved over the last three decades? You’ve cited Kraftwerk as an early influence, and how Detroit’s changing industrial landscape has shaped your music. Are you still optimistic about technology and how it relates to humans?

Carl: In the early days of techno, Juan Atkins talked about how computerization and robotics and auto plants had a big influence on his sound. Ford, General Motors, Chrysler all still have a very strong presence here, even though we don’t see the factories; they are all automated. Computers have become an everyday thing—you know, I’m using a computer right now to talk to you on my phone, a little ass computer. It may come to finding that science-fiction influence—those same kind of futuristic ideas that robots were in 1984 and 1985—from other places and even within the imagination. Sun Ra always said that his thing was Saturn—he’s from Saturn, he’s not of this world. Jeff Mills always talks about going to Mars—Mars is like the new Beverly Hills or something [laughs]. There’s so much more than our Black Hole and our Milky Way. There are places that we’ll never experience in our lifetime or our children’s or our grandchildren’s lifetime. But there’s the possibility to use that imagination for the development of the art of making techno music. 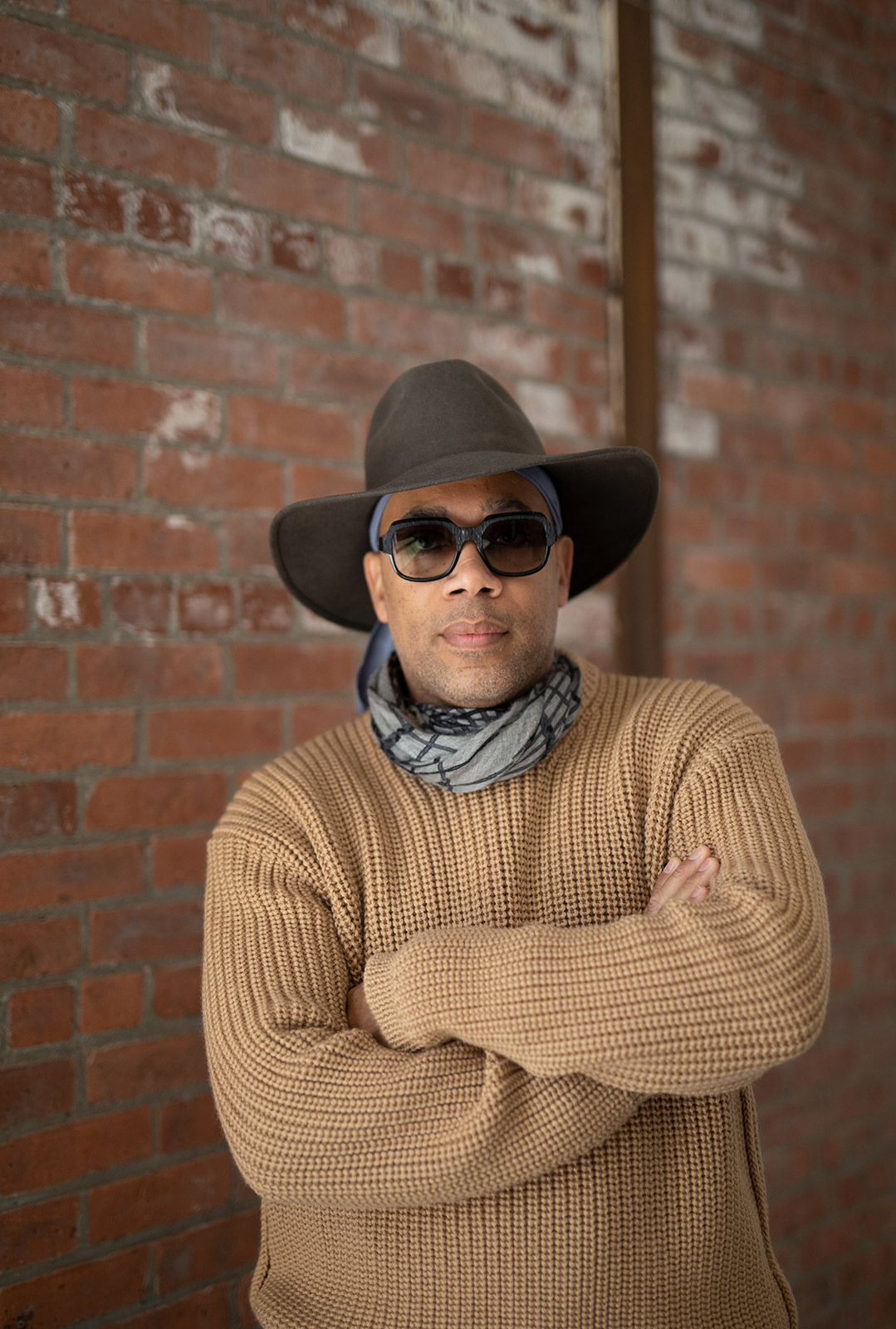 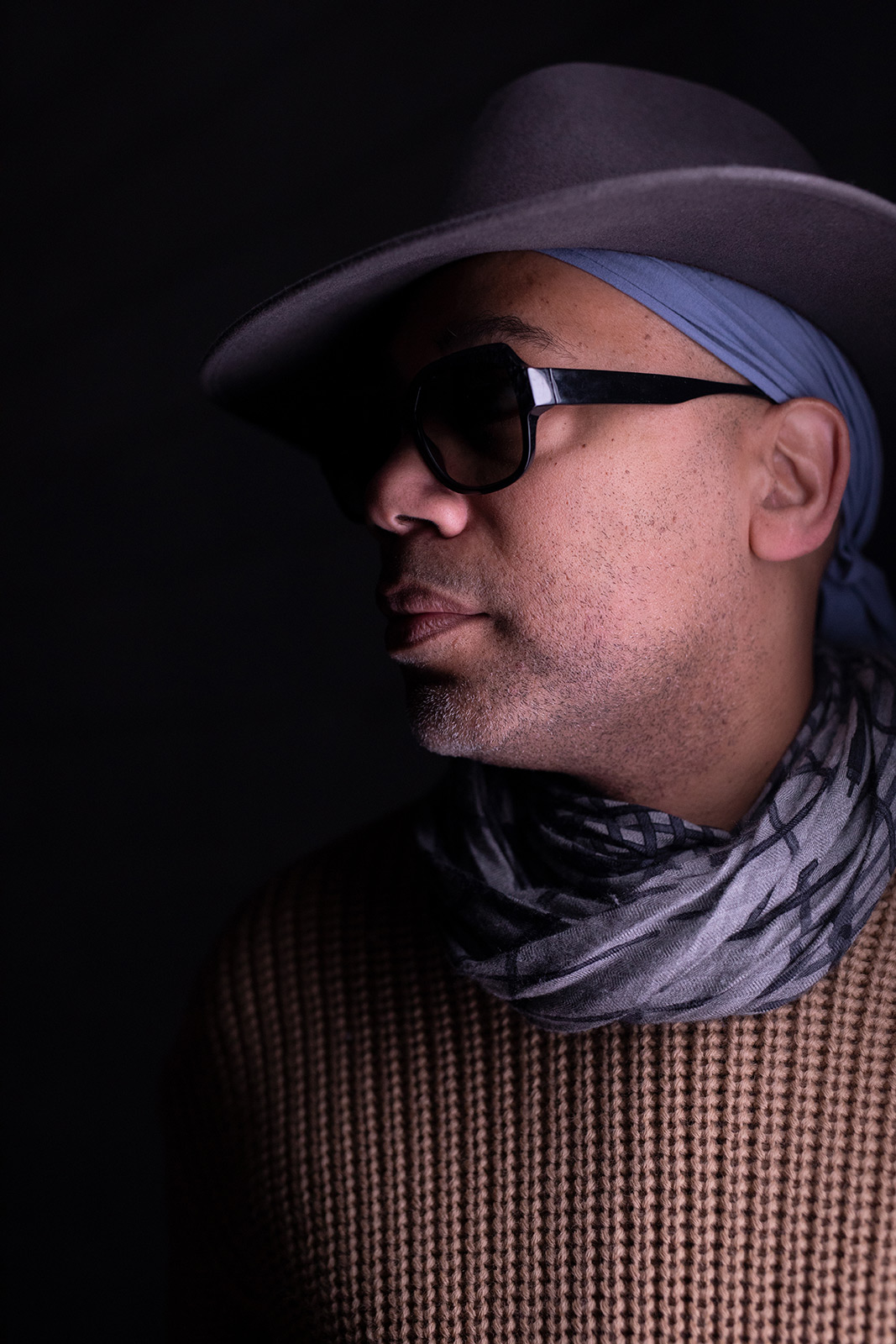 Hannah: Detroit techno has massively grown in popularity since the ’80s and ’90s, often becoming associated with nightclubs and festivals. What does Detroit techno mean to you today? And where do you see the scene going from here?

So much of how people see techno flourish nowadays, with Tomorrowland and EDC and Ultra, it’s supposed to be in front of 20,000 people. If it’s not in front of 20,000 people then [they] don’t think that’s techno. Techno is always about the imagination that you put into it. Derrick May and I, when we would create music at his loft, we had all the synthesizers and sequencers and stuff on the floor surrounding us. We would sit there with our legs crossed and play keyboards and drum machines with one of us handing off on another instrument. Our inspiration was Blade Runner, our inspiration was movies that were about the future and about the possibilities of what the future would bring to us in our lifetime on Planet Earth. So we’re talking 30 years later that we still have to use our imagination but our imagination can go a lot further.

Hannah: Do you think we have come very far at all in the last 30 years? Because it seems, when looking at those films you mention, like there’s this idea of a future that never eventuated.

Carl: I unfortunately don’t think that people are using enough of their capability to use their imagination to take the music forward. Music, especially black music, got to where it wasn’t about what could be the possibility. The ’50s were about making us free; in the ’70s, it was about the possibilities of everyone loving each other and disco music and all that—in the ’60s it was that too. In the ’80s, we were about futuristic stuff, in the ’90s, it was kinda going back a bit, into the jazz world and whatever, but definitely with G-funk into this more real thing that was happening with NWA and Dr Dre and Snoop Dogg. You had to be real. In trying to keep with that standard, I think, much of the imagination left music and it’s gotta be found again. 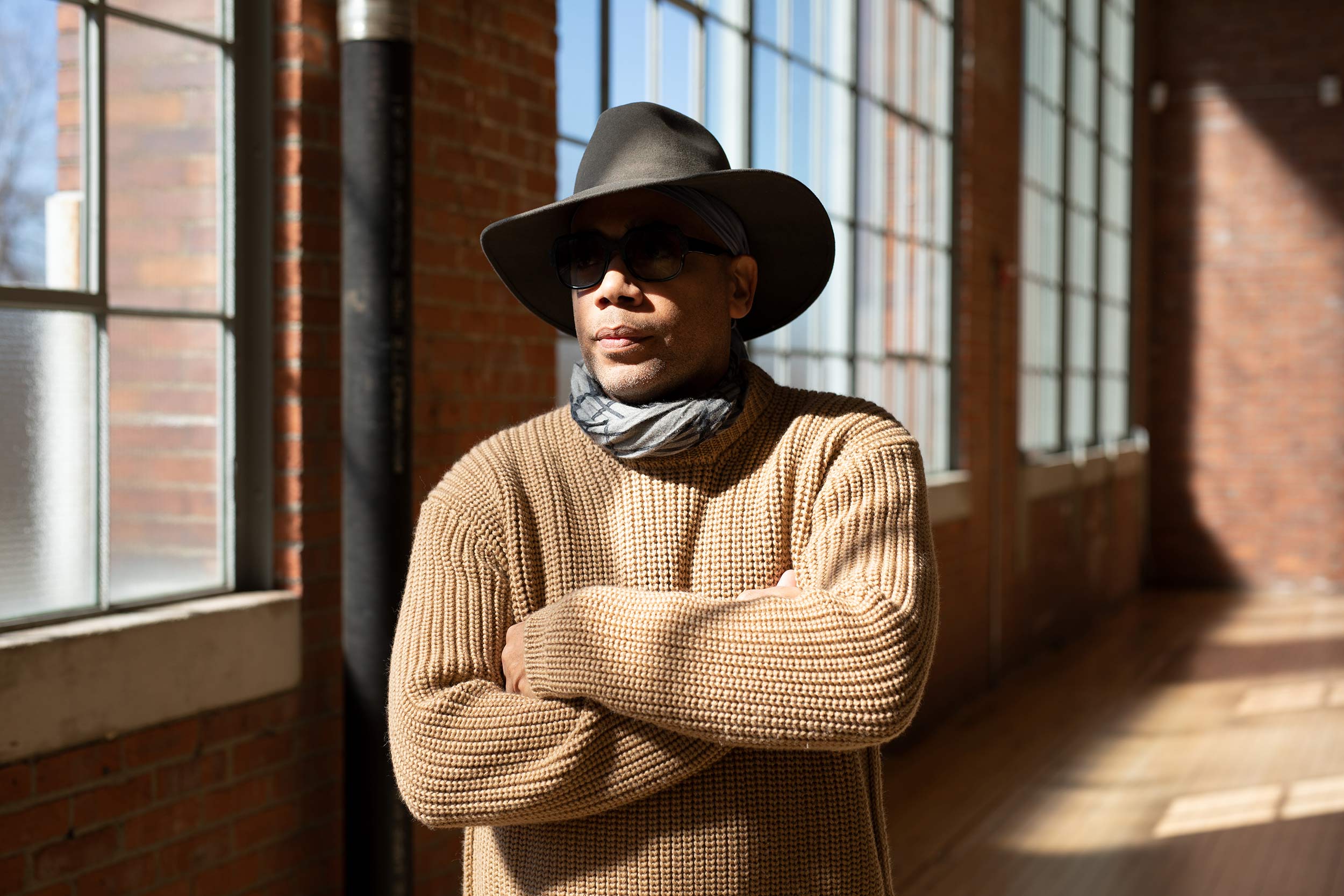